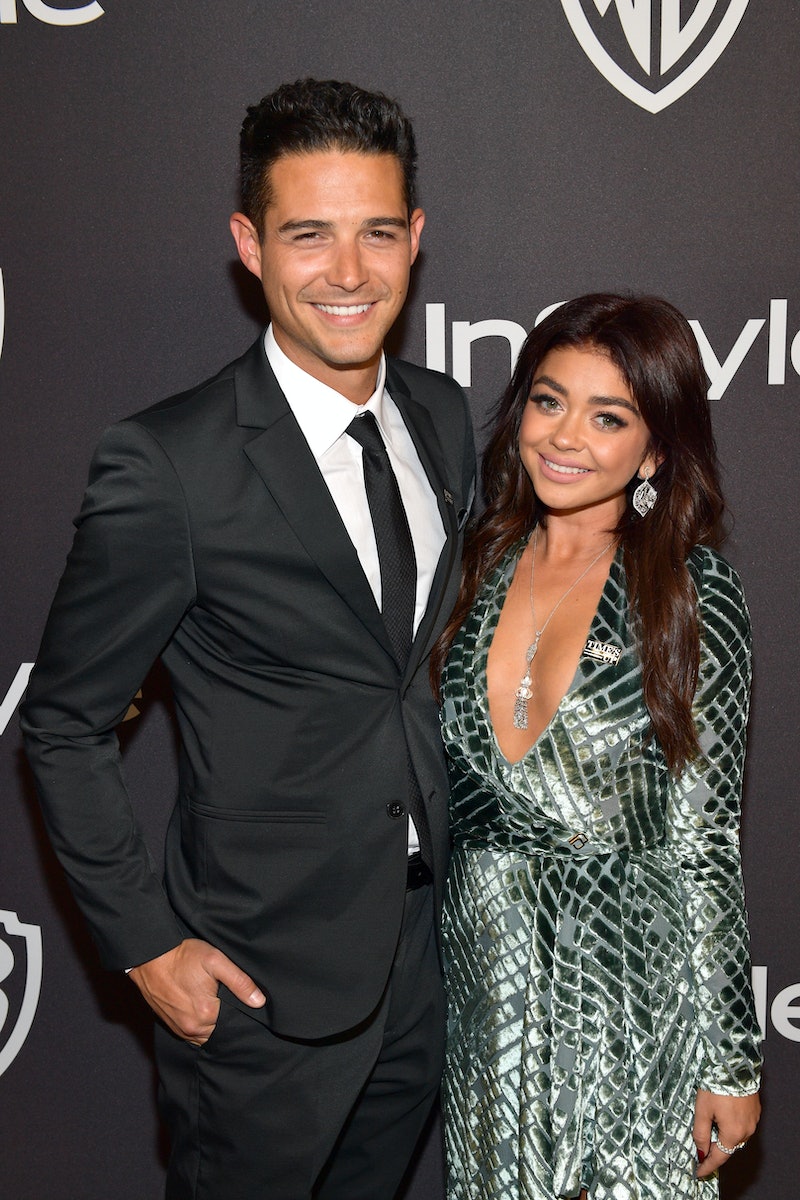 The countdown is on for Wells Adams and Sarah Hyland's wedding. In a recent E! News interview, Wells admitted that the pair "hasn't even really started" wedding planning yet. Even so, Wells named one wedding guest from Bachelor Nation who will get an invite during that same E! News interview. He said, "The easiest answer is Chris Harrison will be there."

Wells said it was obvious choice because of the role that the Bachelor host played in their relationship. He said, "Let's be fair, if it weren't for Chris and a couple of the other executive producers, I would've never even met Sarah. So, Harrison is an integral part of my happiness in general and I love him and now I get to hang out with him every summer, so I want him to be there." Wells is referring to his summer gig as the bartender on Bachelor in Paradise, which Chris also hosts. Hyland and Wells met via Twitter during his first season as the bartender on the show.

This lends itself to another question about whether or not Chris will officiate the ceremony, since he does have a lot of Bachelor wedding experience. This year alone, he officiated Arie and Lauren Luyendyk's wedding in January and Krystal Nielson and Chris Randone's ceremony in June.

Wells confirmed to E! News that Chris did offer to officiate the big day. But Wells said he wants Chris to "just have fun" as a wedding guest instead of "working" at the wedding as an officiant.

Wells isn't the only Bachelor favorite who wants Chris at their upcoming wedding. Jordan Rodgers also named Chris as the one Bachelor star that he and JoJo Fletcher want at their wedding. He told the magazine, "I know he’s a busy man, so I hope he can make it, but 100 percent."

Jordan told Us Weekly that he and JoJo "aren't in that circle" when he was asked about the possibility of inviting other Bachelor alums to their wedding. However, JoJo named Wells as one of the people she and Jordan were still in touch with from the show. They both met Wells during JoJo's season of The Bachelorette in 2016.

While JoJo and Jordan do not plan to have a Bachelor reunion at their wedding. Wells didn't address who else he and Sarah would invite from the show. Wells was a groomsman in Evan Bass and Carly Waddell's wedding. Plus, a lot of Bachelor alums shared their excitement when Wells and Sarah announced their engagement on July 16.

More like this
Hannah Ann Got Engaged 3 Years After 'The Bachelor' & The Proposal Was Dreamy
By Grace Wehniainen
Zach Reveals The Chaotic 30 Minutes That Were Cut From ‘The Bachelor’ Premiere
By Grace Wehniainen
Rachel Responded To 'Bachelor' Fan Theories About Her TikTok With Clayton
By Grace Wehniainen
Kaitlyn Bristowe Said Chris Harrison Ignored Her After Her 'Bachelorette' Hosting Gig
By Grace Wehniainen
Get Even More From Bustle — Sign Up For The Newsletter
From hair trends to relationship advice, our daily newsletter has everything you need to sound like a person who’s on TikTok, even if you aren’t.