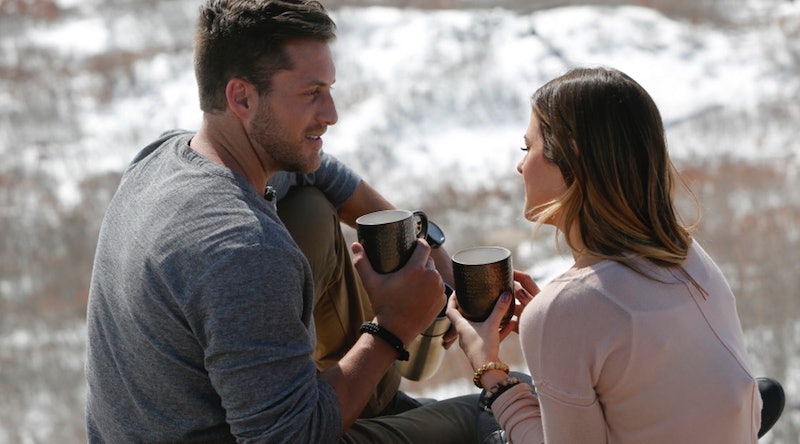 After Connor and Angela, another one of Chris and Krystal's wedding guests is headed to Bachelor in Paradise. Chase from JoJo's Bachelorette season is trading in the ski slopes for the beach. While JoJo eventually chose to become engaged to her current fiancé Jordan Rogers, Chase from Colorado was the second runner-up. A lot has gone down in Bachelor Nation with three more Bachelorettes since JoJo's season back in 2016. So while fellow JoJo suitors Derek Peth and Wells Adams may remember everything Chase went through on The Bachelorette when he arrives on Bachelor in Paradise, here's a refresher for everyone else.

Even if you had trouble placing him, Chase already made an impression on BiP when he made a joke about Blake at Stagecoach to Blake at Chris and Krystal's wedding. He didn't get much more screentime than that, but he'll be back once he enters Paradise officially. And not too long ago, he was a regular fixture on The Bachelorette Season 12.

While it wasn't First Impression Rose-worthy, Chase had a memorable limo entrance when he rocked a pair of glasses and a fake mustache (for better or worse, not a real one like Dean's) to meet JoJo. He didn't land the first one-on-one date of the season since that went to Derek, but Chase's alone time quickly followed when he shared a steamy yoga session with JoJo in Week 3.

Chase stayed strong in group dates for the next few weeks until Week 6 in Buenos Aires. In the perfect crossover episode for Bachelor in Paradise Season 6, JoJo first went on a date with bartender Wells before letting him go. Then, she had a two-on-one date with Chase and Derek where the trio had to awkwardly dance the Argentinian tango. At the end of the date, JoJo gave the date rose to Chase while Derek was sent home crying.

After Argentina, JoJo went to Chase's snowy hometown in Colorado. But their love story ended in Thailand during the Fantasy Suite dates. Chase told JoJo that he loved her, but she didn't feel the same way and sent him packing before the overnight portion of the date. Throughout the season, Chase had a difficult time opening up so he became pretty mad that JoJo rejected him right after he was so vulnerable and emotionally raw. But he returned to the rose ceremony and — unlike Luke P. in Hannah's Bachelorette season — he didn't use this moment to try to win her back. Instead, he apologized to JoJo for his anger, solidifying his status as one of the genuine good guys of Bachelor Nation.

Chase lasted longer than his Bachelor in Paradise buddies, but he also didn't win JoJo's heart in the end. So, as his single status is still intact, he'll enter the dating fray alongside Derek. (Meanwhile, Wells will be a spectator while making cocktails and doling out advice since he has found happiness with fiancée Sarah Hyland.) While this will be Chase's first go at Paradise, he has been doing the reality TV rounds since The Bachelorette with MTV's Ex on the Beach and The Challenge.

Chase wrote in the comments of a recent Instagram post with Danielle Maltby how he regretted doing Ex on the Beach. But here's hoping that he won't regret going onto Paradise. And even if he does, at least he'll have a couple of friendly faces there from JoJo's Bachelorette season to keep him company.