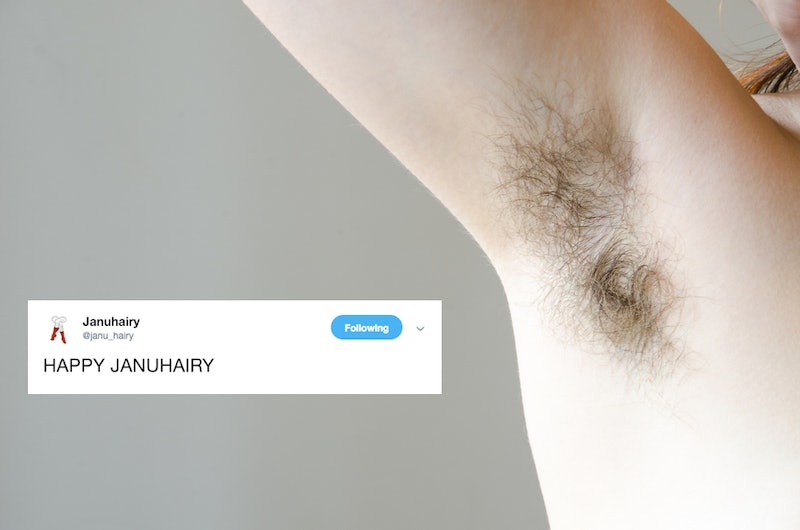 It is a great time of year to try new things. A time to take up new interests, make positive changes, drop negative habits, and maybe get involved in some socially conscious activities. Like let's say — ditching your hair removal routine? Say what? Now that is one positive change that sounds easy to undertake and far less stressful than taking up an activity you can't stand or juicing every single fruit or veg in sight. But what exactly is Januhairy?

Januhairy is a movement to get women to stop hair removal for the month of January in aid of charity, as well as encouraging women to both "love and accept" the naturalness that is body hair and just flipping run with it.

Founded by drama student Laura Jackson, the idea for the project came after Jackson was tasked with growing her natural body hair for a particular role. She felt the freedom (and I imagine lack of rashes) of ceasing hair removal, yet received flack from her peers. She told the BBC,

"Though I felt liberated and more confident in myself, some people around me didn't understand or agree with why I didn't shave".

Luckily though she has not been put off and has actually encouraged lots of women around the world to jump on board the movement and ditch hair removal for charity, and maybe forever.

Well, IMO this is an absolutely wonderful idea, and has been compared liberally to the brilliant and successful Movember charity, where men are encouraged to grow a moustache for the month of November and raise money for prostate cancer.

The vital difference however between these two movements is that, yes a man might look a little funny or different than usual with his moustache, but a woman who doesn't remove her body hair is often considered weird or gross. OK, obviously not by me, nor most rational people, but one slight glance at the comments under any of the articles I have read online about women's body hair shows inequality and misogyny are alive and well.

Hey guys (and I mean men), imagine if you were expected to remove your facial hair, leg hair, armpit hair, intimate hair (pubes), and then some? Resulting in a multitude of cuts, scratches, rashes, ingrown hairs— you know, all the sexy stuff that comes with hair removal. Imagine that choosing not to made you seem in some circles a complete grotbag and in other circles like an actual hero? Not just someone who chose to do what they want with their own body? There we go, choice strikes again. That darned inequality.

Now, don't get me wrong I know heaps of men who feel they have to remove hair, and some women who actually enjoy the process of hair removal, but it doesn't seem super fair does it, that it is almost universally expected of women? I know if you are a woman reading this you have apologised for body hair at least once in your life.

Did you know that last year was the first time ever an ad campaign for women's razors actually showed a woman with hair on her legs? In a press release sent to Bustle at the time, U.S. company Billie explained the decision, "Project Body Hair seeks to acknowledge and celebrate female body hair... wherever it is and isn’t." Think about it. Why the hell are the women in most ads shaving their utterly hairless pins.

So the Januhairy movement is born of self love and acceptance as Jackson told the BBC. "I realised that there is still so much more for us to do to be able to accept one another fully and truly," she said.

Which is why I guess, that she chose an utterly brilliant charity to be the beneficiary of Januhairy: Body Gossip. Jackson said,"Body Gossip is a charity that combines Arts and Education to empower everybody to be the best version of themselves and rock their own brand of gorgeous!"

Besides the potential personal growth (emotionally and physically), fact is, hair or lack thereof comes and goes with fashion. And right now, natural is in. So why don't you down tools and get to raising money for an excellent cause, save yourself an awful lot of time, and maybe learn more about you and enjoy a bit of self acceptance in the process?