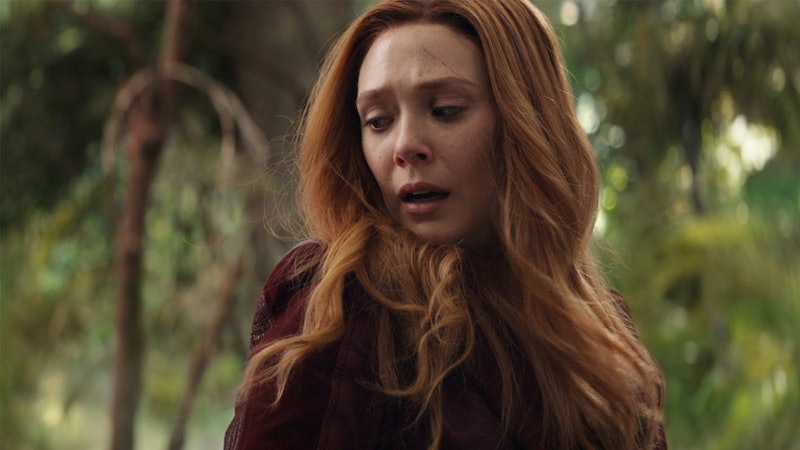 Like most Marvel movies before it, Avengers: Infinity War is chock-full of men. The next films from the studio, though? Expect the gender ratio to be totally different.

"I think if you see the Marvel universe go forward, it will construct itself in a very different way," says Infinity War co-director Anthony Russo, speaking alongside his brother Joe at New York's Four Seasons Hotel a week after the movie's release. In other words: from here on out, the Marvel Cinematic Universe stands to be much less male-dominated. In the 10 years since the MCU began with 2008's Iron Man, the Russos explain, the studio's movies have been filled with the kinds of "traditional" superheroes (see: male, white, straight) that, they've learned, audiences have quickly grown tired of seeing — February's blockbuster Black Panther is the sole exception.

"This first chapter of the Marvel universe... was conceived a decade ago, and obviously a lot has changed in media since then, and obviously Black Panther is one of the most important films in decades," says Joe. "So I think when you see this next book being written by Marvel, it’ll be a much more diverse and inclusive book. I think that’s what audiences want."

Looking at Marvel's upcoming schedule, it appears that representation is truly becoming a priority for the studio. In July 2018, we'll get Ant-Man And The Wasp, in which a female hero (the titular Wasp) is supposed to share equal screen-time with her male co-star. In March 2019, there'll be Captain Marvel, Marvel Studios' first-ever solo film starring a female superhero. Two months after that, we'll get the still-untitled Avengers 4, in which Captain Marvel is also expected to play a major role. In other words: in the post-Infinity War Marvel universe, women will matter more in the MCU.

And it's about time. While spending the last decade diving deep into the stories of Iron Man, Captain America, Thor, and Doctor Strange has certainly been fun, the lack of prominent female heroes in the MCU has become increasingly confusing. Just think of it this way: the first time rumors sparked about a Black Widow standalone movie, it was 2004. In the 14 years since, we've gotten three Iron Man movies, a second, re-vamped version of Spider-Man (only three years after the last Andrew Garfield-led installment), and an entire film about a wizard with a sentient cape (Doctor Strange), but no female hero lead a Marvel movie.

Of course, the Russos aren't unaware of the sheer math behind Infinity War. Of the 27 names featured on the film's poster, six are women (not to mention just eight people of color), and most of them have depressingly little to do. Black Widow, for instance, only shows up in a few scenes; Mantis has just a couple brief lines; and Pepper Potts appears once, solely to talk about her wedding plans. Even a scene in which several women fight Thanos together feels forced and exclusionary, due to the limited singular triumphs for ladies in Infinity War juxtaposed against plentiful hero moments for men like Thor and Captain America. The fact that the extremely short, female-only fight takes place in a literal divot in the battlefield, away from all the men, isolates its players even more.

When carving out the film's plot, the Russos explain, they were well aware of the gender imbalance they were working with, and so they chose to give the characters Gamora and Scarlet Witch, at least, prominent screen-time. "The fact that we knew that Thanos had such an intimate, complicated relationship, or could have, with Gamora... allowed a female character to take center stage in the storytelling and go to a dimension of the texture that normally doesn't take center stage in these movies," explains Anthony. With Scarlet Witch, meanwhile, the brothers decided to switch up the typical "damsel in distress" narrative so that, Anthony says, "Vision is the one in trouble, and Scarlet Witch is bringing the strength in that relationship to try to resolve the problem."

The dearth and lack of depth of many female characters in Infinity War is, of course, not entirely the fault of the Russos or the writers; most of the women, like Black Widow and Scarlet Witch, came into the movie having never received deep character development in past MCU installments. Infinity War's filmmakers may have tried to do its female heroes justice by giving more scope to two of the MCU's female heroes, but with the historically male-led Marvel landscape and the comparatively little screen-time given to female heroes in the past, there was only so much they could do.

But now, that male domination is hitting a turning point. In the Infinity War post-credits scene, audiences got their first hint at a future where men aren't the only heroes saving the MCU, when Nick Fury sends an S.O.S. call to Captain Marvel, aka Carol Danvers, to be played by Brie Larson. The Russos aren't directing her standalone film (that'd be Ryan Fleck and Anna Borden, the latter of whom is Marvel Studios' first female director), but they are making Avengers 4, and Anthony says they're thrilled by the "great opportunity" to bring in a central female character to that story.

"More so than ever before, these movies are global in their reach," the filmmaker explains. "So there’s an immense opportunity to engage. The United States is a bit of the bubble; there are parts of the world that are more forward thinking. And the opportunity to bring these stories to places in the world that aren’t quite as forward thinking is extremely exciting, and extremely powerful."

The potential for future feminism in the MCU is indeed promising — even a Black Widow standalone movie is starting to seem like a real possibility, with new reports that Marvel may be searching for a female director to take the helm. It's Captain Marvel, though, who might truly be the key to a female-led future for the studio. When her symbol appeared on-screen at the end of Infinity War, many fans took it as a sign that she'll be the one who brings down Thanos in Avengers 4. After all, Captain Marvel is the most powerful hero in the MCU, according to Marvel Studios president Kevin Feige himself, and so the idea that she might play such a significant role in the fourth Avengers film isn't a stretch in the slightest.

And even if it's not Captain Marvel who stops Thanos, it might be one of her fellow female heroes. A popular Avengers 4 theory suggests that Gamora is not dead but in the Soul Stone with Thanos and as such, will find a way to convince him to reverse his deadly finger-snap. Or perhaps it could be Shuri who saves the day, due to her scientific prowess. Thanos may have said in Infinity War that when the world faced extinction, he offered a solution — but the women of the MCU have another plan in mind.