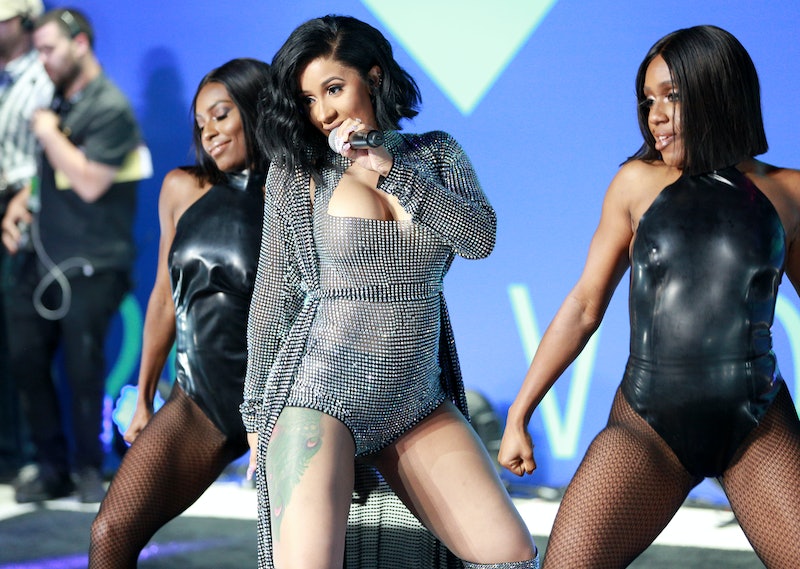 With all of the excitement surrounding the 2018 MTV Video Music Awards, you can bet that fans will be rushing home from work Monday, Aug. 20 to catch all of the action. But, what time do the VMAs actually begin? According to multiple reports, the big event is going to kick off at 9 p.m. ET/6 p.m. PT in a major way, with MTV's red carpet coverage starting at 8 p.m. ET/5 p.m. PT.

When it comes to having the best celebrity performances, the VMAs totally takes the cake. Throughout its three decade history, the awards show has captured some of the most iconic moments on stage. And when it comes to its 2018 show, it looks like the VMAs will continue to hold the coveted torch. So far, it's been announced that artists Travis Scott, Shawn Mendes, Logic, OneRepublic's Ryan Tedder, and Ariana Grande are scheduled to rock the main stage on Monday evening.

The legendary Jennifer Lopez will be taking home the Michael Jackson Vangaurd Award, making it a historic occasion for the singer, dancer, and actor. Lopez marks the seventh female ever to recieve it, and even more major, the singer is the first Latinx performer to be honored. Additionally, a special performance from Nicki Minaj has been added to the bill, also noting that the Queen rapper will be coming to the audience live from a "mysterious location." And MTV revealed Wednesday, Aug. 15 that Cardi B will be opening the show.

Though slated to be entertaining, the performances won't be the only things making headlines come the following Tuesday morning. The awards categories made way for some pretty steep competition this year. When addressing its bountiful amount of celebrity-filled, gender-neutral categories, MTV said in a statement, "The list includes dozens of artists whose reach and influence have elevated music's relevancy within the cultural conversation." And no, "dozens" is not an understatement.

With nearly 20 categories — ranging from "Artist of the Year" to "Best Cinematography" the awards show did an awesome job at recognizing some of the biggest artists and creatives over the past year. Everyone from Childish Gambino and his viral music video "This Is America," to The Carter's magical visual "Apesh*t" is amongst the heavy list of contenders. But the artist present in most of the categories is none other than the year's biggest breakout star Cardi B. The Invasion of Privacy rapper is nominated a total of ten times, with The Carter's and Childish Gambino coming in close behind with eight and seven noms, respectively.

After broadcasting from The Forum in Los Angeles for the last few years, the VMAs is heading back to Radio City Music Hall in New York City — where the show was held the very first time in 1984. Radio City brought the show some of its most entertaining moments, and only time will tell what magic will be made during Monday night's event.

Needless to say, missing out on this year's awards show isn't a viable option for fans. And so making plans to catch the ceremony live Aug. 20, 9 p.m. ET/6 p.m. PT should be a top priority.

More like this
Everything To Know About The 2023 Grammy Awards
By Jake Viswanath
Beyoncé & Blue Ivy Performed A "Brown Skin Girl" Duet At Her Private Dubai Concert
By Brad Witter
Jennifer Coolidge Slid Into Ariana Grande’s DMs In The Most Iconic Way
By El Hunt
Ariana Grande Just Wore The Chunkiest Knit Sweater I've Ever Seen
By Dominique Norman
Get Even More From Bustle — Sign Up For The Newsletter
From hair trends to relationship advice, our daily newsletter has everything you need to sound like a person who’s on TikTok, even if you aren’t.