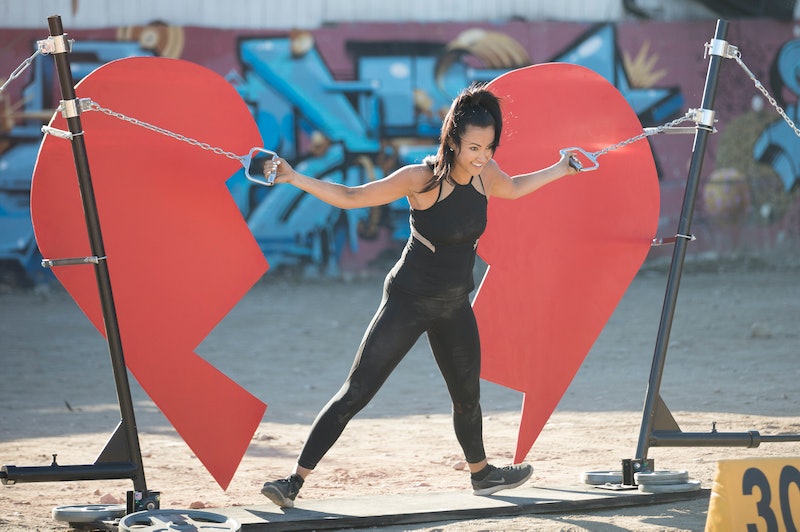 After her fierce showing in the Bachelor's Strongest Woman competition during Week 3, you may be more intrigued by dancer Sydney. Although she lost to Onyeka during the group date, Sydney on The Bachelor is still in the competition for Colton's heart. Unlike other Strongest Woman finalist Catherine, Colton gave Sydney a rose so she'll be traveling to Singapore in Week 4. And as the number of contestants begins to feel more tenable, now's the time to get to learn more about Sydney.

As Sydney Lotuaco shared in the first Bachelor episode, she lost her job to be on the reality TV show. Before pursuing Colton, Sydney was a Knicks City Dancer — the dance team for the New York Knicks basketball team. Although her LinkedIn doesn't share exactly when she landed the NBA gig, the Instagram account for the Knicks City Dancers referred to her as a rookie for the 2016-2017 basketball season. But as Colton's Bachelor season filmed in the fall of 2018 and the NBA regular season started on Oct. 16, she couldn't perform during the 2018-2019 basketball season and search for love on national television. But she's still getting a chance to show off her moves and flexibility to not only Colton but to an entire audience of Bachelor viewers.

As her Instagram notes, Sydney left her home of Virginia Beach for New York City. Her LinkedIn states that she earned a BFA in dance at Marymount Manhattan College in 2014 and the 27-year-old has stayed in the Big Apple ever since. And even before she graduated, she had a career as a dancer. Her bio for a HATCH Presenting Series piece from 2013 stated that Sydney had already performed in four nationwide Liberty Tax commercials, danced in a music video, and modeled for Dance Spirit magazine.

Sydney also has a connection to another popular TV show — So You Think You Can Dance. She began dancing at Denise Wall's Dance Energy in Virginia Beach. If that name sounds familiar it's because Wall is the mom of So You Think You Can Dance runner-ups Travis Wall and Danny Tidwell. (Wall adopted Danny when he was 12 years old.) Travis has gone on to be a choreographer for the Fox competition series and Sydney learned choreography from both Travis and Tidwell.

Sydney is also a fitness instructor, as she referenced during her stretching session with Colton in Week 3. She has taught barre at the elite Physique 57 since 2014. But she noted on her LinkedIn that along with dance, health, and fitness, she's also interested in acting and modeling.

While viewers may still be getting acquainted with Sydney, she was actually one of the first contestants that Colton met. She appeared on The Ellen DeGeneres Show alongside Annie (who was eliminated in Week 2) and Katie before the Bachelor season began filming. They played the game "Know or Go" and just like the Bachelor's Strongest Woman competition, Sydney was a runner-up.

If Sydney will end up being a runner-up on The Bachelor is yet to be seen. But you can keep up with Sydney's dancing and modeling pursuits and get some insight on her personal and family life on her Instagram. (You can also laugh along as she tries to figure out Twitter, which she just joined in November 2018.) Because even if she doesn't end up with Colton after The Bachelor, Sydney could very well grace TV again with her graceful moves.