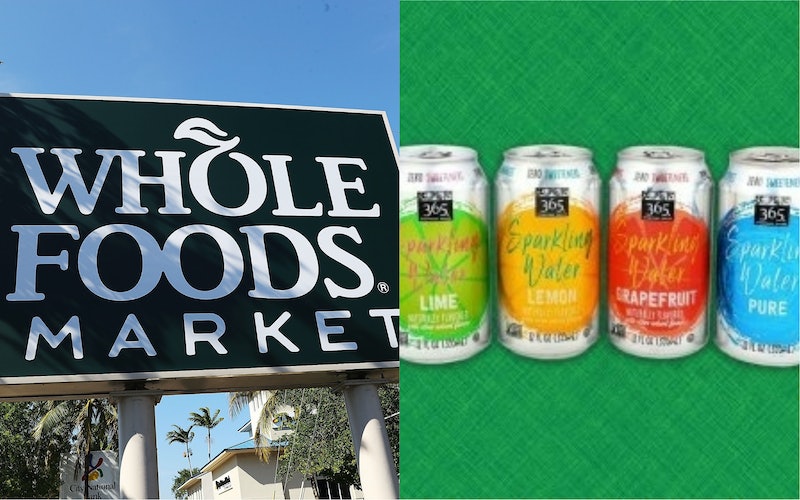 To paraphrase a modern-day proverb: in the cutthroat world of sparkling water, one day you’re in someone’s mini-fridge, and the next, you’re out. And it looks like Whole Foods is getting in the sparkling water game. Spotted at stores in the San Francisco area, Whole Foods is offering a sparkling water deal on their store brand (365 Everyday Value) flavored seltzer water. If you felt something, that was just La Croix shaking.

According to Quartz, some Whole Foods stores are offering a huge discount on sparkling water to Amazon Prime members. Those users, once they download the Whole Foods app and sign in with their Prime account, can get a 12-pack of 365 Everyday Value sparkling water for just $3.99...plus another pack for free. Yes, friends, it’s a buy-one-get-one deal. (Ah, BOGO: the battle cry of my people.) To reiterate, that’s $3.99 for 24 entire cans of sparkling water, the fizzy life sustenance that’s maybe kind of bad for our teeth but at least getting us all to stay hydrated this summer.

For context, La Croix usually runs about $3.99 for a single 12-pack in most parts of the country. In San Francisco, Whole Foods sells 12-packs of La Croix for $5.99. So, this recently spotted deal a pretty significant discount for Bay-area seltzer lovers.

Don’t start relocated to the Bay-area just yet: the BOGO deal is being offered in Whole Foods across the country, according to Delish. Prime members nationally enjoy the two-for-one deal, double-fisting the 365 Everyday Value water, which currently come in four flavors: lemon, lime, orange, and grapefruit. Whole Foods will also be adding a fifth flavor to their sparkling water roster, a spokesperson for grocery chain tells Quartz. It’s called “pure” and will be a ginger-flavored sparkling water. Based on the name, I’m assuming there will also be ethereal notes of simplicity and a general aura of genuineness.

Recently, Whole Foods expanded its Amazon Prime member benefits to include twelve new states. In addition to enjoying 10 percent off sale items throughout the store, Prime members who shop at Whole Foods can also take advantage of monthly deals on certain products. For example, in May, Prime members could get a special discount on produce like strawberries. According to Grub Street, Whole Foods in Florida rolled out BOGO-deals on their sparkling water in May as well.

It’s not clear whether this seltzer sale, now expanded country-wide, is limited. Regardless, I’m sure it won’t stop you from stocking up like it is.

If you’re looking to expand your sparkling water palate, the world is your fizzy watered oyster. The brand Phocus offers caffeinated sparkling water, which is essentially the hydrating lovechild of La Croix and coffee. Pepsi launched a line of sparkling water called bubly earlier this year, if you’re looking for a more approachable, mainstream seltzer to sip on. If you’re more a fan of Trader Joe’s than Whole Foods, you have more than a few options. The Trader Joe’s Sparkling Spring Water comes in classic flavors, like lemon and lime, as well as more unique flavors like Island Colada and Cranberry Clementine. Plus, they come in a 99 cent, one-liter bottle, which you can share if you want to and have that kind will power.

Basically, if you’re in the market for cheap carbonated drinks, you have more than a few options. Sip on, my fizzy-loving friends.