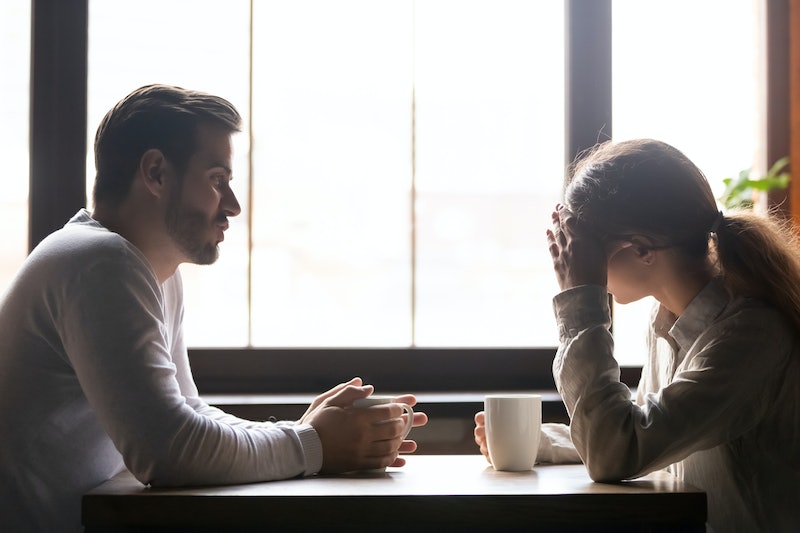 While it might seem like a new relationship with a new person would bring about a brand new you, research from the University of Alberta has shown that changing partners doesn't always change old relationship patterns, according to Science Daily. Instead, the study revealed that, after a failed relationship, folks tend to recreate the same dynamics all over again with their new partner, especially after the honeymoon phase (AKA, the most fun phase) of the relationship has ended. And that's news worth considering, especially if you're looking to make a more lasting connection.

The eight year study followed 554 participants, and surveyed them at various points in their old relationship, and then again in their new one. Seven aspects were reviewed, including satisfaction, frequency of sex, ability to open up to a partner, how often they expressed appreciation for the other person, and confidence in whether the relationship would last.

According to Matthew Johnson, the lead author of the study and a University of Alberta relationship researcher, it was found that all but two aspects remained stable across the past and present relationships. The exceptions were frequency of sex and expressing admiration for their partner. Both increased in the second relationship, which, he said, is to be expected since these aspects are directly dependent on a partner's behavior.

"Things get worse as a relationship ends, and when we start a new one, everything is wonderful at first, because we're not involving our partner in everyday life like housework and child care," he said. "The relationship exists outside of those things," which is another reason why it might seem easy and great in the beginning. But even then, the study showed all old patterns still come back.

"Although some relationship dynamics may change," Johnson said, "you are still the same person, so you likely recreate many of the same patterns with the next partner." That's why it isn't who you are with that leads to change, but what you bring to the table.

There are, of course, other potential factors, including expectations. It's not uncommon, for instance, for people to "attribute the problems in a relationship to the other person," Audrey Schoen, LMFT, a licensed marriage and family therapist, tells Bustle. "They believe that if they could just find the right person, the relationship would be easy and there would be few conflicts."

The trouble is, this puts all the blame on the other person, which means you'll never end up addressing the role you play in a relationship, which then results in the same patterns cropping up again. And when they do, it can come as quite the shock, Schoen says, especially since the honeymoon phase can lull you into a false sense of security.

Old patterns can also follow you if you don't do the work to overcome them, but instead jump right into a new relationship without pausing to reflect. "If you have not healed your end of the relationship system, then you will repeat the same patterns and end with the same kind of relationship," Dr. Margaret Paul, PhD, relationship expert and author, tells Bustle. "For example, if you tend to be a caretaker, ignoring your own feelings and taking responsibility for your partner’s feelings, and you haven’t healed this issue, you will continue to attract someone who is a taker and expects you to give yourself up and take responsibility for [their] feelings."

Whatever the case may be, you'll find yourself with a new person, but in the exact same situation.

While this study may sound bleak, there is a silver lining. And it all comes down to making changes, instead of expecting the newness of a relationship — or a new person — to be what leads to relationship success. So instead of kicking back and expecting life to go well, simply because you got rid of your ex, it'll be about noticing unhealthy patterns and making an effort to overcome them.

If you are someone who's struggled in past relationships, and sees the same issues developing in your new ones, rest assured you're already on the right track. "Breaking any destructive pattern takes the ability to see the issue and then the choice to actively change," Kim Egel, LMFT, a licensed marriage and family therapist, tells Bustle. "If we're aware and are willing to take a introspective look at ourselves, with self work we will realize that nothing will change, until we change."

Once you spot a pattern, there are quite a few steps you can take. For one, you might consider going to therapy to address underlying issues that have made it tough to communicate with a partner in the past, for example, or to open up in a way that leads to a fulfilling relationship. Also, simply being open to the idea that old problems can come back may help you spot them before they take a toll.

If you're with someone new, and are expecting things to miraculously be different, this study shows it isn't likely to be the case. After the honeymoon phase ends, you'll find yourself right back where you started. But if you make a concerted effort to overcome unhelpful dynamics that have broken partnerships in the past, it may be possible to have a more positive connection going forward.