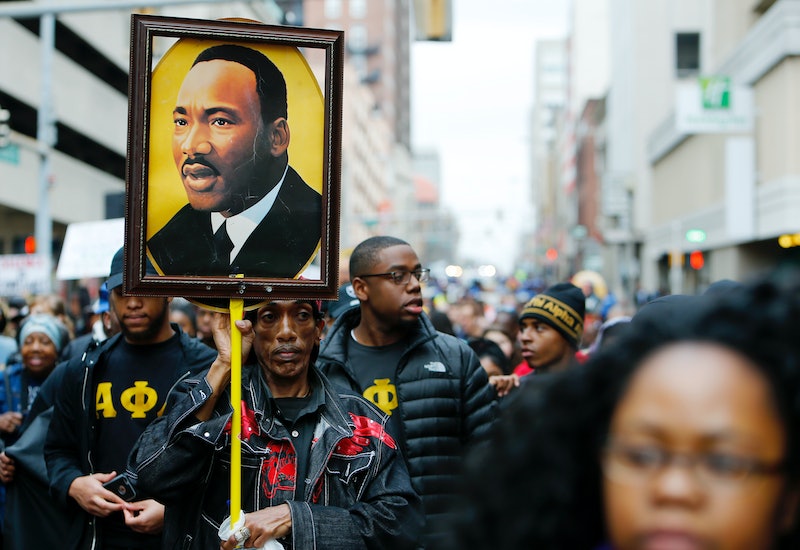 This year marks the 50th anniversary of Martin Luther King Jr.’s assassination on April 4, 1968. But as a country, in the half-century since King's death, we haven't come as far as many involved in the Civil Rights Movement would have hoped. Martin Luther King Jr. Day 2018, where we are asked to commemorate King's life and service, comes in the midst of a turbulent social climate, where white nationalists can openly march on college campuses and the president of the United States called Haiti, which has a majority Black population, a "sh*thole country." And that's why this year may be the most important year to celebrate King's legacy than any other in recent memory.

At the time of his death, MLK was fighting for issues concerning economic inequality, employment, full citizenship, and access to safe and affordable housing, and — perhaps in part because his activism was cut short — many of these issues remain a top priority for people of color, and especially women of color, half a century later.

Because of decades of discrimination, at the time of King’s death, obtaining quality housing was a major issue of concern for women, especially Black women. Redlining, the practice of refusing a loan to someone because they live in an area deemed to be a poor financial risk, by the federal government and banks made it nearly impossible for these women to own homes through the 20th century. And, according to reporting in Rewire, the challenges of finding and maintaining a place to live persist today; Black women suffer from eviction at disproportionately high rates across the entire United States.

Through noise complaints and other techniques, research show that mothers, in particular, are regularly targeted for evictions. Observing Martin Luther King Jr. Day this year gives a new opportunity to dedicate ourselves to address inequality in issues like housing and eviction that have been problems for far too long, and that continue to harm people in poverty.

In addition to housing rights, Martin Luther King Jr. was a champion of employment equality. He was major a proponent of the Civil Rights Act of 1964, the bill that created the Equal Employment Opportunity Commission and ultimately helped pave the way for employment protections for women in the workplace. But as the #MeToo movement has demonstrated, today, women are still a long away from having full access to a safe and equitable work environment. When Matt Lauer was fired from NBC for "inappropriate sexual behavior," it was also revealed that Lauer was being paid nearly three times more than his female co-host. (Lauer expressed “sorrow and regret for the pain I have caused” but denied some of the allegations against him, according to the New York Times.) As recent reporting showed, women who work in similar roles at the network can make millions less than their male counterparts.

The pay gap problem is not limited to the media industry, as women throughout the entire economy from the technology industry to major American corporations are impacted by pay discrepancies. Particularly at the end of his life, Martin Luther King, Jr. saw the issue of inequality in access to employment and housing as a systemic problem that prevented the United States from achieving its full potential.

“Now our struggle is for genuine equality, which means economic equality,” King told a rally of sanitation workers in Memphis on March 18, 1968, weeks before his death. “For we know now that it isn’t enough to integrate lunch counters. What does it profit a man to be able to eat at an integrated lunch counter if he doesn’t have enough money to buy a hamburger?” Fifty years ago King took a stand against these issues, and today it is more important than ever to pick up the fight.

But beyond rededicating ourselves to issues of economic empowerment that consumed King in his later years, the anniversary of his death also gives us a reminder of what creative, heartfelt, and innovative protests can accomplish. Whether through Black Lives Matter, the Women's March, or #MeToo, direct action activism is in the midst of a powerful renaissance, and there is much that can be learned by the life of Rev. King. Through his books and his activism, millions of Americans and people around the world saw that peaceful, non-violent protests can overcome the hate and vitriol of the forces that would divide society and continue to advance supremacy and inequality.

In our current age of increasing intolerance by some towards people of different sexual orientations, races, genders, and faiths, it is more important than ever that we rediscover the tools activists like King leveraged to advance a more expansive and inclusive society. It is always important to honor the legacy of the champions of civil rights. On MLK Day 2018, let’s reflect on how far we’ve come — and how far we still have to go.