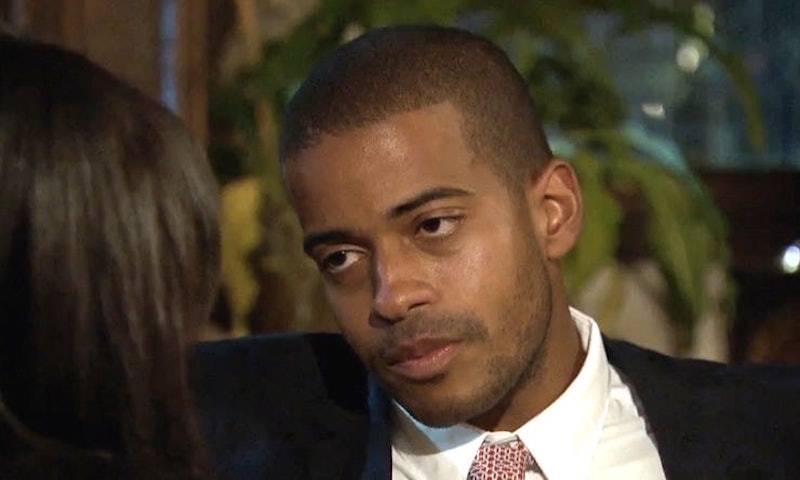 After what felt like years of teasing, Arie Luyendyk Jr. became the new Bachelor and people were... confused? Happy? Bewildered? Sad? There are a lot of emotions. But the biggest question is why Eric Bigger isn't the 2018 Bachelor instead — at least, it should be. Of all the candidates, he was one of the most promising, and the fact that the franchise reached back to Season 8 for the next Bachelor instead of going with Eric is something we need to examine.

Alongside Peter Kraus and Dean Unglert, Eric was one of the favorites from Rachel Lindsay's Bachelorette Season. His growth and maturity from a fun-loving guy who had never been in love to a mature, thoughtful partner ready for a serious commitment was as fascinating for fans to watch as Rachel's dilemma over who truly held her heart. The fact that Rachel was the first woman that he'd ever fallen in love with would have made him an unusual choice for a season devoted to finding him a wife, yes, but who could resist pushing the boundaries on people's suspension of disbelief with that kind of zero to fairy tale narrative? ABC could, apparently, because we're not getting a season of Eric. And he doesn't seem entirely thrilled about it.

This is particularly disappointing when you consider that Eric really did seem to have a shot. Mike Fleiss took a poll on who the next Bachelor should be that ranked Eric fourth behind Peter (who Fleiss said prior to the Arie announcement would not be the Bachelor), Wells (same), and Ben Z (who many assumed to be the Bachelor before Arie was announced). When asked about the possibility of leading his own season by US Weekly, Eric said, "It’s not up to me actually. It would have to be an in the moment type of answer. I’m open, you’ve got to stay open, cause things happen." Which makes it sound like he would have loved to do it if anybody handed him an official offer, so why didn't the series do that?

Rachel's season of The Bachelorette was lorded by Fleiss as "historic" because it was the first time in Bachelorette history that a black woman was leading her own season. An Eric season would be the first time in Bachelor history that a black man would lead one, though not the first time that a person of color led a season at all. I, like many other black women watching, rolled my eyes at lauding Rachel for making history when it shouldn't have taken as long as her season did to come, so I don't believe that Eric should have been the Bachelor based on being black alone. But I do think that ABC delivered a season with Rachel's unlike any that viewers had ever watched before, giving people more to talk about than the usual formulaic aspects of the franchise, so it's disappointing to see them returning to the white male mold.

Of course, there's always a chance that it could be a numbers game. Ratings for Rachel Lindsay's season of The Bachelorette were down a million viewers from last year, and though the finale drew in some of the highest numbers of the season, it was a decline from 2016's finale as well. And, as many a thinkpiece has studied before, "black" is treated like a monolith genre wherein the failure of one work with a black protagonist signals to executives that no others will succeed, no matter the story, stars, or actual genre. Perhaps it was too soon after the disappointing ratings from Rachel's season to try the same thing again on The Bachelor.

Or maybe it was just a matter of keeping audiences on their toes. With fans expecting Peter, Wells, Ben Z., Eric, Chase, or Dean as the Bachelor, the only way ABC could surprise them was by going all the way back to Season 8. The Bachelor has a formula that people have come to know, love, and complain about in equal measure; Arie was a shake up, even if, were you to place him in the line-up of all the Bachelors to this point, he looks like more of the same.

But the fact that Eric actually seemed to be in the running — that we could come so close and yet so far — still hurts. Rachel's season seemed like the start of something new for the franchise, which too often fell into the trap of playing it safe. Rachel may have been "historic," but that word, and perhaps even her chill toward the whole thing, seems to have tricked us into thinking she wouldn't be the only one of her kind. Her entire season seemed to be screaming "new and different," from the fact that she was announced as the Bachelorette before she was even eliminated from Nick's season to the fact that she broke the news that she was engaged before her season had even started airing. We got our hopes up too far, and, while Arie deserves a chance to find love, his selection as the Bachelor leaves a bitter taste in my mouth.

He may be unexpected, but he's nothing new. He's nothing different. He's not bringing anything to the table that we haven't seen before. Eric could have done all three and more and it was a mistake not to cast him.