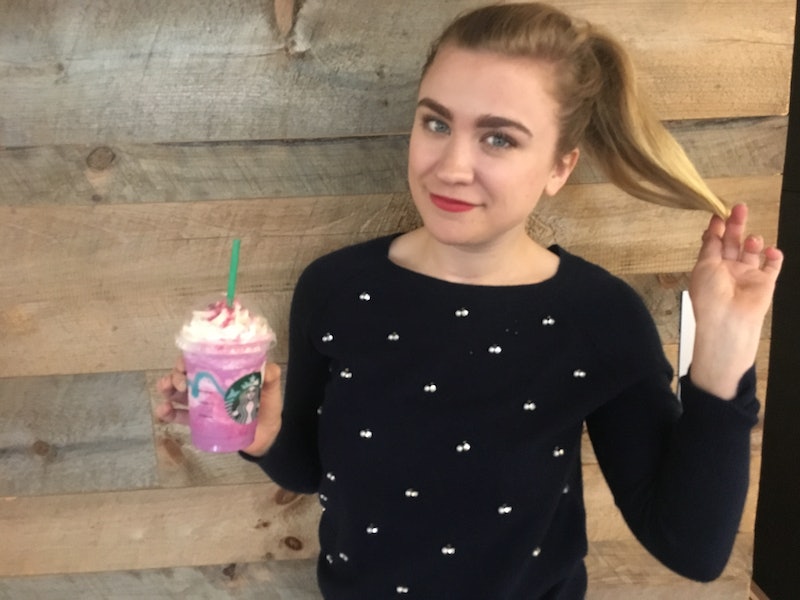 Yesterday, I had two tabs open on my computer when I woke up: one was the press release for the Starbucks Unicorn Frappuccino, and the other was a detailed how-to article on what to do to avoid the effects of nuclear fallout.

We all promised ourselves that we wouldn't normalize what has been happening since the election, and we've held to it. We tweet and e-mail and call our representatives. We meet up in the thousands for protests, either planned or impromptu. We encourage each other to vote given any opportunity we can. We haven't let it become the new normal, but a sneakier, subtler new normal has snuck in anyway: the constant cycle of incredulity, action, exhaustion, and helplessness that for many, has come to define this past year.

Enter the Unicorn Frappuccino: You love it. You hate it. You think you may have hallucinated it. You think it is the best thing to happen to Instagram since the rainbow bagel; you think it looks like Tinkerbell vomited and didn't stick around to clean up the mess. It doesn't matter what your relationship is with this drink. That's not the point. The point is that it has your attention anyway, and it's what your attention needs right now.

The Unicorn Frapp says, "Hey, look over here, nerd!" But only for a few minutes. But only for five dollars. This is the kind of cheap, accessible, ridiculous entertainment we need — something to focus on for just a hot second. Not enough to distract us from the scary Alt World we're living in, but just enough to afford us some sparkly, multi-colored, sugary sweet relief.

Our victories are few and far between today. Our victories are keeping immigrants in the U.S.; they're making sure people can still use the bathroom of the gender they identify with; they're getting a man accused of alleged sexual assault multiple times out of one of the most powerful positions in cable news. They are not things that we should have struggled to achieve, but things that should never have been compromised in the first place. 2017 has became the personification of "one step forward, two steps back".

In that regard, it's not surprising that this, of all years, is when the unicorn theme has taken the forefront. The Starbucks Unicorn Frappuccino is merely a peak to a unicorn-infested mountain the internet has steadily been climbing for six months now — unicorn hair, unicorn nail polish, unicorn milkshakes. The New York Times recently caught up with health and wellness blogger Adeline Waugh, who is widely believed to have kicked off the trend with her "Unicorn Toast" Instagrams; is it a shock to anyone that they started gaining traction in November of last year? That during this frustrating, heartbreaking, ridiculous post-election news cycle, the trend has only gained popularity since?

Unicorns, to many, represent so much more than just a pretty image on the internet. They are reminiscent of our simpler '90s baby childhoods, which were defined by Lisa Frank and Harry Potter wands with unicorn hair and The Last Unicorn on VHS; a time that was defined by economic prosperity and relative peace, so unlike today. And in their core, unicorns are pure and kitschy and sweet. They are easy to love, and easy to make fun of if you don't; they are uncontroversial, and silly, and above all, safe. You are allowed to have opinions about unicorns on the internet. And in that you are allowed, for a brief and merciful second that is as fleeting as unicorns are themselves, to pretend everything is OK, without leaning so far into the feeling that you forget to fight.

There is a long road ahead of us — not just for the next four years, but far beyond them. And as so many are reminding us, it is a marathon, not a sprint. If we are going to continue facing the reality of what is happening head-on and fighting back against it to the best of our ability, we'll need to properly fuel ourselves with some nonsense, too. It may be silly, and it may seem meaningless, but unicorns, in their own way, have become a form of internet self-care.