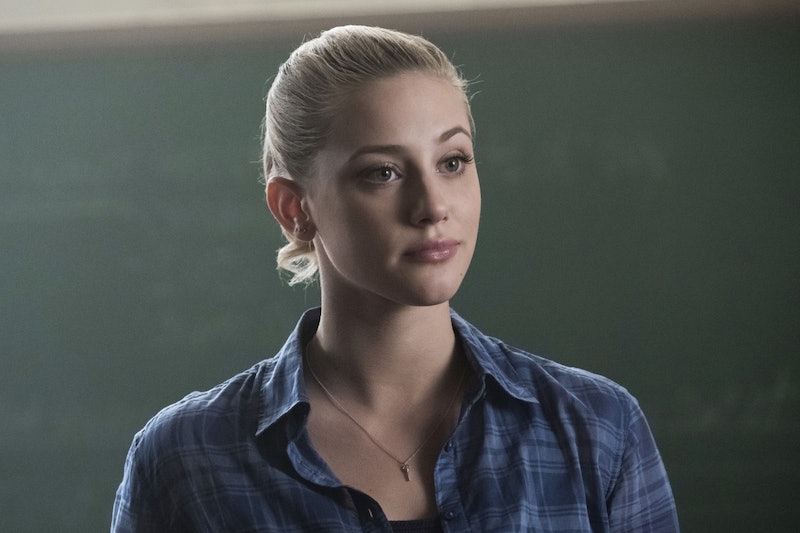 Sorry, Joaquin DeSantos fans, but it looks like he's not a member of the Cooper family after all. TVLine has confirmed that Riverdale Season 2 is introducing Betty's brother, but he's unlikely to be a familiar face. The site reveals casting is currently underway to cast Chic Cooper, who will appear midway through Season 2 to further complicate Betty's family dynamic. This means that the popular fan theory suggesting Joaquin was the son of Betty's mom — Alice — and Jughead's dad — JP —has more or less been debunked.

There is still a chance that Chic won't be who he says he is. Hal convinced Alice to give her son up for adoption when they were still in high school. The child is assumed to be his, but the baby's paternity has not been 100 percent confirmed. Part of the reason why the Joaquin theory made so much sense is because of Alice's history with JP. She has a Serpent past of her own, which led some fans to believe that Hal wasn't the baby's father. The show has to explore her Southside roots at some point.

Interestingly, Chic seems to be going by the last name "Cooper," and that suggests he knows about his parentage. It's possible Hal or Alice has been secretly providing for him since his adoption, or Chic may have found out he's connected to one of the most powerful families in Riverdale on his own. If the latter scenario is true then Betty and Polly's big brother is bound to stir up trouble.

That's not exactly good news for Betty. With Jughead going to school at Southside High, she's already dealing with a star-crossed romance — adding a the arrival of the long lost big brother she only recently found out existed is sure to add extra stress. And Betty doesn't do well with stress.

In Season 1, the perfectionist nature of the literal girl next door and the pressures placed upon her by her family often left Betty on-edge. The character's dark side came out on multiple occasions before she devoted herself to finding Polly. Those moments illustrated that nobody puts Betty in a corner — at least not if they know what's good for them.

Chic is a wild card at this point, but he has the potential to be a worthy contender for Betty. Having her embrace Chic without question would be way too easy. It's far more likely that his appearance will leave Betty wary as she tries to figure out if her brother is a threat to her family — or even her real brother at all.

Season 2 already has one mystery to solve: who shot Archie's dad? But this is Riverdale. The show excels at offering up twists. That's why taking Chic at face value would be a mistake. As a stranger, he's sure to be suspect, and not just in Betty's eyes, but in the whole town's. A long-lost child is sure to create curiosity in the community and put the Coopers in the spotlight in a way that's just as scandalous as what they went through last season.

Ultimately, Chic's arrival almost has to be good for Betty's arc this season. While Polly's plight gave her something positive to focus her energy on, Chic may reintroduce the world to Betty's darker instincts. And that's something that needs to happen. Seeing Betty subvert the good girl trope was one of the highlights of Season 1, so anything that offers viewers more of dark Betty goes in the plus column.

Despite Joaquin being mostly disqualified as a contender to be Betty's secret brother, the news of Chic Cooper's Riverdale homecoming is worth celebrating. This mysterious new character has the chance to hake a major impact on the Cooper family, and put Betty at the center of another killer storyline.