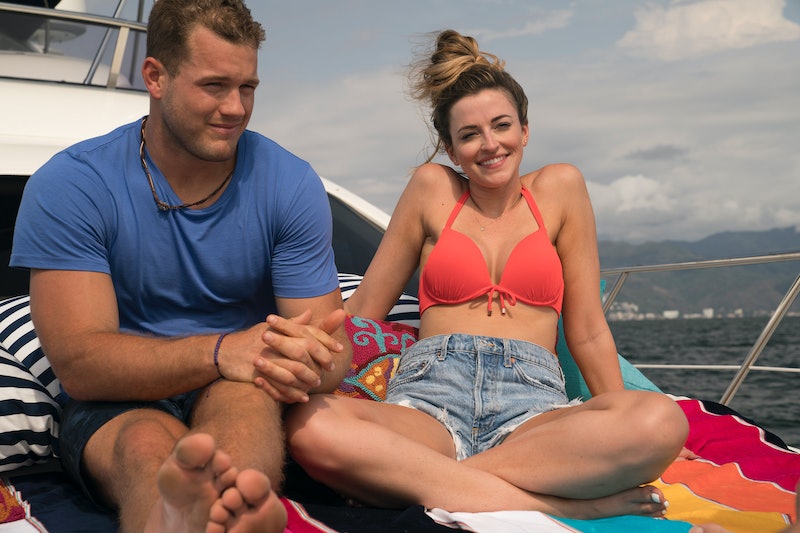 While the most recent season of The Bachelorette was mostly about helping Becca Kufrin get over her nationally televised dumping, another love story slowly crept into the world of Bachelor Nation. Anyone hoping that they'll see the conclusion of the romance of Tia and Colton at After The Final Rose should clear their Tuesdays for the rest of the summer, because their story is going to be told on the upcoming season of Bachelor In Paradise. Which, to be honest, is way better than a quick After The Final Rose hotseat.

The ongoing saga of Colton and Tia was left open-ended at the conclusion of this season's Men Tell All, with Colton and Becca both commenting on how they had moved past Colton's former association with Tia. However, the trailer for Bachelor In Paradise that was premiered earlier that night, promises the first televised interaction of Tia and Colton one-on-one, allowing them to talk to each other instead of just explaining their past together for Becca. On the beach in Mexico, to boot.

Since After The Final Rose is all about Becca's final choice — and since she has already commented on the Colton and Tia situation — it's safe to assume that there won't be much, if any, airtime during the special dedicated to Tia and Colton's history. If Tia and Colton are present during the After The Final Rose special, they'll likely be seated with the rest of the in-studio audience, serving up Bachelor In Paradise vibes.

There simply isn't much left for Colton to say about his time in Bachelor Nation that wouldn't spoil whatever happens on Bachelor In Paradise, which he definitely won't be allowed to do the night before its premiere. Judging from the trailer, the drama Tia brought to The Bachelorette is nothing compared to the drama between Colton and Tia promised on Paradise. The trailer shows each of them in tears, arguing about the connections they may be making with other people in Paradise. It looks like a lot goes on in Paradise and too much involvement from the two during the After The Final Rose ceremony could risk spoiling the season.

The two didn't speak during the Men Tell All, despite the fact that Tia was in the audience and Colton was being asked questions specifically about her by Chris Harrison, so it's likely that they also won't be seen speaking to each other during After The Final Rose.

The Tia-Colton situation has technically been stretched out along three separate seasons of television from different shows within the franchise — first with Tia's introduction in The Bachelor, then the introduction of Colton and discussion of their relationship in The Bachelorette, and now finally placing the two together in Bachelor In Paradise. It's a veritable sideshow.

While dedicated viewers may not want to miss any new chapters of this story, it's safe to assume that even if the two are present at After The Final Rose, there will be no updates or new information given as to their relationship status, or lack thereof. Colton and Tia may have shared "a weekend" before Colton went on The Bachelorette, but it appears that that "weekend" has lasted much longer than either of them anticipated.