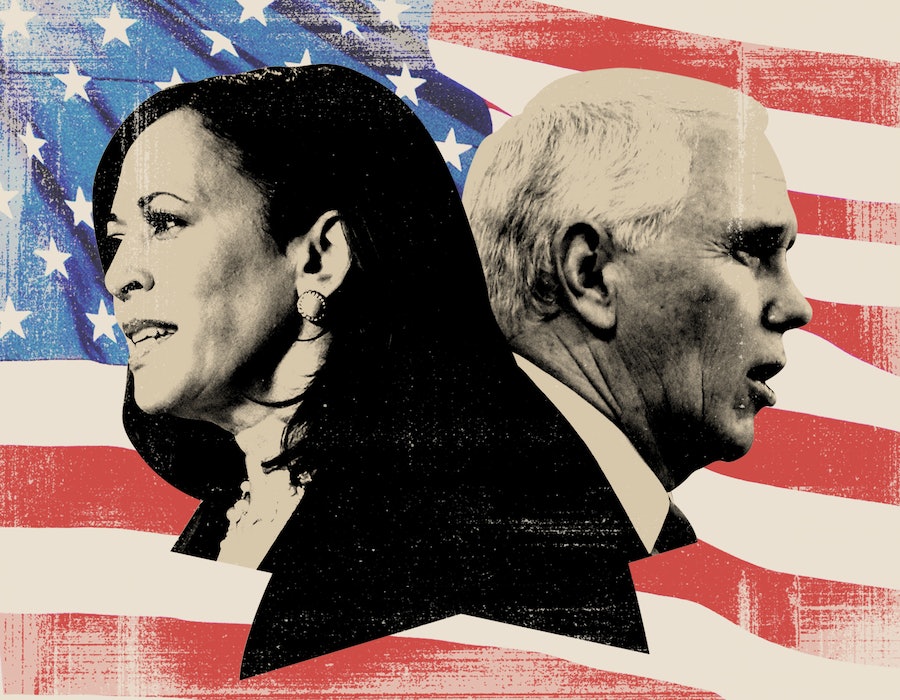 When Joe Biden announced Kamala Harris as his running mate in August, the California senator's pointed bravada seemed to complement the former Vice President's quieter affect. As author Kate Andersen Brower wrote for Bustle after the announcement, she expected Harris to embark on a "punch up" campaign, especially in the vice presidential debate, in which she'd attack President Trump, largely ignore Mike Pence, and thus allow Biden to focus on a positive campaign message. "Expect to see a Harris-Trump debate," she wrote, "even though Mike Pence will technically be her opponent."

I thought back to that story last night and how the past month's erratic news cycle has upended Brower's expectation. The president and first lady have both contracted COVID-19, as have at least two dozen people in their orbit. Chris Christie's last public statement on Oct. 3, after coming down with the virus, announced he was checking into a hospital as a "precautionary measure." Members of the White House residence staff have also tested positive.

And suddenly Pence, who was tasked with overseeing the coronavirus task force, seems as culpable as his running mate. Harris could then verbally attack them as a two-part dunce set, a political Tweedledee and Tweedledum. Her first line of the evening hammered home that message: "The American people have witnessed the greatest failure of any presidential administration in our history,” she said, seated more than 12 feet away from Pence, separated by plexiglass.

The pandemic overshadowed all other topics for the evening. For Pence, whose strengths as a debater come from his rhetorical nimbleness, it was impossible to wiggle his way out of a conversation about the virus. The plexiglass was a visual, constant reminder. (It is also why, perhaps, his team resisted it, saying they found it an unnecessary safety precaution.) "Their administration has forfeited their right to reelection," Harris said when talking about the pandemic.

The second question directed at Pence, from moderator Susan Page, focused on the Rose Garden event last week, in which Trump nominated Judge Amy Coney Barrett to the Supreme Court. Additional parts of the ceremony had been held indoors, where guests were photographed without masks. The festivities have since been viewed as a potential "super spreader" for COVID-19. Pence responded instead by talking about respect and how politicians would respect Americans by allowing them to make their own medical decisions. His response rang hollow. (It was also, worth noting, a far cry from the Republican stance on "my body, my choice.")

Harris responded in stride. “You respect the American people when you tell them the truth,” she said.

For Pence, whose strengths as a debater come from his rhetorical nimbleness, it was impossible to wiggle his way out of a conversation about the virus. The plexiglass was a visual, constant reminder.

The evening then fell upon two versions of truth. And without a fact-checker, the moderator naively allowed both versions to exist. "This is supposed to be a debate based on fact and truth," Harris said when talking about Biden's tax plan. Pence returned to a borrowed quote from the late Democratic Sen. Daniel Patrick Moynihan: "You're entitled to your own opinions. You're not entitled to your own facts." (He didn't attribute the line to Moynihan.) In one of the more egregious examples, Pence responded to a question about the existence of climate change — does he believe it? — by answering that, in fact, "President Trump has made it clear we're going to listen to the science."

The above notes aside, the most jarring part of the evening was Pence's refusal to admit a peaceful transfer of power should Trump lose on Nov. 3. Page didn't push him on this question, allowing him instead to pontificate about how Trump will win.

But the evening itself was not without lighter moments. Harris came prepared to withstand interruptions, likely in response to last week's presidential debate. “Mr. Vice President, I’m speaking,” she told him a few times. And “If you don’t mind letting me finish, we can have a conversation.” With the lines, she set the tone and refused to lose her allotted speaking time. And later, to the absolute delight of the Twitter set, a fly landed on Pence's head. It didn't alleviate any anxiety caused by Pence's answer, but it added two minutes of much-needed levity to the 90 minutes. Eric Lach, a staff writer at the New Yorker, tweeted, "the thing about the fly is that it knew when it’s two minutes were up [sic]." Pence, much like his running mate, often did not.