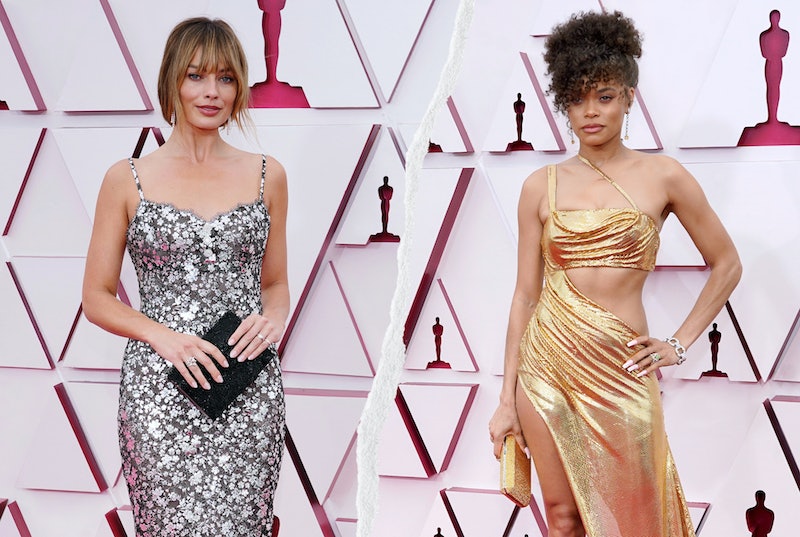 The 2021 Oscars red carpet is in full swing, with celebrities arriving at Union Station in Los Angeles dressed to the nines. While your favorite stars went all out at the event — wearing everything from see-through jumpsuits to sweeping red gowns to yellow cut-out dresses — the most memorable looks of the night were retro-inspired. Borrowing from decades past, some celebs chose to embrace ’90s and ’2000s trends on the Oscars red carpet.

Both ’90s and 2000s styles are enjoying a resurgence right now, with Crocs, velour jumpsuits, low-rise jeans, thong sandals, and slip dresses popping back up on the fashion landscape — and the Oscars 2021 red carpet followed suit.

Margot Robbie made an appearance in a black and white, floor-length ’90s slip dress covered in sequined embellishments. Questlove channeled the bygone era via its infamous “ugly” shoe, gold Crocs. And Andra Day recalled the 2000s in a metallic gown with an asymmetric neckline, ruching, and strategically placed cutouts.

But the retro look that sparked the biggest discussion on social media belonged to none other than Laura Dern. In a voluminous gown featuring a black long-sleeve top and feather skirt, the actress evoked Bjork’s infamous swan gown from 2001.