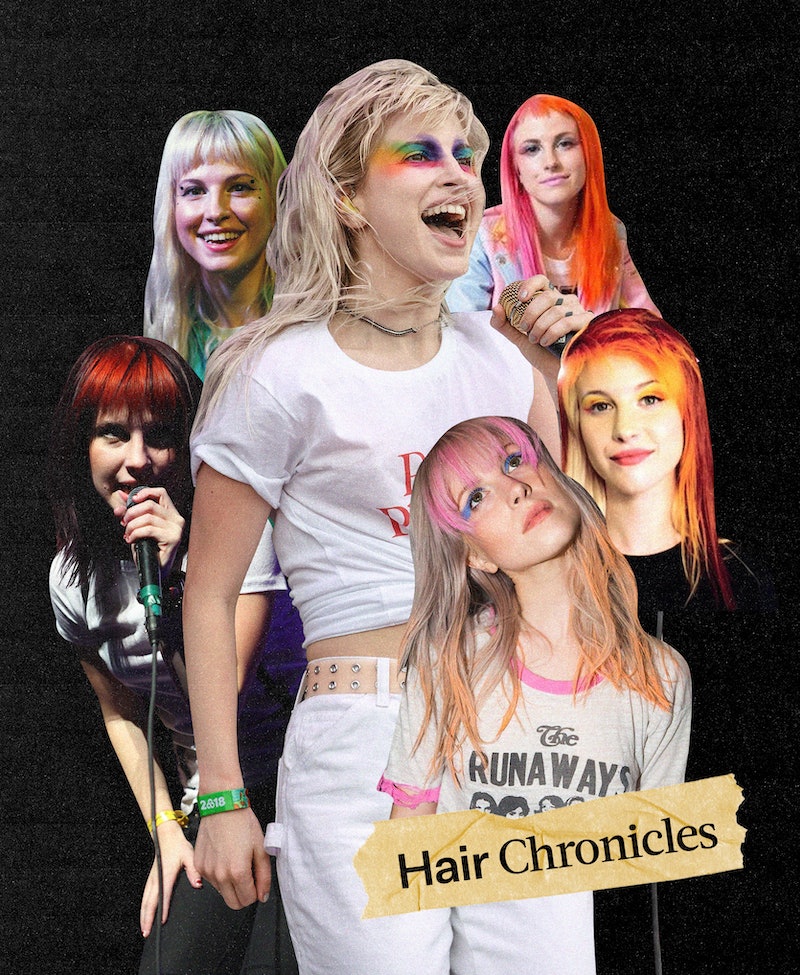 In Hair Chronicles, celebrities tell us about their most memorable hairstyles throughout the years, from the ones they’d wear again to those they completely regret. Here, Paramore singer Hayley Williams and her longtime hairstylist Brian O’Connor chat about bonding through hair color, experimenting with a shade that looked “awful” on her, and starting Good Dye Young.

Hayley Williams’ hair colors are more than just a signature look; reflecting on all the many (many) hues she’s worn, they’re actually a timeline of her life. And at one point, the Grammy-Award-winning singer made nine shade switch-ups in only a year’s time during a tour. “That was a terrible year for me and being creative with my hair and adding color was a very helpful thing for me to do,” Williams tells Bustle. “It helped me feel like I was able to have some sense of control over my own self.”

Her longtime hairstylist and makeup artist Brian O’Connor, who she met as a teen when her grandmother took her to an appointment at a hair salon called the Pink Mullet in her hometown of Franklin, Tennessee, has been by her side (and behind the salon chair) the whole time. “He was still apprenticing at the time and wasn't even officially part of their team, but he ended up doing my hair and we really liked each other,” says Williams. “The next time I came, I was getting ready to do a video with Paramore — our second music video ever — called ‘Emergency.’ I wanted my head to look like a matchstick that's been lit: dark to yellow to gold tips. He did that for me and I never really forgot it.”

When it was time to create visuals for the smash hit “Misery Business,” Williams tapped O’Connor and the rest was (hair color) history. Flash forward to 2021 and the pair are co-founders of vegan and cruelty-free hair color brand Good Dye Young, which specializes in vivid hues. Its newly-released Metalheads line, five shimmery metallics inspired by bands like the Yeah Yeah Yeahs and System of a Down, is the perfect example of how the two founders’ worlds, haircare and music, fuse together.

As punk rock went pop and hit TRL culture in the early 2000s, the duo was excited to see more fans emulating and embracing the fun color combinations they were dreaming up. “As creators, and even just on a personal level, it makes you feel so connected when you have a calling card and you find your people that way,” Williams explains. “Good Dye Young is a result of us wanting to not only start a bigger conversation about hair and identity, but also just to become a bigger part of the conversation that was already happening. We were trying to magnify this moment in pop culture and subculture, and make it feel like everyone could be a part of it,” says Williams.

Below, Williams and O’Connor walk through some of her most memorable hair colors.

“We were recording ‘Riot!,’ our second album, and we had the song ‘Misery Business.’ We were going to make a video and I wanted to look like an anime character. We had just gone to Japan and I got a magazine that I took to Brian. ‘Misery Business’ was the beginning of Brian and I's real, professional relationship,” says Williams.

“It’s basically the foundation of why the house could be built,” adds O’Connor.

“I don't think that we've ever made poor choices... except for the one time we went darker purple. When [Hayley] walks into a room, you don't just notice her. She notices everyone and she acknowledges everyone. And so it just did not fit her — not just in the skin tone sort of way — but just in how she, to me, presents herself. It was very much heavier and darker,” says O’Connor.

“It looked awful on me,” laughs Williams.

“I really think the half-and-half [hair color from “Still Into You] was a moment. It’s funny because at first I was very much like, ‘Are you sure you want to do this? In these two colors?’ But it just really worked,” says O’Connor.

“For Hayley, her whole career had been around this image of brightness — especially red or yellow with pinks — and it just was really cool to say, ‘No, we're not doing that. That's not where she is in her life right now.’ [Going blonde] was something to take back power for her,” O’Connor says.

“During the whole After Laughter [era], I think we really had fun because it was a blank canvas. We were able to use [Good Dye Young’s] Poser Paste in different ways, and were able to change the look without actually damaging the hair,” says O’Connor.