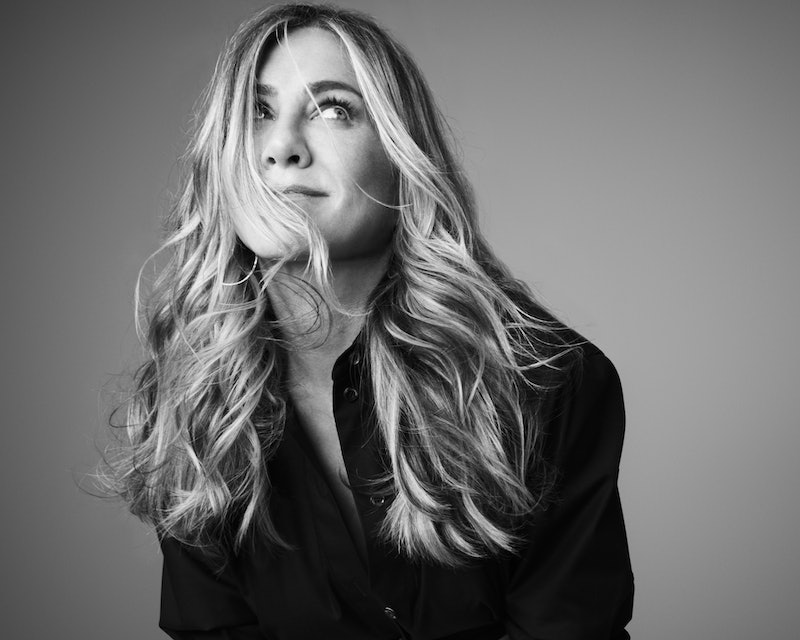 Jennifer Aniston’s acting career has spanned three decades, and during that time, she’s played too many iconic characters to count. Now, with the launch of haircare line LolaVie, the actor is stepping into a whole new role: beauty brand founder.

Aniston (and her hair) have been making a splash since the 1990s — but she’s never quite gotten the hype. While the “Rachel Haircut” that became her signature look on “Friends” had an undeniable impact on pop culture and massive influence on the era’s beauty trends, she tells Bustle that her hair has always been a “thorn” in her side. “It’s curly if I’m in humidity, with ringlets and frizz. Then, it’s different if I’m in dry weather,” she says. “It’s got five different personalities, so it’s really unpredictable. I’ve tried everything — from raw eggs, mayonnaise, and avocado to hair masks — to bring it back to life after I’ve beaten the crap out of it.”

Her reaction to her early aughts hairstyle becoming one of the most requested cuts of all time? “I giggle to myself. Oh my God, if you only knew,” she laughs. Though Aniston’s locks are often upheld as the epitome of effortlessness, she would like to remind you that that couldn’t be further from the case. “You can say it over the years, like, ‘Guys, this is not easy.’ Nothing falls off a tree looking like this. But it’s getting easier. [My hair and I] are making peace with each other.”

If the brand’s name sounds familiar, you might be recalling a fragrance that Aniston released back in 2010 under the same name. The origin is Lola, a nickname she lovingly earned in the 1990s when she moved to Los Angeles from New York. “I got my first used car and was very excited,” she says. “Afterward, someone said to me, ‘What are you going to name your car?’ I said, ‘Wait a minute. Is that something that you do in California?’ They said, ‘Yeah, duh...’

Aniston decided to call her new car the first name that came to her mind: Lola. “I just went with Lola. Whatever Lola wants, Lola gets,” she says. “I loved the song.” After that, the nickname stuck. “If I went over to a friend's house, they would always say, ‘Lola’s here!’” she adds. When it came to the line, Aniston says the name felt like like an apropos choice that’s synonymous with confidence, fearlessness, and empowerment.

With the beauty market becoming increasingly more saturated, Aniston is launching LolaVie with just one product — a multi-use “Swiss Army Knife in a product,” as Aniston calls the Glossing Detangler. Realizing how cluttered the shelves have become (“I personally get overwhelmed when a brand has a ton of products,” she says), the idea is for each item to address a specific gap in the market.

“A really nice detangler is really important for me because of all of the damage that’s been done to [my hair] over the years,” she says of the debut product. “The goal was to create a detangler that doesn’t just allow for easy access to comb through, but that also provides heat protection, vitamins and minerals, and a shine that doesn’t weigh it down. That was the first big mission.”

The formulation process was tricky. “It took trial and error and different samples and batches of ingredients. I would give it to my wonderful group of lab rat girlfriends with different types of hair and have them try it,” Aniston says. The lightweight spray can be used alone or incorporated into your current routine. “One of the hardest things was trying to get something that works for every single hair type. It’s just literally impossible, but I think we got as close as we could — and it was sure fun in the process.”

The LolaVie Glossing Detangler is available now on lolavie.com.