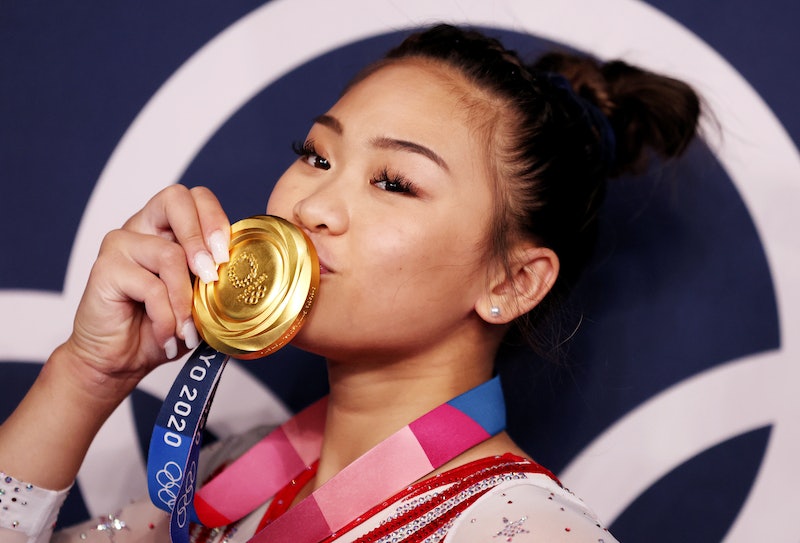 Gymnast Sunisa “Suni” Lee won the gold medal — and everyone’s hearts — for team USA on July 29 at the women’s individual all-around. Lee made history by becoming the first Hmong American to compete at the Olympics and the first Asian champion to win the coveted all-around medal. But leave it to Twitter to notice yet another impressive feat on Thursday: the 18-year-old did all of this while keeping her white, square-shaped acrylic nails intact. The all star athlete is also a fan of nail art and has been spotted with a set that had the cutest Olympic ring decals on the tips.

Acrylic nails are a great option if you want to extend the length of your nail and have the design and color last longer. As someone who has never gotten acrylics (the fear of poking my eye out when I take out my contacts is real, my friends), I am in awe of anyone who wears these gorgeous nails daily. But to compete at the highest level of gymnastics while wearing them? That’s just inspiring. The jumping, grabbing and spinning on the uneven bars. The handstands on a balance beam. The vault dismount. Seriously, how did she not break a single nail?

While the public waits for her nail secrets to be revealed, enjoy Twitter marveling at Lee’s amazing abilities from the Summer Olympics. Below are five of the best fan reactions to Suni Lee’s nails — including a hilarious shout-out from figure skater Adam Rippon.

Former Olympic figure skater Adam Rippon paid tribute to Suni winning gold (and her acrylic nails) by taping on white pieces of paper that spelled out her name on each nail. This is a hashtag everyone can stand behind.

Where is the lie? Twitter user @abbybatte follows up this tweet writing, “I truly can’t even take out my contacts with nails shorter than this. My hands become utterly useless.” I haven’t felt this seen in a while.

Honestly, same. The tweet was accompanied a “Queen!” GIF because that is obviously what Suni is.

Twitter user @renegadeapostle writes “Suni lee did all of that with long nails...” with another GIF that was perfect for the occasion.

If Lee can be this athletic with acrylics on, I can surely learn how to safely take out my contacts...right? Here’s to being about 90 percent convinced that my next look should involve acrylics.