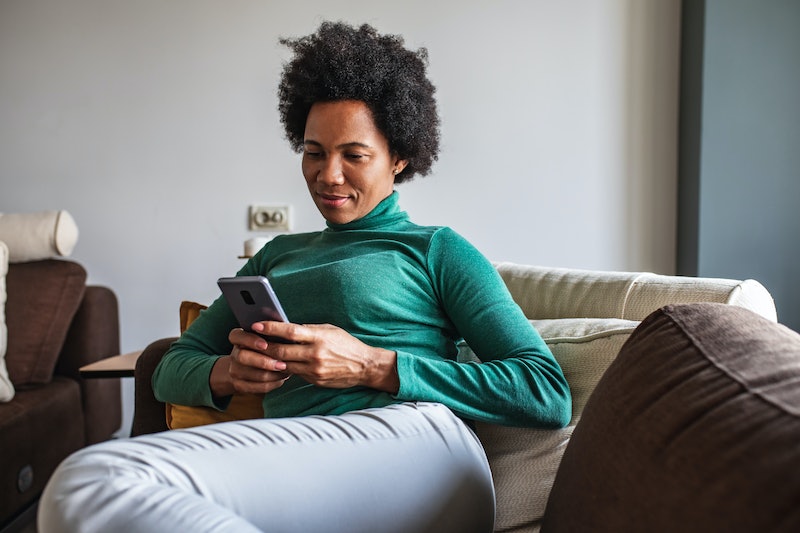 Starting a conversation with someone you’re interested in is nerve-racking, to say the least. There’s so much pressure to say the right thing, make a good impression, and get a conversation going — all in that first opening text.

It’s why it’s so tempting to simply dive right in with a quick “hey,” just to get it over with. But, according to relationship expert and matchmaker Tennesha Wood, that’s the last thing you want to do. “‘Hey’ is impersonal and shows little interest in the individual,” she says. “If a match has taken the time to share details about themselves, simply saying ‘hey’ is an indication that you probably haven't read their profile.”

Read more: 50 Example Sexting Ideas You Can Use Right Now

Boring messages — including “how’s it going” or “what’s up” — also make it seem like you’re reaching out to anybody and everybody, even if that isn’t the case. “Dating is about making a connection,” therapist Merissa Goolsarran, LCSW, tells Bustle, which is why it’s always better to take the time to send something a little more thoughtful.

Whether you ask an open-ended question, strike up a convo about a shared interest, or go big and ask them out on a date, here are a few cute ways to say hi in a text message or DM that are so much better than “hey.”

1. Point Out A Shared Interest

When figuring out what to say instead of hey, Goolsarran suggests looking for a “hook” — AKA something you have in common that’ll show the other person you might be a good match. It could be the fact you both have cats, the fact you both love to travel, or the fact you both posted a profile pic from the exact same restaurant.

That thing you have in common will be the bridge that ties you together, which in turn will make it easier (and more exciting) for them to write back. It will also make it clear that you took the time to read their dating profile, Wood says. They’ll feel good knowing you’re interested in who they are as a person.

To get a convo rolling, it also helps to ask open-ended questions. That way the other person won’t write back with a “yes,” “no,” or the dreaded, super-boring “cool” — all responses that drive a text exchange straight into the ground.

For example, you could say something like, “Hey there! Those are awesome pictures of the Grand Canyon. What was your favorite part of that trip?” As Goolsarran says, this type of question removes the gross “small talk” feeling, as it helps you jump right into a meatier discussion.

Another perk of the open-ended question? The other person will get to talk about themselves and share their experiences, Wood says, which is something pretty much everyone loves to do.

If you spot an intriguing opinion in their profile, ask for them to elaborate. “This will lead to a deeper conversation and help you understand your match’s views and where you are aligned,” Wood says.

It could be something important, like a political opinion, or something lighter, like their hot take on pizza toppings (though one could argue pizza toppings are important in their own way). Who knows? You might find yourselves debating late into the night.

If their profile gives you a good impression of their sense of humor, consider reaching out with a well-selected meme. Say something like, “For whatever reason this meme is hilarious and I think you might appreciate it.” As Wood says, “A touch of humor goes a long way when it comes to creating a fun conversation.”

When in doubt, talk about pets. An opening text, like “Your dog is beautiful! What's their name? Brutus the bulldog says hi. Well, he's snoring loudly but he would if he were awake,” will be tough to ignore, Claire AH, a matchmaker and dating coach, tells Bustle. It’s also undeniably fun.

“So many people post their pets. This is a gimme,” she says. “If you're a fellow pet lover, you already have a commonality. If you don't have a pet but you do love animals, you can say that, too.”

6. Ask What They’re Looking For On The App

To see if you're on the same page, ask what brought them to this particular app and/or what they’re looking for as far as dating goes, whether it’s something serious or just a casual hookup. This info will not only help guide the rest of your conversation in terms of flirting, but it’ll also start things off in an open and honest way.

7. Give A Simple Introduction

It may sound a bit advertise-y, but 27% of OkCupid users said they really like it when a match shares a bit about themselves in the first message. So why not go with a simple introduction? Say something interesting about yourself and then follow up with a question.

If you want to get keep things light and/or get a bit flirty, go for a message like this one: “I was just about to delete this app and then I saw you.”

“This cheeky text shows you have a life outside the app and also conveys you saw something special in this match,” dating coach Emily Freeman tells Bustle. “You would go so far as to not delete the app just to say hi to them.”

From there, you could even follow up with an offer to go on a date if the timing feels right. To continue the cheeky vibe, Freemen recommends saying, “I would love to go on a date with someone like you.”

“This is a flirty way to compliment someone without making assumptions,” she says. “It's bold and to the point. They will love it.”

Another cute way to reach out is by saying their first name followed by an exclamation point. Simple as that. “People love hearing their names. It makes them feel seen,” Freeman says. “When you put it in all caps and add an exclamation point, [and] maybe even an emoji, it makes it fun and quirky.” It also helps you avoid saying the wrong thing, which may be the way to go if you’re unsure how they feel and just want to break the ice.

In a sea of messages, saying something other than “hey” will really help you stand out. So spice things up with a text that’s a little more fun — and you’ll be going on a first date in no time.