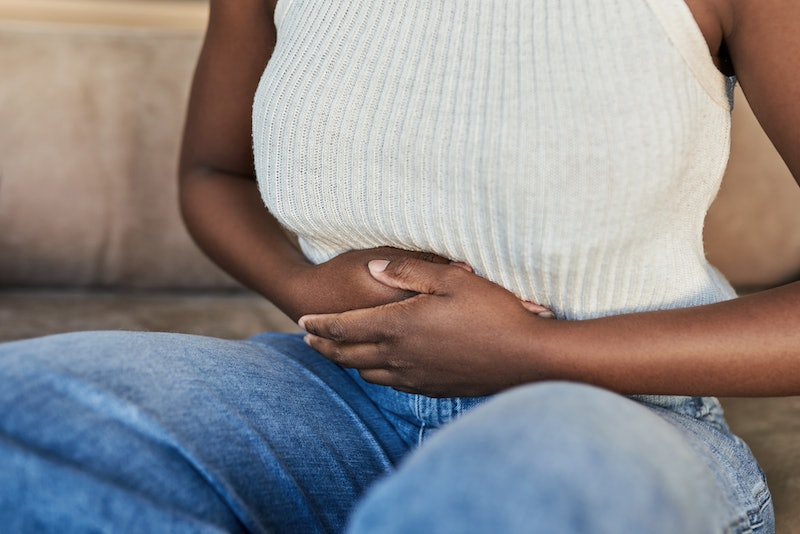 We at Bustle love giving you tips for how to tap into your sexual potential and troubleshoot when things aren’t going your way in the bedroom. But what about finding solutions to those stressful sexual health situations that inevitably crop up when you’re getting down? Emma Kaywin, a Brooklyn-based sexual health writer and activist, is here to calm your nerves and answer your questions. No gender, sexual orientation, or question is off limits, and all questions remain anonymous. This week’s topic: how to recognize the signs you might be pregnant.

Q: I had sex a couple weeks ago and the condom broke. We only figured it out after. When I talked to my friends about it a few days later, they told me I should have taken the morning after pill, but that now it's too late. Now my body is feeling all weird, and I'm totally stressed I might be pregnant ... but maybe I'm just being paranoid. Is there a way to know without going to the doctor? Are there, like, symptoms of early pregnancy you can detect before a missed period? I know I should go to the gyno to take the test but I'm so nervous and I really don't want to have to explain all this.

A: No method of birth control is 100% effective, a fact anyone who has had a condom slip or break or who has otherwise experienced a pregnancy scare can tell you all about. Not all broken condoms result in pregnancy, but if you are a human with female reproductive organs, you are having sex with someone who has male reproductive organs, and you are fertile, you could end up pregnant.

To know whether or not you're pregnant for sure, you need to get tested. There are a bunch of home pregnancy tests on the market that you can buy at any drugstore or online and bring back to the privacy of your home to self-administer. These tests are looking for a specific hormone called human chorionic gonadotropin (hCG), which your body produces right after your fertilized egg implants in your uterus, and which can be found in your urine.

The good news is that these pregnancy tests are about 99% accurate, with many home tests claiming that they can discover a pregnancy even before you miss your period. This makes sense, because your body will have hCG in its system from the first day of pregnancy, and that’s what the test is looking for. However, to get a really accurate result, it’s a good idea to wait a couple days after your period was supposed to come. That’s because while the hCG starts being produced on day one of conception, it ramps up exponentially. This means that the longer you wait (within reason of course!) the more likely it is that you’ll get an accurate reading.

You can also go to your doctor to get a blood test, which tests for hCG. This can detect if you’re pregnant around six to eight days after ovulation, but you have to wait to get your results, which can be stressful! Also, just so you know what to expect, your doctor may test you again even after you’ve done an at-home pregnancy test, just to confirm for their files that you are indeed pregnant.

All that said, there are some signs that our body send us on its own that let us know we might be pregnant. Everyone is different, and a lot of these early signs can be very similar to what we feel around the time we get our period, so don't freak out if this sounds like you — and remember — the only way to know for sure is to take a pregnancy test.

Lots of humans with uteruses deal with cramps on a regular, if not monthly basis. So having cramps on their own probably isn’t going to make your mind go straight to pregnancy worry. However, cramps can signal that your uterus is making room for its new occupant, so if you're feeling some cramping, especially when you usually wouldn't, it could be a sign that you're pregnant.

Spotting between periods is not that unusual for many folks with periods. But spotting can also occur as a result of what’s called implantation bleeding, which is when your fertilized egg actually attaches to your uterine wall. This happens six to 12 days after conception and can be a sign of pregnancy. It can also, of course, be a sign of lots of other things too. For example, you could be spotting because you're stressed, recently missed birth control pills, switched birth control pills, or got an IUD, among other reasons.

3. You Have Milky-White Discharge

Vaginal discharge is another totally normal thing for humans with vaginas to experience, and it's definitely not always a sign that you're pregnant. White discharge can be an early pregnancy sign, indicating that your vagina’s walls are thickening in preparation. White discharge before your period is not always a sign of pregnancy, and is considered normal at any stage of your cycle, so long as it is not accompanied by foul smell, itch, or irritation.

Yeah, so, you probably knew this one. When you’re pregnant, your menstrual cycle shifts as your body maintains its thickened uterine lining to feed your fetus. So it stands to reason that if you miss your period, you could be pregnant. However, there are many other reasons why your period could be late or you could skip a round — including stress. And if you are stressed that you might be pregnant when you don’t want to be, you could end up giving yourself this symptom in a cruel feedback loop.

5. You Have Swollen Or Tender Breasts

Right after you become pregnant, your hormone levels change super fast. These hormones can cause your breasts to get swollen, tender, sore, or feel tingly — and all of this can happen as early as one week after conception. Your areola might change color and become darker, too. Breast soreness is also a symptom of getting your period for many people, but if it’s persistent and comes with some of these other symptoms, it could be a sign that you're pregnant.

6. You're More Tired Than Usual

Feeling super sleepy all of a sudden? Higher levels of the hormone progesterone as a result of conception could be the culprit, as could lower blood sugar and blood pressure, or higher levels of blood production — all of which occur in the first trimester. "One of the things that most people don't realize is fatigue," Dr. Mary Jane Minkin, a clinical professor in the Department of Obstetrics, Gynecology, and Reproductive Sciences at the Yale University School of Medicine, tells Bustle. "Women get very tired oftentimes in the first three months of pregnancy and that can start fairly early."

As the Cleveland Clinic notes on its website, changes in blood volume and hormone levels don't just make you fatigued — they can also make you feel dizzy and lightheaded. This is why some pregnant people report feeling faint or even experiencing more headaches.

You’ve probably heard about this one, because it’s also called morning sickness (although it can happen at any time of day). This particular nausea is triggered by your hormones and can start early in a pregnancy, according to Dr. Minkin. Luckily, morning sickness usually reaches its peak in the 8th or 10th week of pregnancy and fades at around the 13th or 14th week, and not everyone gets it at all. But if you’re suddenly feeling like you’re on a rollercoaster all the time, it could be a sign that you’re pregnant.

According to the University of Rochester Medical Center, over half of pregnant people report experiencing back pain at some point in their pregnancy, and it tends to get worse as the due date nears. According to the medical center, the ligaments and joints in your pelvic region actually loosen when you're pregnant. On top of that, the added weight pregnant people carry can throw off their center of gravity and lead to further discomfort and risk of injury.

10. Your Tastes Are Suddenly Changing

These cravings and aversions could be related to your new pregnancy hormone levels and can make you obsess over getting a certain food, or suddenly want to vomit when you think about something you usually eat. However, a 2017 study published in Chemical Senses suggests more research needs to be done into whether or not progesterone and estrogen are the only factors related to potential changes in taste during pregnancy.

11. You've Been Experiencing Shortness Of Breath

If you notice yourself having a bit more trouble breathing than usual, it could be a sign that you’re, um, breathing for two now. As pregnancy progresses, this could get a bit worse — that’s because as the fetus gets larger in your uterus, there’s less room for the breathing organs in your body (lungs and diaphragm). Additionally, according to Harvard Medical School, increases in the hormone progesterone can make you breathe more rapidly if you're pregnant.

12. You're Having Mood Swings

If you notice that your mood is swinging all over the place, you could of course have PMS, but you could also be pregnant. Hormones dictate mood super strongly, and the rush of hormonal changes happening in your body if you’re pregnant can cause you to have extreme peaks and troughs when it comes to emotions.

This laundry list of symptoms is helpful, but almost all of them can be caused by things other than pregnancy. If you want to know for sure, Dr. Minkin suggests you either wait a few days to see if your period comes or take a pregnancy test. "Some of the home pregnancy tests kits are amazingly sensitive these days," she says, noting how far they've come in the past several decades. " ... The First Response home pregnancy test kit is so sensitive that it will actually tell you you're pregnant six days before the first day of your missed menstrual period." Without such tests, it can be really confusing to tell whether typical pre-period symptoms like spotting or breast tenderness could actually be signs that you're pregnant.

Pregnancy is a double edged sword — some people are ecstatic when they find out they are pregnant, because they really want a baby. For others, testing positive is just the opposite. If you don't want to have a baby (whether right now or ever) learning you are pregnant or even thinking you might be pregnant can be totally overwhelming and stressful, to say the least.

If you're in this second category, know that there are options out there for you. Abortion is an extremely low-risk, safe procedure that won't impact your ability to have babies in the future. Whatever you choose, remember that it is your choice to make.

Dr. Mary Jane Minkin, M.D., a clinical professor in the Department of Obstetrics, Gynecology, and Reproductive Sciences at the Yale University School of Medicine

This article was originally published on June 6, 2016