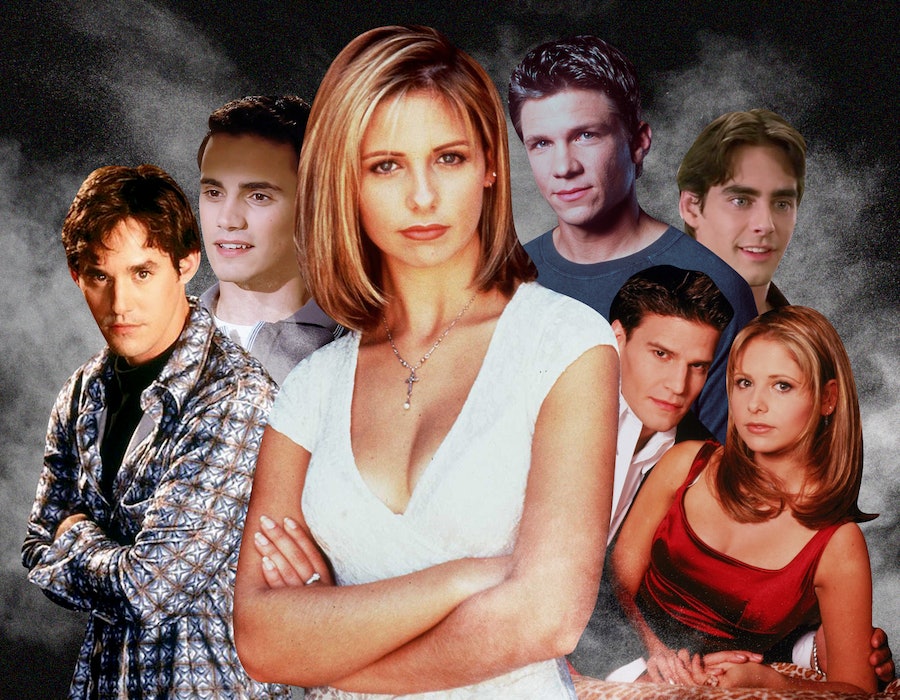 Into every generation a slayer is born: one girl in all the world, a chosen one. She alone will wield the strength and skill to fight the vampires, demons, and the forces of darkness; to stop the spread of their evil and the swell of their number. She is the Slayer, but you may know her as Buffy Summers. She also has the romantic taste of a tube worm on fire, just swimming into random spermatozoa and saying, “This will do. I’m on fire.”

For seven seasons, Buffy saved the world (a lot) and was rewarded with death, destruction, and relationships so toxic that marine oil drilling companies could look at them and say “Wow, impressive.” Her healthiest partnership was with a dead man who tried to kill her a bunch, and the fact that this qualifier actually describes not one but two different suitors should indicate where the rest of this sordid tale takes us.

In a series that follows this superhuman force of nature, the strongest mortal being in existence with an unflinching desire to do what’s right, even at the cost of her health, her happiness, and sometimes her life, her weaknesses are what make her relatable. And in no aspect is she weaker (or more relatable) than in her taste in men.

To exist as a person who enjoys the male gender is to have experienced myriad heartaches, humiliations, and vast mediocrity. This is not to say “all men,” for, you see, #NotAllMen, but certainly the experiences are universal enough as to be part of the female canon for a large number of us. Particularly in our teens and 20s (and again in our post-divorce 30s), relationships can be damaging in a way that shapes us for the rest of our lives. To some extent, this seems to be by design, an evolutionary method of selecting an adequate mate by first selecting awful ones.

But in the television pantheon of iconic relationships, most characters get at least one healthy, happy love story. Zack had Kelly, Veronica had Logan, Desmond had Penny, Rachel had Ross (your mileage may vary on that one but at least he never tried to murder her). Where was Buffy’s great love story?

When we first meet our hero, she’s falling head over stake for Angel, a vampire with a penchant for black tanks and Dep shaping hair gel for active lifestyles. He’s older, brooding, and emotionally unavailable. Be still her beating leather pants. This relationship would set a course for the rest of her teens and early 20s, establishing such a low bar that a powerful ship war continues to this day pitting Angel against Spike, her literal attempted rapist.

While Buffy never returned the romantic favor, Xander Harris spent the first season pining hard after our Slayer. There is an argument to be made that in some regard, Buffy is punished for her lack of attraction to Xander, he the once and future King of “Nice Guys.” Xander, a widely understood Joss Whedon insert, falls in love with Buffy at first sight, to the devastation of his best friend Willow. Xander fully establishes his position as Worst Man in a Series Filled with Worst Men when he, out of jealousy and a misguided sense of “protection” for this woman who could literally crush his skull if she wanted to (we’d love to see it), lies to Buffy, ultimately setting her up to murder her beloved Angel.

Parker Abrams represents a near-universal experience for womankind, someone who takes the “eats, shoots, and leaves” approach to sex and love, who lures us in, makes us vulnerable, only to eventually pull out the proverbial rug. Buffy slept with Parker, then he ghosted her, and she fixated on it for weeks after, until she got drunk and punched him. But as viewers, we were all the irritated friends who couldn’t fathom why so much emotional labor was being spent on this floppy-haired nuisance.

That said, we’ve all wasted emotional labor on floppy-haired nuisances, boring bros, and problematic vampires (energy vampires, presumably not literal ones, but I don’t know your lives). Maybe we aren’t superhumanly strong slayers fighting demons, but we’ve certainly fought our share of f*ckbois. That’s what makes Buffy Summers so tremendously relatable. She traversed the toxic sludge of crappy dudes, and so have we.

Buffy deserved better. And it reminds us that we all do.

Choose the love you wish Buffy Summers could have had. And if the relationship apocalypse comes, beep me.