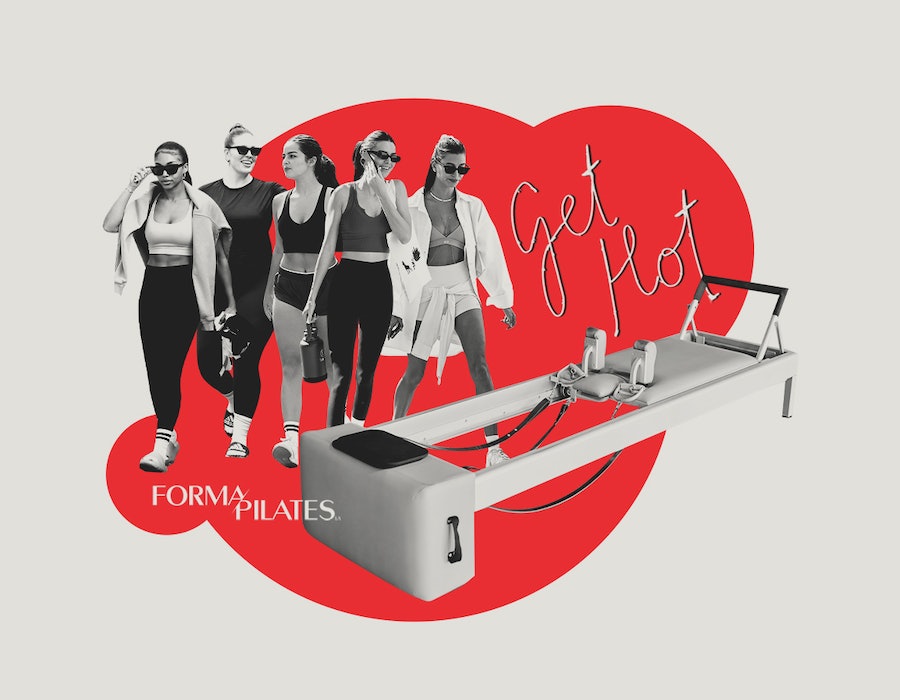 Remember Pilates, the hundred-year-old workout that was declared out of style back in 2015? Well, it’s not your imagination if you’ve been seeing a resurgence of the fitness modality: It’s back. Just ask Hailey Bieber, Kendall Jenner, Bella Hadid, or just about any other A-lister.

Pilates, as you may recall, is a low-impact, full-body workout that channels the mind-body connection to achieve precise, controlled movements that promote alignment, balance, and strength. It can be performed with little to no equipment and/or a Pilates reformer, aka its signature sliding padded bench with springs, ropes, and pulleys that create tension and resistance.

So when did Pilates become popular again? For reference, in 2016, 5.5 million people in the U.S. were practicing Pilates, according to a survey conducted by National Sporting Goods Association. And while numbers took a nosedive down to 5.1 million in 2020, presumably due to studio closures related to the pandemic, that number bounced back to 5.8 million in 2021. After a nearly 14% year-over-year increase, one can only guess what participation rates are like in 2022, especially with the recent influx of celebrity stans. Read on for more intel on how Pilates became the it-workout of our times.

You can’t beat the transformative strength that you get from doing Pilates on the reg. “No crunch is going to give you such strong stomach muscles,” says Los Angeles-based celebrity Pilates instructor Nonna Gleyzer of Body by Nonna, who has taught A-list clients like Beyoncé, Gisele Bundchen, Madonna, Kerry Washington, and many more since she got her Pilates certification in 1996.

Studies comparing resistance training to Pilates have even shown that the latter modality is more effective in improving core stability, strength in surrounding muscle groups, and increasing overall mobility, all while being gentle on the joints.

“No crunch is going to give you such strong stomach muscles.”

With Pilates’ benefits in mind, Gleyzer has derived her own theory as to why the modality is currently trending hard: Working from home caused everyone to develop the back and neck issues that typically bring many people to Pilates, she speculates.

WFH aches and pains aside, it’s possible that those who so embraced hardcore circuit training and heavy lifting were simply ready to work out in new ways — particularly, those that were easier on the body. Remember: Before workout studios closed because of COVID, the rise of higher-intensity boutique fitness studios — think SoulCycle, Orangetheory, CrossFit, and Barry’s — nearly put Pilates out of business, according to reports of its demise. One could reason that during lockdowns, without a Barry’s treadmill or CrossFit weight tower available, die-hards were left to their own devices and had a good long chance to rethink how these workouts were making them feel.

Though Google Trends data from 2020 reveals a dip in all fitness modalities, industry data from global insights platform Research Dive reveals that Pilates will experience notable growth at a compound annual growth rate of 10% between 2021 and 2028 — and suggests it’s largely due to the workout’s benefits to both physical and mental health. “You start hurting [from doing such hardcore workouts], and Pilates becomes appealing since it’s the most body-friendly, anatomically-correct type of workout that targets and elongates every single group of muscles,” says Gleyzer. “It’s what you do to feel better.”

That goes for the body and mind, since Pilates just so happens to be an excellent stress reliever, too. “You can’t do Pilates without a strong mind-body connection, so it’s a good way to get a physical workout and an emotional escape,” Gleyzer points out. And who hasn’t needed that kind of outlet?

To be clear: “Celebrities have been doing Pilates forever,” says ​​certified instructor Marlana Lacivita at Club Pilates, an international Pilates chain. After all, many celebrities prefer to train privately, and since Pilates movements require the utmost precision and close supervision, private sessions have always been ideal for achieving results, Lacivita explains.

The more recent uptick in A-listers doing Pilates can be traced to 2021 when celebrities began creeping out of their homes (and pajamas), newly armed with vaccines after spending most of 2020 stuck indoors without access to fitness studios. Of course, by that time, gyms were reopening alongside smaller studios, but one-on-one, her clients felt safer than they would in social settings where everyone is breathing heavily, Gleyzer speculates. And with socially-distanced mats and reformers, it’s possible that everyone felt a little safer in Pilates studios than in big-box gyms or congested group fitness settings.

More recently, Lori Harvey and Normani showed up to the 2022 Met Gala wearing cut-out dresses that framed their famously toned abs and credited Pilates during red carpet interviews. Afterwards, Lacivita saw a direct boost in traffic to her Brooklyn studio. “Even two months later, we are still hearing people say that they came to the studio to try Pilates because they heard that Lori Harvey does it,” she says of the halo effect.

The Democratization Of Pilates

Regardless of what’s drawn the masses to Pilates as of late, there’s no question that the boom in digital fitness gave Pilates studios the opportunity to reach a broader client base, democratizing it in a way. Many Pilates studios and trainers used their studio closures to get with the times and position themselves to reach more students than ever, since virtual workouts (for the most part) don’t have a max capacity. And because it’s cheaper to stream classes than pay studio overheads, it actually made Pilates more affordable. Case in point: Even Forma Pilates, which typically requires a personal referral and charges $75 per class, began offering digital workouts to the masses for $49.99 per month or $480 per year, no referral required.

Now that studios are reopened, Pilates classes are more accessible than ever — and, some would argue, now have even greater appeal. After months and months of working out at home with minimal equipment, reformer Pilates brings a different element than people are used to, Lacivita points out. “This keeps their workouts fresh, exciting, and challenging,” she says. At the same time, those who continue to prefer to work out at home or simply can’t afford to splurge on pricier fitness classes can still tune in remotely.

There’s no question about it: Pilates is back in vogue. And yet: “It’s been around for so long,” Gleyzer says, “that I wouldn’t call it a trend.”