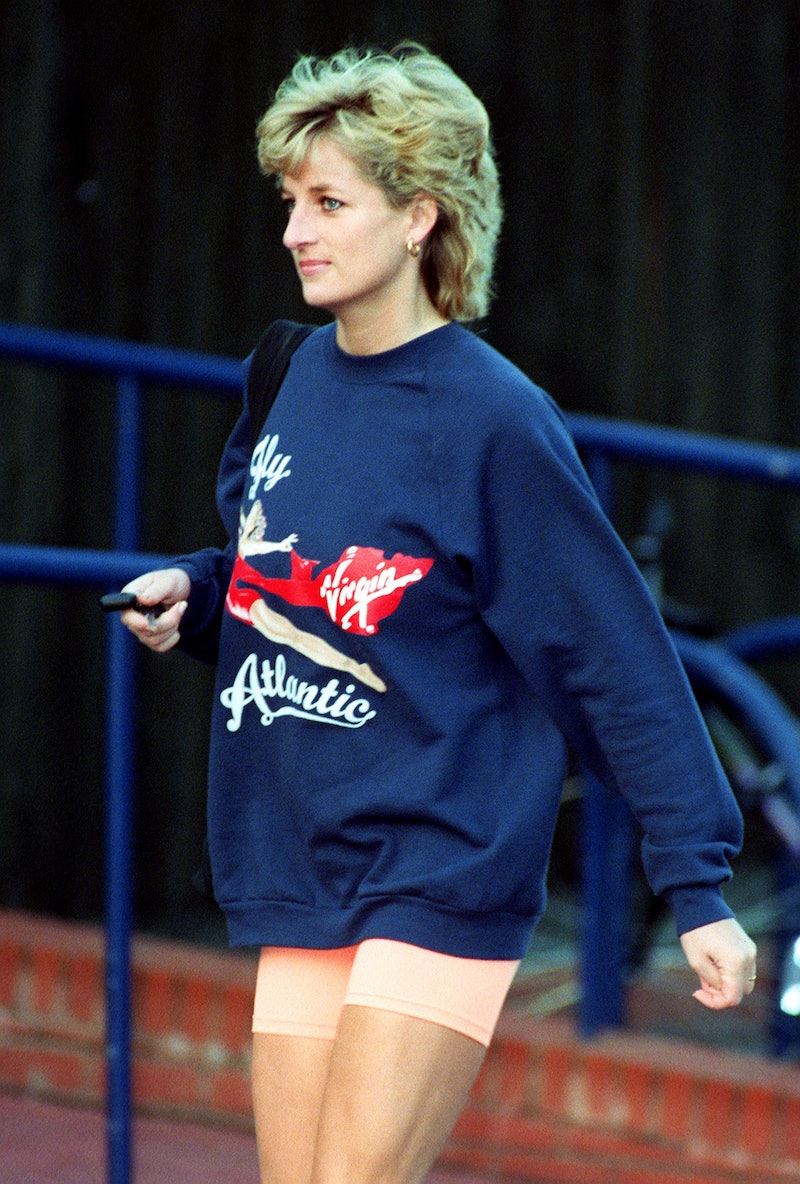 If you slipped on a pair of rollerblades during lockdown, you knew you were channeling the ‘90s. But you were also bringing back one of Princess Diana’s favorite exercises — because yes, the people’s princess loved to blade. Princess Diana’s workout routine helped her keep up with the endless array of social causes she championed, which is just one of many reasons her sweat sessions remain an object of fascination and inspiration.

The athleisure that people associate so much with the princess — think, that Virgin Atlantic sweatshirt — was actually a plea for the press to pay more attention to real issues and less attention to Diana’s training. “She always wore the same sweatshirt when we met to work out,” her personal trainer, Jenni Rivett, told The Mirror in 2019. “She was tired of the media speculating about her clothes when there were more important things happening in the world.”

But when Rivett auctioned off the sweatshirt for charity in 2019 for over £42,000 (nearly $60,000) — “The princess would definitely approve if she were still alive,” she said — stories about Diana’s workouts started emerging with it. And along with being influenced by her activewear, people have also gotten inspiration from her workouts themselves.

What Was Princess Diana’s Workout Routine?

What exactly did Diana incorporate into her workouts? A lot of variety, Rivett told New Idea Royals Monthly in Jan 2021. Diana went swimming in the mornings, Rivett said. When she couldn’t because she was spending time with her sons, Princes William and Harry, she would find at least a few minutes to incorporate some stretching before breakfast.

For strength training, Rivett said that Diana focused on “functional training using her own body resistance, medium-sized weights, and resistance bands.” Tossed in for good measure were a load of squats and lunges, because apparently Diana had excellent form. The lesson there? Capitalize on what you’re good at.

But you also want to focus on what you like, and Rivett said that Diana had a lot of fun learning to rollerblade and power walking or jogging through Kensington Gardens. “Diana used to like doing step aerobics, which was the big thing in the ’90s,” Rivett said.

It feel like six hundred years since the ‘90s, but the princess’ workout routine checks out by 2021 standards. “Starting slow with morning movement to increase blood flow and helping the body wake up is the key,” says Kelsey Decker, a National Strength and Conditioning Association-certified personal trainer and the education coordinator for StretchLab.

Bodyweight training is also an effective way to get stronger, says Tiffany Ayuda, an American Council on Exercise-certified personal trainer at Blink Fitness. “Bodyweight exercises teach basic functional movements that translate into real life, such as squatting down and standing up back from sitting in a chair, pushing doors open and moving heavy furniture, and walking up and down stairs,” Ayuda explains. Resistance bands up the ante even more. “Resistance bands force your muscles to work under tension throughout the entire movement, which translates to greater strength and muscle gains,” Ayuda says.

Even Princess Diana’s “trendy” workouts like rollerblading and step aerobics gave great workouts, Ayuda says. “Step aerobics workouts are great for getting your heart rate up and building strength,” she tells Bustle. “It can also be fun and not feel like a workout for some people,” which makes you more likely to stick with it. And rollerblading works out your heart, core, and entire lower body, certified personal trainer Amy Fanella previously told Bustle — not to mention shaking any boredom out of your exercise routine.

Want to stretch like Princess Diana but don’t have much time? “I recommend doing the world’s greatest stretch,” Ayuda says, “which incorporates the inchworm, plank, and low lunge with rotation, because it activates all of the muscles in the body.” A handful of reps will only take a few minutes before you grab breakfast.

Don’t have access to a royal pool? Ayuda says you don’t need water to mimic the full-body benefits of swimming. “Doing bodyweight exercises, such as supermans and swimmers (the actual exercise), target your back and core muscles,” she says. “You can also do bird-dogs, leg raises, and flutter kicks to strengthen your core and improve your arm and leg coordination, which is essential for swimming.”

As for Princess Diana’s love of step aerobics, Ayuda says it’s largely about what you find fun. But you don’t need fancy equipment to get the benefits. “If you don’t have an exercise step at home, you can simply do the exercises with just your body weight, or do some of the exercises with a step from a set of stairs outside,” she explains. Incorporate bodyweight strength training — like Princess Diana did — to give yourself that extra boost of overall princess-like strength.