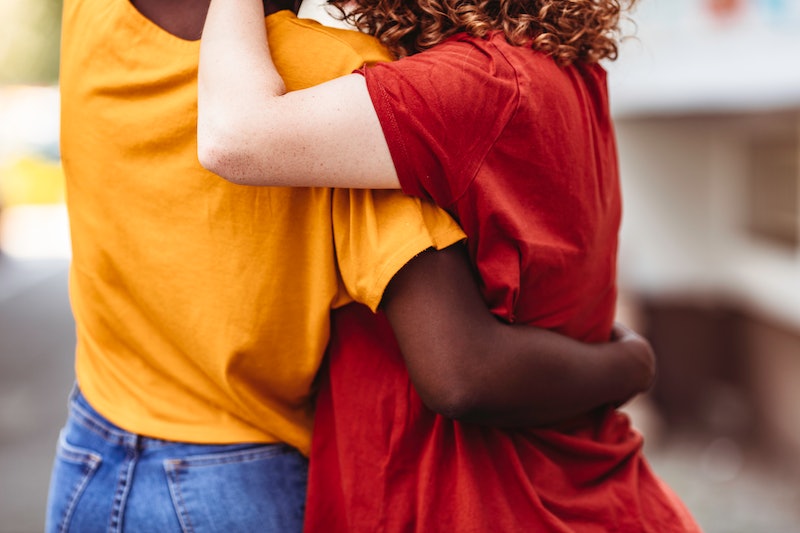 Manipulation, subtle or outright, occurs all the time. It can happen when you buy a car, when you fight with your partner, or when your demanding boss asks you to take on another task at work. That's why it's so important to be able to spot the signs someone is manipulating you, as it can ultimately save you some drama and stress.

Psychological manipulation — which occurs when a person is exploiting a victim to serve their own agenda — can be a sign of an emotionally abusive relationship. This can be a lot more difficult to spot than a physically abusive one. “To understand manipulation, we have to explore the difference between negotiation and manipulation,” Nicole Richardson, LPC-S, LMFT-S, a licensed marriage and family therapist, tells Bustle. “In negotiation, there is a give and take, where with manipulation it is typically one person's needs or agenda prioritized over that of the other person.” It can be tough to recognize signs of manipulation, particularly when you’re unsure about your own wants and needs in a given situation.

Being the victim of manipulation doesn't feel good, whether it's by a friend, family member, or partner. So, to help prevent it and get the support you need, keep an eye out for these signs of a manipulative person.

1. They Guilt Trip You

Since manipulation is all about being powerful, a manipulative person will do anything they can to keep you feeling confused and weak. Oftentimes, they do this by scrambling your brain with weird apologies and guilt. “Someone who is seeking to put their agenda over your needs, will want you to feel guilty about disappointing them,” Richardson explains. “They may twist your words around or assign negative characteristics to you in order to make you feel guilty for setting a boundary.” Since it gets messy, the manipulator often comes out on top of the argument — right where they want to be.

“This is an example of gaslighting, a behavior that gets the recipient to doubt themselves and question their reality,” Anita Chlipala, a licensed marriage and family therapist, tells Bustle. “Blaming you, making you feel bad, and getting you to wonder what really did happen allows the manipulator to control the narrative.” Gaslighting is considered a form of verbal abuse.

2. They Ignore Your Input

In order to get their way, a manipulative person may sneakily — and conveniently — assume you agree with everything they say. “We all can project our assumptions onto people and situations, that's human,” notes Richardson. However, “someone who is seeking to manipulate you will try to confuse you and tell you that you did say or do something to validate their point of view,” she says, explaining that a person who is not trying to manipulate you will be willing to listen to you when you say you disagree.

Chlipala adds that manipulators will often get what they want by exploiting your memory. They might say, for example, “You don’t remember this conversation? You always did have a bad memory.” She explains, “By pretending that an agreement or decision was made, a manipulator gets their way without a conversation and without having to compromise.”

3. They Don't Give You Time To Make Decisions

Unless you are in the middle of a heist or other time-sensitive situation, there is usually time to think things through before making a big decision. Be wary of people who pressure you for an answer, especially if money is involved. “Outside of situations that are life-threatening, you should be able to sleep on a decision or even have a day or two to do your own due diligence [and] thinking,” explains Richardson. “It is a very common sales tactic to put deadlines on decisions to get you to act.”

By putting the pressure on you, the potential manipulator is hoping you’ll crack and bend to their will. But Richardson also points out that many of us would put off decisions indefinitely if we could. “We have to remember that we don't have forever to make a decision, but a day or two shouldn't ruin your chances at things.” What matters most is that you feel respected to make a decision within the allotted time.

Unresolved arguments are common in an unhealthy relationship, mostly because they are pretty convenient for whoever is getting their way (i.e. the manipulator). While chronic problems can happen in healthy relationships too, “manipulation comes into play when each partner's needs and point of view are not valued as equally as the other's,” says Richardson.

In a healthy relationship, both partners will listen to each other and be willing to compromise. A manipulator will have a “my way or the highway” attitude about it, as Chlipala puts it. “It’s common to then just give up what you want because you don’t want the fight or the headache of dealing with a person who won’t listen to you and what you need,” she adds.

5. They Undermine Your Self-Confidence

This form of manipulation is classic, because no one is more malleable than someone with zero confidence. That's why manipulators will do whatever they can to knock you down and make you feel less-than. “We see this with negging,” says Richardson, the practice of giving backhanded compliments to increase the other person’s need for approval.

“When someone wants you to prove your value to them, run,” Richardson advises. “If someone doesn't see you as an equal who is deserving of their value and respect, then they do not deserve your value and respect. If someone feels as though they have to make you feel less-than in order to gain power over you, they will try to control and manipulate you.” If this person really cares for you, their interest will be in lifting you up, not knocking you down.

6. They Force You Out Of Your Comfort Zone

Again, manipulators want to retain the upper hand. Doing so is always easier if they can get you somewhere uncomfortable — aka out of your comfort zone — either physically, emotionally, or financially. Someone who loves you does want to support you in trying new things and challenging yourself, but “the difference between that person and a manipulator is the loving person wants to encourage and inspire you,” Richardson says. “The manipulator suggests you have character flaws if you don't want to or can't do the things they think you should be doing.” For instance, if this person is pressuring you to try an activity that feels unsafe, then telling you you are “boring” for not wanting to do so, that’s a form of manipulation.

7. They Butter You Up With Small Requests

Manipulators also often ask for reasonable favors, only to follow up soon after with their real requests. The idea here is to get you saying "yes" so you'll have a harder time going back on your promise. “We see this in sales as well,” notes Richardson. “Just like with consent, you can say 'yes' to something and change your mind. If you start down a path and you no longer wish to go in that direction, a manipulator will want to force you to do what they want and not necessarily what's in your best interest.”

If you object to their increasing requests, manipulators will often turn the tables on you so that they’re the injured party. Once it's all about them and their complainants, you'll be on the defensive, putting them in the dominant position.

8. They Offer The Silent Treatment

If you've ever been given the silent treatment, you know how manipulative it can be. “There is value in taking breaks from tense [or] difficult conversations,” explains Richardson. “Someone who is not trying to punish or manipulate you can tell that they want to finish the conversation, but they are too upset to engage rationally right now. Someone who wants to manipulate you will make you feel as though you are being punished and you deserve to be punished.” Then they use their silence as a form of leverage. Since the other person has firmly planted themselves in a place of power, it's normal to feel you have no choice but to end the madness by giving in to them.

9. They Pretend To Be Concerned

This one can be especially alarming because it involves fake feelings. The manipulator will display some fake concern for your well-being, all in an effort to undermine your decisions and confidence. “They butter you up,” says Chlipala. “They suddenly take interest in your life, make time for you, [and] act concerned, when really it’s all a ploy to get what they want out of you.” If a friend or relative is suddenly unduly concerned about you, this could be what they're up to.

10. They Intentionally Disregard You

They may act as if they don't understand your request, thus letting themselves off the hook. Or they may pretend not to understand as a way of shaking your confidence. “There are people who 'play dumb' in order to avoid responsibility for things,” says Richardson. “If someone was legitimately confused and you point it out to them, they will course-correct and everyone can move [along]. If they want to manipulate you, they will give you excuses about how they just couldn't possibly follow the rules or expectations, so there should be an exception for them.”

In the same vein as willful ignorance, people sometimes go the passive-aggressive route to get out of things or to get their way. For instance, a partner may conveniently forget to pick up your dry cleaning as a way of making you mad. “This one is tricky because of course people do forget things,” Richardson tells Bustle. “When it's an honest mistake, the person will express sincere remorse for it, [but] when they are trying to manipulate they will have endless excuses for why they couldn't possibly have been able to complete the task.”

12. They Withhold Things From You

Someone who is manipulating you will try to create an incentive for you to do their bidding. “Whether it’s affection, sex, [or] money,” Chlipala says, “withholding something from you that is important is a coercive tactic so they get what they want first.” This is also a power-play move, because by withholding something you need or want, they make you feel like you have to change your behavior to have a chance at getting that thing.

A manipulator will “keep asking and pestering until you’re so annoyed and want that behavior to stop, that you finally cave,” Chliapla explains. “Maybe they want to buy an expensive item or try a new sexual position. After initial resistance from you, they keep bringing it up and asking until you finally agree, thus causing you to violate your own boundaries.”

No form of manipulation is healthy, but keep in mind that it's not always done consciously. Some manipulative people have no idea what they're doing, while others are very aware. That's why it's helpful to recognize the signs of manipulation (and get help if you need it) so you don't get used, duped, or taken advantage of.

This article was originally published on May 24, 2016