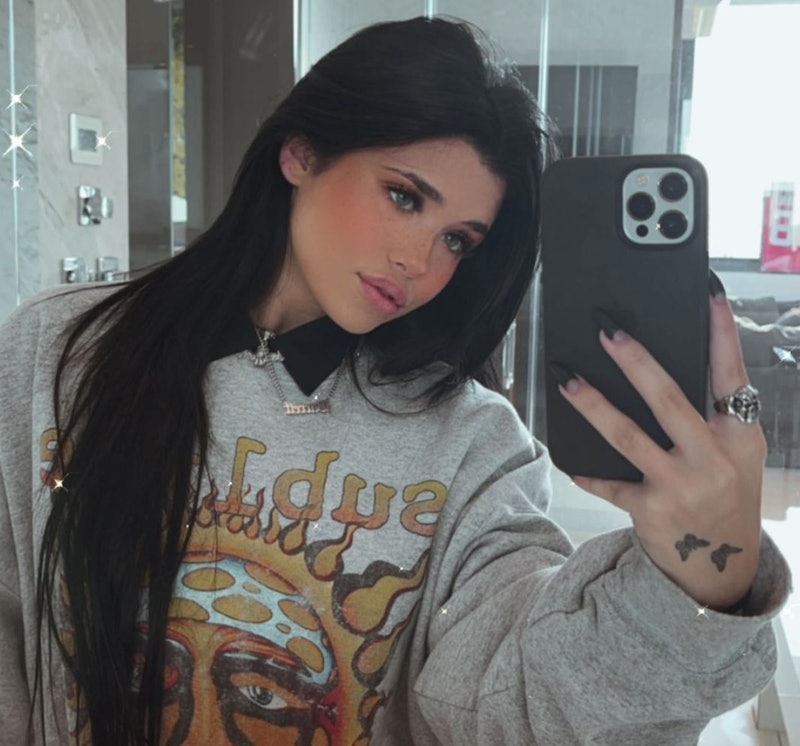 The Neighbourhood's "Sweater Weather," a super catchy track that came out in 2013, is now making a comeback on TikTok — as the app's certified bisexual anthem. Influencers like Nessa Barrett, Anna Shumate, and James Wright are even using "Sweater Weather" to come out as bi on TikTok, to the applause of their massive followings.

But they're definitely not the only ones. According to Unpublished Magazine, an online zine for emerging writers, other users have been posting the lyrics in comments sections, or sharing videos of themselves singing the lyrics, to identify as part of the bisexual community. The same thing is happening with the girl in red song "girls," which has been dubbed by fans as an official lesbian anthem.

Both songs are widely used as a code. A video or a comment including the lyrics or a hashtag (like #girlinred) can be seen as a cheeky wink to fellow bisexuals and lesbians — or as a coming-out message. Girl in red singer Marie Ulven writes about being queer, penning songs like "I Wanna Be Your Girlfriend." But since none of the five members of The Neighborhood are openly queer, and their songs aren't explicitly about being bi, you might be wondering — of all the songs in the world, why is "Sweater Weather" TikTok's bi anthem?

Per Unpublished Magazine, "Sweater Weather" likely became associated with bi identity due to its popularity on Tumblr, the platform where so many young people who are questioning their identity go to discover new music from queer artists, like Halsey, Troye Sivan, or Hayley Kiyoko. Now the song is associated, in a nostalgic way, with that sense of self-discovery.

Diving deeper into "Sweater Weather," you'll notice that the lyrics in the TikTok sound clips aren't necessarily about a woman and a man falling in love. "One love, two mouths. One love, one house. No shirt, no blouse. Just us, you find out." The beauty of these lines is that they can be for, or about, anyone. Perhaps that's why they resonate with people identifying as bi.

Of course, sharing "Sweater Weather" lyrics may not be a viable or safe option for everyone. Not to mention, coming out is a process — and one that's rarely as simple as posting a single video on TikTok. "LGBTQ+ people have to first identify themselves privately in a world that continues to tell them that people like them are not welcome," Nate Warden, the founder of Coming Out, an open source platform for sharing stories about coming out, previously told Bustle. "And then eventually [they] try to work up the courage to announce themselves."

That said, bisexual people are far less likely to come out than other members of the LGBT community, according to a 2017 Pew Research Center survey. Researchers found that only 28% of bisexuals let their friends and families know about their sexual orientation, compared to 71% of lesbians and 77% of gay men. The discrepancy may stem from the fact many straight-passing bisexuals don't feel it's necessary to tell anyone. One 25-year-old bisexual woman told Pew researchers, “Unless I decide to be with a girl long-term, there is no reason for [my parents] to know.”

For some influencers, posting about "Sweater Weather" has kickstarted their public process of coming out on social media, while also celebrating and owning their identity. And because they have a vast following, it often inspires others to do the same:There are currently over 280,000 videos for "Sweater Weather" on TikTok. According to Them, TikTok is quickly turning into a safe space for bisexuals — and others — to come out, often met with a lot of respect, praise, and support.

More like this
30 Clever Ways To Slide Into Your Crush's DMs
By Griffin Wynne, Carolyn Steber and Lexi Inks
Breeding Kinks Have Been On The Rise Since Roe V. Wade Got Overturned
By Lexi Inks
Are Quality Time & Gift-Receiving Love Languages Compatible?
By Lexi Inks
On TikTok, "Cbat" Has Been Named The Worst Sex Song Ever
By Lexi Inks
Get Even More From Bustle — Sign Up For The Newsletter