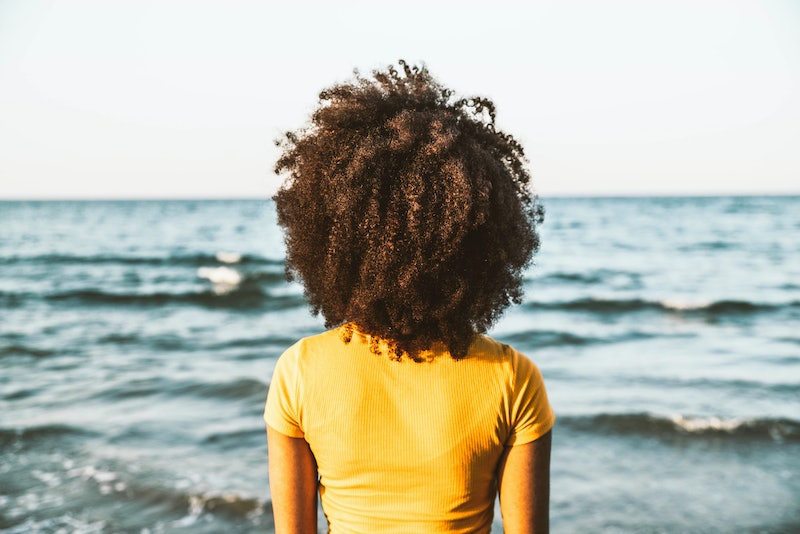 It happens often: your boss has asked you to do something you really don’t have time for (and is definitely outside of your job description), but you figure you’ll update that spreadsheet anyway because really, why argue? When faced with confrontation, your mind repeats “cool” about five thousand times in Jake Peralta’s voice, because the rest of your body is Amy Santiago-ing — must not upset your superior officer at any cost. If you're the type to avoid confrontation as much as possible, it doesn’t mean you don’t ever stand up for yourself — it just means that asserting what you need might not be your first instinct. And you can learn a lot about yourself based on how you respond when presented with a potential showdown.

“Your ability to cope, life experiences, what was modeled by those around you and the implicit and explicit messages you received while you were growing up related to gender, race, culture, society, socioeconomic status, familial expectation and so many more variables can play a role in how a person approaches (or doesn't approach) conflict,” says psychotherapist Lillyana Morales, L.M.H.C. That’s why not all people who tend to avoid confrontation have the same kind of personalities, but there are some common threads — “Just walk away” might be a habitual refrain, for example. Read on for 18 personality traits of conflict-averse people.

Someone who avoids confrontation may simply feel a fight isn't worth the energy, which results in either walking away or changing the subject before it escalates. In other words, you pick and choose your battles wisely. Analyzing a situation before it reaches a point of no return amounts to no wasted breath and no harm, no foul.

“Not wanting to upset others is a common driver of conflict avoidance,” says Sherese Ezelle, L.M.H.C., a licensed behavioral therapist at One Medical. You might know that you need to tell your bestie that no, it’s not OK to cancel your plans for the fourth time in a row with no explanation. But you tell yourself, “Hey, whatever they’ve got going on is important too.” And while that might be the case, it might be second nature for you to rank your own needs as less important than others’ — and maybe not even mention them.

If you’ve been in a volatile relationship before, you’ve seen where confrontation can lead. Foresight warns you that confrontation may not be worth the potential result, which leads to avoidance. “[Someone who avoids confrontation] may feel that the relationship they have with the person provoking them is too valuable to damage with an argument,” explains April Masini, a New York-based relationship and etiquette expert and author.

You might also avoid conflict because you’re just a chill person. “We all have a window of tolerance, and the size of this window varies from person to person,” Morales says. Your tolerance might be high because you’re good at letting things roll off your back. It genuinely doesn’t bother you when all that much when other people are clearly in the wrong — they’ll figure it out on their own time. And meanwhile, you’ve got some video games to catch up on. No point stressing over things you can’t control, right?

If you would most definitely never write an entire album about your ex, Olivia Rodrigo-style, you might just have a more passive personality, says Tina B. Tessina, Ph.D., a psychotherapist and author of It Ends With You: Grow Up and Out of Dysfunction. “Volatile people are familiar (as in family) and they tend to gravitate toward them, but then they are too avoidant to stand up for themselves, so they placate them.” Passivity isn't always a bad thing, but when you don’t stand up for yourself where you should, the negative feels are bound to bottle up.

You Could Use A Confidence Booster

You may need to give yourself some extra pep talks before you say you reaaally want to order pizza for your birthday, knowing it’s not your girlfriend’s favorite. “Avoiding conflict can be well-intentioned, and you can learn how to help it grow and shift if that is what you desire,” Morales tells Bustle. Practicing having confidence in yourself — and affirming that your needs matter — can be a big part of your fight, freeze, or Amy Santiago journey.

You Don't Do Well Under Pressure

Getting burned before is a pretty quick way to teach you to avoid fights. “[Conflict-avoidant folks] learned the hard way that the stress of confrontation makes them uncomfortable, so they avoid it the way a kid who touches a hot stove learns not to do so in future,” Masini says.

In other words, you might be avoiding that confrontation because you’re pretty sure nothing good will come of it. “Conflict avoidance often manifests from a negative experience that may have taught you that it's safer to avoid than to engage,” Morales explains. When a given circumstance signals you to fight, flee, or freeze, the easiest decision for you might be to walk away. The pressure mounts and perceived stress is followed by sweat, an increased heart rate, and worry, and your gut reaction to is avoid the situation altogether.

...Or, You Handle Stress Well

Who needs angst when you have a reliable Rolodex of conflict resolution techniques in your back pocket? It may feel normal for you to have other folks wrapped up in their ‘oh my God, he stood you up again’ drama while you logistically plan for the next important thing. Whether that means you have a high pressure job that you like a lot, or you’re a Capricorn with years of therapy under your belt, either way, you avoid conflict because you’ve got the solution already laid out.

You Value The Status Quo

"People who avoid confrontation tend to value peace and a status quo,” Masini tells Bustle. “They don’t like excitement and they prefer routine where they have a better chance of achieving an absence of confrontation.” You avoid confrontation by not veering off track. You like to know what to expect in your days, from beginning to end.

Just because you value keeping things the same, however, doesn’t mean you’re totally fixed in your opinions. Your friends might value your flexibility; you find it easy to see both sides of a disagreement, but you'd rather not voice your personal view on any given matter, should it sway heavily in one direction or another.

"People who avoid confrontation will keep it light when it comes to conversation,” Masini explains. “They will avoid and change any conversation that has to do with conflict or hot button topics. They skim the surface of conversation and value experiences over deep expression because it’s easier for them to take."

Tessina suggests people who avoid confrontation may be very hard workers (as a result of being inherent people-pleasers). In general, hardworking folks have their minds in many different places, striving to achieve the most within a short period of time or even at once. Another word for it here is overachiever extraordinaire.

"[People who avoid confrontation] may be quite angry underneath, from years of self-repression,” Tessina says. “They can be withdrawn, but not always.” It's possible, common, and fair to harbor emotion over years of habitually avoiding confrontation, and consequently not standing up for yourself. If you find yourself holding grudges or failing to express your emotions, it's possibly a result of this tendency.

You Shut Down Easily

You see a confrontation on the horizon and you dive for cover, because really, who wants to deal with stress from conflict? "People who avoid confrontation feel like a helpless child around the angry person, who seems like a parent, so they don’t have the power to stand up,” Tessina tells Bustle. “If you can remember you are an adult and the equal of the person you need to confront, it will be easier.” Shutting down may be less scary than standing up for yourself in the moment, but practice can just make it a bit better.

Your sleeve is the last place you want to put your heart. “It can be difficult to voice honest opinions for fear of being seen as difficult and less desirable than someone who may have avoided the conflict altogether,” Ezelle explains. The easiest way to avoid getting rejected is avoiding saying anything, you figure, so you tend to keep it to yourself.

You have a clear idea of what you want and what you don’t want — but that doesn’t mean you feel the need to assert it in the moment. It feels normal for you to step back and observe what’s going on with other people without necessarily intervening, even on your own behalf.

It’s entirely possible to be very comfortable asserting yourself — but only once you’ve given yourself some private moments to reflect. If something feels off to you in an interaction, your instinct may not be to verbally resist it right away. Instead, you’d rather think it through and maybe chat about the feelings with some trusted folks before bringing up something that can cause a confrontation.

You’re Healing From Some Heavy Stuff

Turning off in the face of conflict can sometimes be a part of your healing journey, Morales says. “Abusive relationships, environments, and situations may not be a place where we practice assertive communication,” she explains. That means that if you’ve experience abusive situations in the past, you may have learned to put your emotions last and not assert them.

You Value Reading The Room

Direct conflict might not be your style, especially when the room is stacked against you. You might value making sure the situation is as safe as possible before you start asserting what you need. Maybe that means waiting until you’re out for coffee in a public place with someone, or only checking in with them once you’re home alone in your bedroom and can text them on your own terms.

“Conflict avoidance can greatly connect to racial and gender privilege,” Ezelle explains. “For example, a heterosexual white man may feel more comfortable sharing his opinion, even if a conflict may arise, because of the more often than not presumed commonality among those in the room. Whereas depending on the societal climate, there may be very real safety precautions to consider for other groups and as a result, conflict is avoided.” Whatever your preference and safety level, you know how to read a room and you want to make sure things feel safe before you choose the “fight” option.

Tina B. Tessina, Ph.D., psychotherapist, author of It Ends With You: Grow Up and Out of Dysfunction

More like this
20 Things You Should Never Tolerate In A Relationship
By Rachel Sanoff and Kathleen Ferraro
12 Ways You're Sabotaging Your Love Life
By Teresa Newsome and Lexi Inks
Is It A Rebound Relationship Or The Real Thing?
By Carolyn Steber and Lexi Inks
The Viral 'Little Miss' Franchise Is Focusing On Mental Health Next
By Darshita Goyal
Get Even More From Bustle — Sign Up For The Newsletter