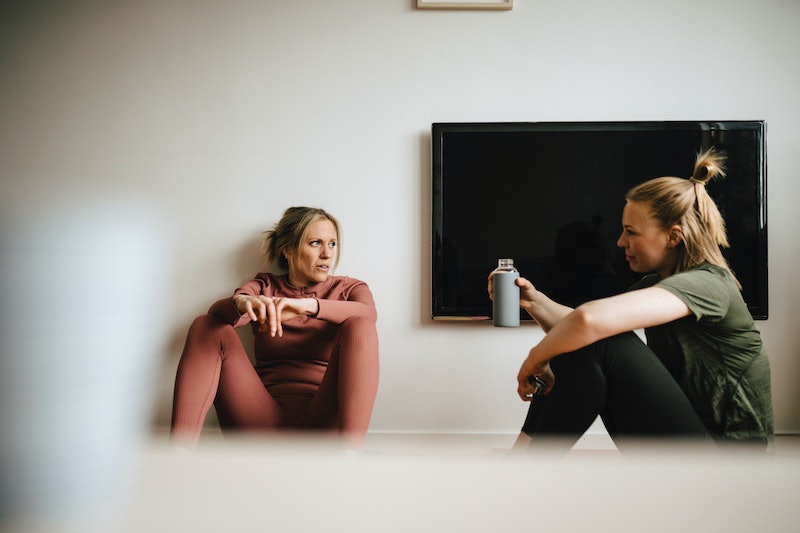 There are several phrases that, when uttered in a relationship, are enough to make your blood run cold. “We need to talk” is one such example. But perhaps the scariest of them all is when a partner asks for space. Not only is it tough to figure out how to do so logistically — especially if you live together — but it can also stir up all sorts of insecurities.

It's rarely as dramatic as it first sounds, but it's hard not to jump to a million and one conclusions. Is she mad? Does he want to leave? These are the thoughts and worries that come to mind — which is why the moment a partner says they need space, the first thing you’ll want to do is think of all the positives. “It’s important for couples to have a healthy level of influence on one another without being completely dependent,” licensed couples therapist India Simms, LCMFT, tells Bustle. Taking time away from each other — even if it’s just for a few hours — helps ensure you don’t merge into one being. It also prevents resentment, Simms says, which has a tendency to build when needs go unmet.

That said, there definitely is a thing as too much space, so be wary of a partner who shoos you away on the regular. "Anything in excess can be a warning sign when it comes to mental health or the health of a relationship," Dr. Kim Chronister, a licensed clinical psychologist, tells Bustle. "If a partner is asking for time away for an extended period, or to the point that the relationship is suffering, it should be addressed."

Either way, you’ll want to talk early and often about how much time you’d both like to spend together versus apart. While giving someone space will look different in every relationship, here are a few ways to get started if you’re looking for inspo.

You don’t have to go big or change your entire life in order to successfully give a partner space. Sometimes small changes really are enough: For example, if you typically vent to your partner after a long day at work, try checking in to make sure they have the bandwidth before opening up.

“This allows your partner to tell you if they are focusing on a task or if they are up for a chat,” Simms says, and vice versa. Little habits like this one go a long way in regard to respecting boundaries — and thus creating a greater sense of space in your relationship.

2. Establish “Do Not Disturb” Zones

For a practical tip, consider creating a “do not disturb” zone somewhere in your apartment. This is where you or your partner will go to get some privacy whenever necessary. Maybe it’s the bathroom, Simms says, and you’ll agree to never walk in on each other.

A set-off zone could also be tech-related, like agreeing that you’ll stop texting each other after a certain hour. “Talk to one another about ways you could use more space and implement a few new habits to make it happen,” she says.

3. Text Each Other Less Often

Speaking of texts, you could also create space by contacting each other a little less often in general. “No one wants to be sitting at their phone feeling like they have to answer one message after another all day long” wellness coach Christina Dufour tells Bustle. If you agree to text — or Zoom or call — less often, it can create that sense of space you’ve both been craving.

If you and your partner typically go everywhere together — as couples tend to do — see how it feels to venture out on your own a little more often, especially if it’s been ages since you last saw close friends without the other in tow.

“Being in a healthy and connected relationship doesn't require you to spend all of your free time together,” Isabelle Morley, Psy.D., a licensed clinical psychologist, tells Bustle. “In fact, it can be very beneficial for the relationship if both partners get time with other people as individuals.”

5. Make It A Point To Relax Separately

While you can obviously watch Netflix together, read side-by-side, and continue all the cozy things you like to do as a couple, there’s something to be said for establishing separate chill-out routines. For example, “you could watch your favorite show while your partner reads in another room,” Morley says.

This one is particularly handy if you’ve both been working from home. Being around each other 24/7 means you’ll have to come up with structured ways to get away — even if you’re only a room apart.

While you’re at it, make a point of establishing your own hobbies that’ll serve as an excuse to spent time apart. Think along the lines of taking a class, spending an hour at the gym, jogging around town, or whatever else sounds fun. Bonus points if you mark the occasion on a shared calendar so you and your partner have a visual of all the moments in the month when you’ll be flying solo.

You don’t need to take separate vacations if that feels weird, but you certainly shouldn’t hesitate to go away for a long weekend with friends, either. As Morley says, “This time apart can be rejuvenating for both of you — allowing you both to miss and appreciate each other, making the reunion that much sweeter.”

While going on a date is kind of the opposite of “space,” purposefully doing something fun as a couple will make it a heck of a lot easier to swing in the other direction and spend time apart. A date night will leave you feeling bonded and close, which will make it easier to spend time apart. It’ll also give you a “high” to live on till the next time you hang out. Remember, it’s all about balance.

The thing about spending time apart is you don’t want to be all loose about it — unless, of course, that works for your relationship.

It typically helps to be super structured, whether that means using the trusty shared calendar or checking in regularly to discuss when you’ll be back, when you’ll be able to answer the phone, etc.

If you suspect your partner could use (or secretly wants) more space, it might be nice to gently nudge them in that direction. “Encourage them to put some time on their schedule in advance,” Dr. Jacob Santhouse, LCPC, a licensed clinical professional counselor, tells Bustle. “This is important because some people may be reluctant to take time for themselves.”

11. Get Ready To Compromise

“A person who is introverted may require more time to themselves,” psychotherapist Alex Ribbentrop, LCSW-QS, tells Bustle, which can be tough for an extrovert to understand. But you don’t need to fully grasp why they need time alone in order to help them get it.

Of course, it’ll be up to your partner to fully explain their feelings, as well as what they need. Only then will you be able to come up with a game plan, including finding ways to compromise, so that you both have a positive experience in your relationship.

12. Consider Why “Space” Weirds You Out

Does the concept of spending time apart make you feel weird, anxious, or upset? According to relationship coach Morgan Van Epp Cutlip, Ph.D., it might be due to past negative experiences, like that time your ex broke your trust after asking for space.

This is something your current partner needs to know ASAP so that they can offer support, reassurance, comfort, and compromise. If the problem runs deep, however, that’s when you may want to call in the help of a therapist.

After you dig through what happened, Cutlip says, it’ll be so much easier to create space without feeling the world is coming to an end.

Instead of trying to guess what your partner is thinking — or worse, waiting for resentment to bubble over — make a concerted effort to talk about your space requirements early and often. Not only will it keep you on the same page, but it’ll also make this potentially awkward topic a lot easier to talk about. As Ribbentrop says, “The ability to effectively and honestly communicate our thoughts and feelings requires practice.” So if you or your partner wants some space, don’t hesitate to make it known.

This article was originally published on Sep. 20, 2016