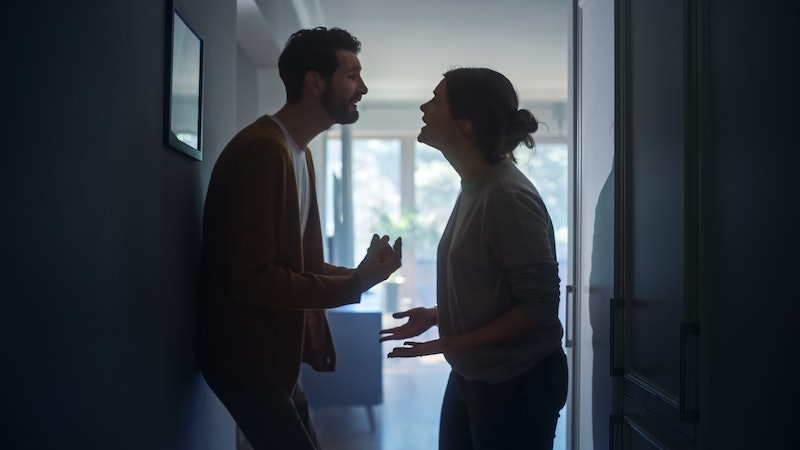 Unless you’ve got both excellent communication skills and are comfortable with confrontation (kudos to you if that’s the case), handling a disagreement with a partner — or anyone you have a relationship with — is often unpleasant. Resolving a conflict with your S.O. may not always be possible alone, either — sometimes a third party is called in to help facilitate. While the idea of something like couples therapy could be a proper solution, others struggle to find a healthy and emotionally safe way to bring another person into their line of communication.

Involving a potentially biased “middle man” (like a good friend or family member) might seem like a good idea, but experts say this could wind up being a form of triangulation — aka a pretty complex form of emotional manipulation. “Triangulation is a relational process that occurs when one party in a dyad — meaning two people — involves a third person to help reduce stress or conflict within the dyad,” says licensed clinical social worker Iris Bowen. Sounds innocent enough, but, according to Bowen, this becomes manipulative when one partner in a conflict with another uses a third person in an attempt to control or de-escalate the situation.

No one wants to experience emotional manipulation or abuse at the hands of a partner, but tactics like triangulation can be difficult to detect. If you feel like the definition sounds familiar, here is all the information you need to know about this form of manipulation, according to experts.

What Is Triangulation In Relationships?

With triangulation, involving a third party isn’t meant to be helpful (for the two people in the relationship, at least). “This is usually done to create emotional distance and space between the abuser and the person they would like to control or manipulate,” says licensed marriage and family therapist Tameca Dove. “A person uses triangulation to manipulate others and communication is used as a way to control and mislead.”

So, what can distinguish triangulation from a partner simply involving a third party to ease tension or help resolve a conflict? According to licensed clinical social worker Maria Elias, triangulation is when one person in a two-person relationship doesn’t communicate with their partner directly. “Rather than wanting to end an argument or help repair any emotional disconnection in the relationship, the person using triangulation does so for their own personal gain,” Elias says.

By bringing in the third party, the manipulator doesn’t have to take responsibility or face the consequences of how their actions have affected the other, and they have the opportunity to shift the narrative using the different perspective of the third person. When used improperly (read: not with a licensed therapist, counselor, or unbiased third party in a non-manipulative way), creating a “triangle” of communication is a form of emotional abuse and can take a devastating toll on any kind of relationship, according to licensed clinical social worker Leah Cohen.

Something important to note, however, is that triangles may sometimes provide positive benefits, says Bowen. “The only time this can happen is when the third party is able to stay emotionally removed while still acknowledging both perspectives of the dyad,” she tells Bustle. In this situation, she notes that a couples therapist is a fitting example.

How Does Triangulation Show Up In Relationships?

There are many different ways that someone can use triangulation to get what they want in a relationship, and it can sometimes be so subtle that even the person using the tactic doesn’t realize they’re doing it. In this case, Bowen gives the example of parents with children. “With couples, we may see a triangle form between parent and child, such as a parent using their child to avoid spending time with their spouse or to express frustration about their spouse’s behavior,” she tells Bustle. “Triangulation does not necessarily have to involve bringing someone into the relationship for feedback or support — it can also involve choosing a third party to exclude or hyper-focus on as a method to avoid conflict within the dyad.”

Another possible scenario would be in a non-monogamous setting; in a polycule of three or more partners, triangulation can still be used for one partner’s gain. “[In a polyamorous relationship], a couple [could be] dating a single person and the couple tries to see who can get closest to the single person — unbeknownst to the single person,” says Dove. “The couple is in competition with each other and acts accordingly with their interactions, communication, and connection.” Additionally, if a conflict were to happen between two partners in a polycule, one partner could use their metamour (their partner’s partner) to break the line of communication and manipulate the metamour to take their side in the argument.

According to Elias, some of the signs of triangulation in a relationship may be more simplistic than the behavior itself. “Some of the signs include feeling like your boundaries are not being respected, feeling anxious and insecure about your relationship, and feeling pressured to fulfill the demands of the other person in order to make sure they are happy,” she tells Bustle.

More nuanced examples are also possible, especially when the act of triangulation is intentional. According to Cohen, this can involve a lot of “he said, she said, or they said” statements instead of hearing perspectives directly from that person. “Another example is when one person seems to have all of the information and an unequal distribution of power or influence, and another involves having one person or party being seen as ‘the enemy’ or is devalued in some way by the others,” she says.

How Does Triangulation Affect You?

On a foundational level, falling victim to triangulation can cause you to experience many of the same consequences as other forms of emotional abuse. For one, it can impact your self-esteem and self-worth, according to Elias. Beyond that, it can create doubts in relationships and lead to unhealthy partnerships. “Triangulation can also lead the person being manipulated to experience anxiety, depression, conflicts in other relationships, and codependency on a partner,” Elias says. And, similar to gaslighting, this behavior can lead to feelings of instability and insecurity in anyone who experiences it.

While it’s rare, Bowen also points out that there are some cases where involving a third party can be helpful during a disagreement. “It’s important to acknowledge that triangulation can temporarily work: It can feel really good to vent to someone else about the frustrations you may be experiencing within your dyadic relationship, and talking with your support systems about challenges you experience in your life is a healthy coping mechanism to use.”

The key to using it in a healthy way, as Bowen explained, is fully resolving the conflict within the two-person relationship even after the third person is detached. Otherwise, she tells Bustle, “Triangulation can increase avoidant behaviors, make people feel ganged up on, and in cases where children are used by adults to form a triangle, it can cause a number of developmental and behavioral issues.”

How To Navigate Triangulation In Relationships

Once you understand that triangulation can be used, at times, in a healthy and productive way, it’s also important to learn how to intercept the behavior when it’s not. Cohen explains that this intervention should involve all parties involved. “When you realize that there may be some triangulation going on, the most effective and swiftest way to resolve the issue is for all people involved to have a conversation as a group,” she says. “Identify which channel does not have communication flowing, increase the flow of communication between all channels — ideally in a group where all parties are present to avoid further triangulation — [and] establish norms for communication moving forward.”

Confronting your insecurities and being able to communicate them can also help, according to Elias. This kind of communication fosters an emotional “safe space” in the relationship, wherein both partners feel comfortable stating their needs. “Setting healthy boundaries in relationships and ensuring that those boundaries are respected is also helpful in preventing and addressing triangulation,” she says. “Additionally, seeking therapy can be helpful in noticing patterns of triangulation and learning healthy ways to address it.”

If you have experienced triangulation in the past or are wanting to move away from it now, Dove explains that — although it’s difficult — you should focus on not letting that experience make you bitter and closed off to connecting with others going forward. “It is important to begin focusing on what you want and need out of a relationship,” she says. “It may take time to learn to trust others and yourself after experiencing triangulation. However, it is important for a person to begin new relationships by being more intentional, setting boundaries, and speaking up about red flags as soon as you notice them after experiencing triangulation.” In short: Try not to let the negative experience of being triangulated stop you from thriving in life.