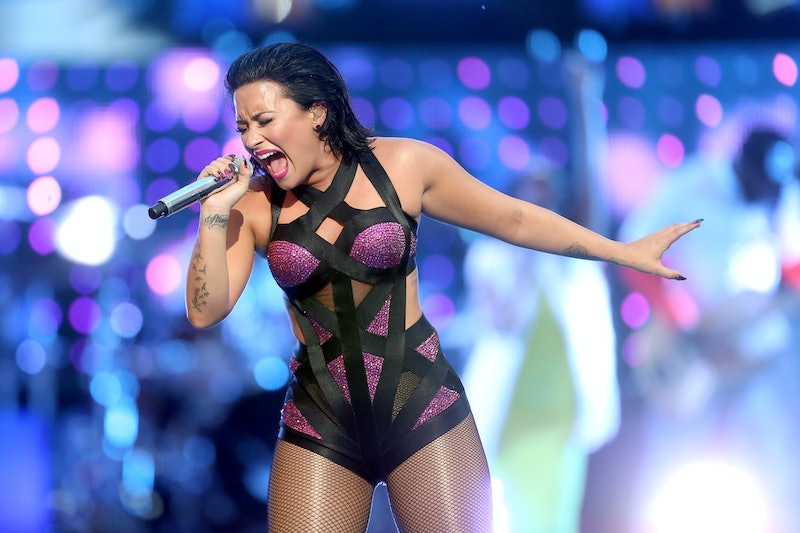 I'm not one for assigning meaning to things without cause or reason, but when it comes to the 2015 MTV Video Music Awards, there were a few moments that seemed especially body positive. While there's no way to tell if these particular gems were orchestrated with the intention of actually being body posi (unless I was personally interviewing the stars and asking them, of course), I can't help but feel that they possess a special kind of power. Something about people unapologetically embracing themselves — their personalities, their bodies, their likes and dislikes — screams body positivity and self love. These particular stars aren't vocal members of the body pos community, per se. But they're human — and that means they've grown up with the same standards of beauty, "perfection," and acceptability that the rest of us have had thrown at our psyches from Day 1.

This year has seen a special kind of surge of body positivity at awards shows, arguably starting with the Met Gala on May 4, during which stars of many sizes embraced the booty in a raw, natural kind of way. Some may say that it's easier for women whose bodies/aesthetic adhere to Western standards of beauty to strip down or admit to loving their curves or wear a 99 percent sheer gown than it would be for a fat person to do the same, and I do believe that has some truth to it. But I personally think that it's always difficult to put yourself in a potentially vulnerable situation, regardless of size, gender, or style.

People are never shy about critiquing the bodies and lifestyles of others, and when you're in the public eye, chances of getting trolled about anything and everything are rather high. So I tip my metaphorical hat to the folks of the VMAs, whose actions tonight inarguably had body posi value, whether that was their conscious intention or not. Here are the most body positive moments of the 2015 VMAs.

1. When Miley Cyrus Wore Suspenders & Basically Nothing Else

We all knew that Miley Cyrus was going to bring it. After all, MTV gave her free reign when it comes to hosting the evening. Her red carpet look consisted of silver metallic suspenders and almost nothing else on top — and this demonstration of fearlessness in owning her body, her quirk, and her penchant for the OTT and kitsch couldn't have been better.

The bodies of female-presenting individuals have long been over-sexualized and put on display. But by opting for this kind of ensemble on her own terms — in her own beautiful weirdness — Cyrus shows total ownership of her sexuality and her body — both of which are hers and no one else's.

Call me crazy, but we need to de-stigmatize vagina-talk, y'all. If you ask me, when an empowered woman wears a sheer dress that strategically covers her "tutu" (as Piper Chapman's mother would say) but not much more, she forces people to come face to face with their ideologies, some of which might correlate revealing fashions with slut shaming.

Chrissy Teigen has been making a name for herself as a body positive icon this year, and I definitely believe she can be if we're willing to examine her role in the movement critically, as Bustle's own Amanda Richards highlighted. But one thing's for sure: This gown is a reminder that she's a woman unafraid of her body and whatever social stigmas people may attach to it.

It's always easy to assume that as celebrities get more and more renowned, they'll leave the little people behind and opt for a world of couture and total glamour. Rebel Wilson has never been like that. The actress and comedian extraordinaire wore beloved plus size brand Eloquii for the VMAs, the beautiful dress matching her new pink 'do.

Eloquii is a favorite brand amongst many members of the body pos community, especially after it extended its size range up to a 28. Wilson's sartorially manifested support of the plus size market and the people involved in making it better is like a subtle shout out to the body posi community.

Amber Rose and her squad made one of the boldest statements of the night with their These Pink Lips ensembles. The gender fluid group tackled everything from slut shaming to gender identity to sexual orientation, and their squad has officially become the only squad. Rose dedicates much of her time to fighting against slut shaming and for LGBTQ rights, and this demonstration of that passion for a cause is body positivity at its finest.

At the end of the day, there's nothing more body positive than staying true to yourself — to the fashions, the music, the makeup (or lack thereof) — that make you feel most like you. Britney Spears has never been afraid of being herself, and that's certainly a body posi mentality.

I just love that she's still rocking cutouts and glitter and sparkles and plunging necklines 15 years after she was known for it. Plus, a belly peek-a-boo is always a body positive move in my book — because bellies are stigmatized, but, really, all bellies are beautiful.

Demi Lovato has been extremely vocal about her struggles with an eating disorder, and has broken down stigma surrounding mental illness more than a few times, which is precisely why her "Cool For Summer" performance felt so significant. As I mentioned before, it's not easy for anyone to strip down — let alone in front of thousands of people, let alone when your relationship with your body has been especially trying. Tonight, Lovato looked strong, though. She was fearless and bold and unafraid.

7. When Kanye Had Hope For Future Generations Of Kids

Let's ignore, for one moment, the fact that Kanye West just announced his presidential candidacy for 2020, and focus on the rest of his Video Vanguard Award acceptance speech. He talked about a lot of stuff in that monologue, from the music industry to his former beef with T.Swift to being changed by being a father. And as we all know, when Kanye makes a speech, it's going to have some gems. Speaking on the Millennial generation and the changes he hopes to see for future generations, Kanye said, "We're not going to teach low self esteem and hate to our kids."

It's a beautiful sentiment — a hopeful one. At the end of the day, it's a crucial component of body positivity. If we can someday get to a point when children aren't conditioned to hate themselves — to hate their bodies — from childhood and onwards, there's no telling just how much greater the world will be. But my gut says probably a lot.