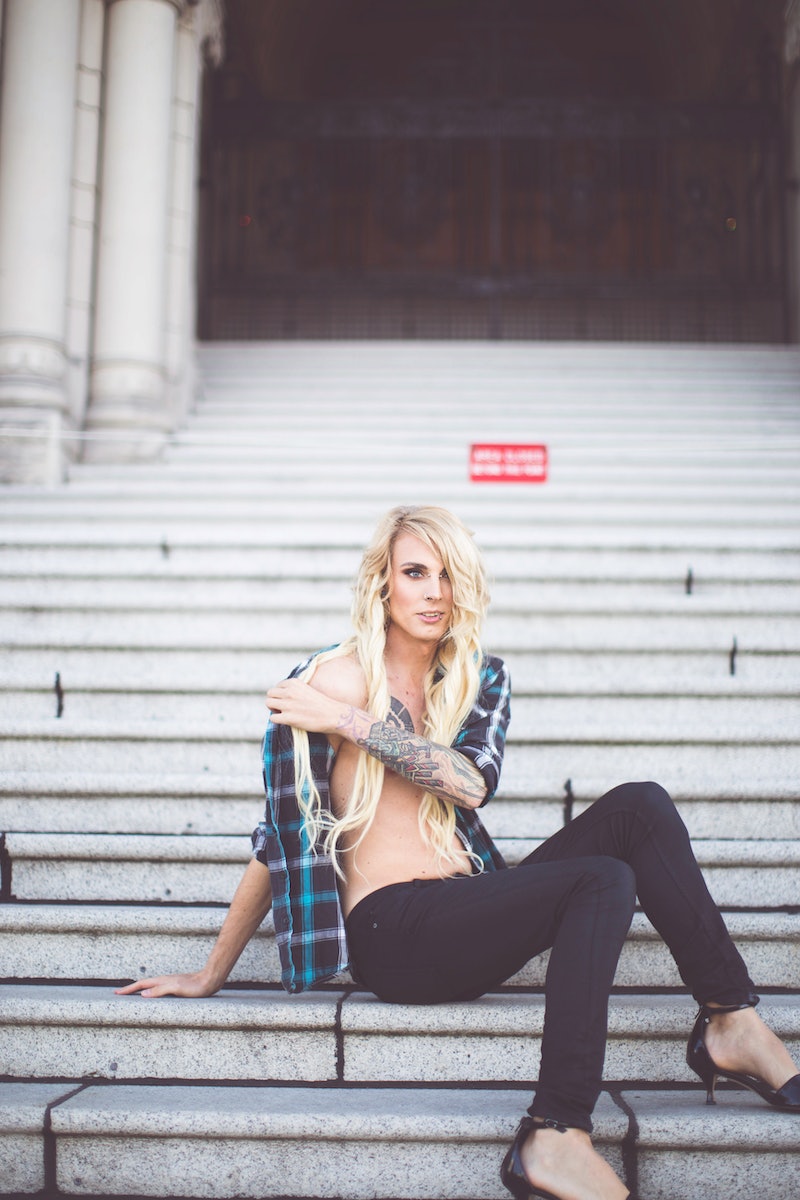 At what point do breasts come to be considered "scandalous?" This is the question asked by transgender woman Courtney Demone's project "Do I Have Boobs Now?" as she documents her gender transition through hormone replacement therapy (HRT). Much like #FreeTheNipple, Demone's focus is on the censorship of women's bodies — and, of course, their subsequent sexualization. After all, censorship implies that the object in question is unfit for the public eye; in short, it continues the discourse that women's bodies are shameful. Relegating nudity to a private setting, however, merely strengthens the association between female nudity and sex.

The absurdity of all this has been discussed before, often in conjunction with #FreeTheNipple, but as Demone points out on Mashable, crucial voices have been left out of the conversation. "#FreeTheNipple has failed to show the diverse ways in which people with differing bodies are sexualized, fetishized, exoticized, and shamed," she writes. "It has also failed to recognize that baring her nipples doesn’t mean freedom for every woman."

Think about it — who are the most famous faces (and nipples) associated with #FreeTheNipple? The supporters who get the most coverage are generally attractive, privileged, cis people: You're much more likely to hear about Miley Cyrus, Rumer Willis, Matt McGorry, or Chrissy Teige's efforts. Obviously, this isn't to say they shouldn't be included in the campaign; that would kind of miss the point of nipple freedom, wouldn't it? However, as Demone writes, it's time we move past the "narrow definitions of femininity" used to protest censorship.

As Parker Molloy wrote in response to a Chicago Tribune article about the city's laws of toplessness (a motion to dismiss a lawsuit over the right of women to go topless claimed that "female breasts are considered erogenous in a way that male breasts are not"):

When you've gone over all the possible defenses for such a double standard in institutionalized views of people's bodies, there's no getting around it: Women are seen as inherently sexual objects, whereas men are granted the right to exist in all sorts of states, only being seen as sexual at times when they actually choose to be. Therefore, their bodies are not considered lewd when not engaging in a sex act. Women, by the mere act of existing, are perpetually, permanently, non-consensually engaging in a sex act, and are therefore, considered lewd.

This is why #FreeTheNipple has to be inclusive for it to accomplish its goals — not only of cis people who fit a certain set of beauty ideals, but also of LGBT, agender, and non-binary people; people who don't fit society's arbitrary beauty ideals; and more. In a word, everyone. Otherwise it just becomes about freeing the sexy nipple, when what it really needs to be about is freeing all the nipples.

This is where "Do I Have Boobs Now?" comes in. To protest Facebook and Instagram's nudity policies, Demone has chosen to post topless pictures during her transition on social media under the hashtag #DoIHaveBoobsNow. "At what point in my breast development do I need to start covering my nipples? ...At what point does society say it’s unacceptable for them to be out?" she asks.

According to Demone, she's already begun to experience the joys of being seen as a woman in our society: Condescension, disrespectful Internet messages, and threatening street harassment. In an article for Mashable, she reflected on the various ways everyone from strangers on the street to people she knew previously began treating her differently once she came out — one friend even advised her to shave her armpit hair. This constant barrage of unwanted image policing is no doubt familiar to most women, but for someone who had only recently begun to appear "feminine" in the eyes of society, such intrusiveness was jarring.

"This change happened slowly, proportional to my perceived femininity... I haven’t changed much, but society’s perception of me has changed immensely," she writes.

Almost every woman experiences misogyny on a regular basis, but trans women endure a special brand of sexism, mixed with society's discomfort with those who challenge perceived gender norms. Demone recognizes that censorship might seem insignificant in the face of inadequate access to healthcare and the shockingly high rates of violence in the trans community, but the policing of women's breasts is "a clear example of the sexism that comes with living in a female body."

Are there bigger things to worry about? That depends on your point of view. But that doesn't take away from the fact that "Do I Have Boobs Now?" provides a sorely-needed platform to protest censorship for those who are often overlooked in society: People who are transgender, disabled, or inhabit any other body that doesn't fit the preferred societal mold.