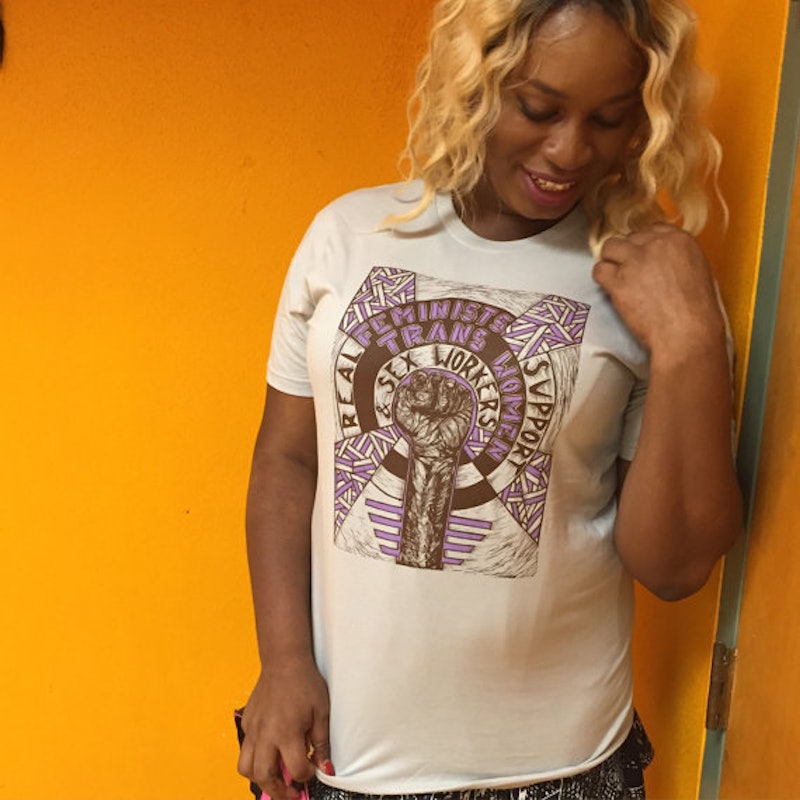 I've been a feminist for as long as I can remember — (I'm pretty sure I came out of the womb protesting gender inequality) — but that doesn't mean I've never been guilty of unintentionally excluding women from feminism. As a young, thin, white, cisgender, able-bodied woman, the primary way I've personally needed to look at feminism for most of my life has been through the solitary lens of gender — and this has, unfortunately, led me to be accidentally exclusive at times.

Obviously, I'm not proud of the ways I've failed to make my feminism inclusive in the past. That said, I think most feminists have been guilty of fixating on their own brand of feminism instead of considering what feminism means to other women, and most of the time, we don't even realize we're doing it. Feminists are humans, so it stands to reason that we're going to mess up sometimes — but part of being a feminist is routinely checking your privilege, and making sure your feminism is as inclusive and intersectional as possible.

You absolutely should be expressing what feminism means to you — whether you do that through speech, art, wardrobe choices, or the written word. That said, you also need to make a habit of asking yourself this question: are you listening, too?

It's not possible to stay educated about the struggles women of other races, religions, political affiliations, nationalities, sexual orientations, and gender identities are going through if we don't seek out those voices, and genuinely listen to what they have to say. So make a point to read about intersectionality when you can, and if you're not much of a reader, then YouTube it.

2. Not Thinking About How Feminism Relates To Older Women

As a woman in her mid-twenties who generally writes for other women in their 20s and 30s, I know how easy it can be to focus on how feminism relates to young, working, menstruating women — but that can potentially exclude several demographics of people who identify as female, and this includes older women.

Two of the biggest issues surrounding the dialogue on mainstream feminism are reproductive rights and the wage gap, and those certainly are huge issues that all feminists need to care about — but it's important that we consider looking at feminist issues through the lens of ageism as well.

As Amy Schumer's sketch, "Last F*ckable Day" so hilariously portrays, older women are excluded from working opportunities all the time in ways that older men don't have to deal with. Regardless of our age, the "worth" of a woman is so heavily tied to whether or not society deems her body beautiful enough. If this weren't the case, the fact that 55 year old, plus size model Nicola Griffin landed a modeling gig with Anna Scholz wouldn't be a big deal — but it's kind of a huge deal.

Additionally, it's no secret that while older actors like George Clooney are labeled, "distinguished" for getting older, actresses start to be considered "old" by 35. So while this is an ageism issue, it's also a feminist issue, and we should all be working to change it.

3. Not Thinking About Racial Inequality

We can't continue to talk about feminism without also talking about race, because leaving race out of the feminist conversation is a guaranteed way to exclude literally all women of color from feminism.

As a white woman, I've never really had to think about how my race adds to the gender inequality I face, because being white hasn't had a negative affect on my life. However, the more I learn about intersectional feminism, the more I realize that race has not always been a part of my personal dialogue on feminism, and that really has to change. If you're not making an effort to listen to what women of color are telling you about how race has shaped their feminism, you need to start.

As an unapologetic feminist, I have a really difficult time with this one. I have never been able to understand why some women don't want to be labeled as feminists — especially because most of those women are feminists whether they want to claim the title of not. However, one thing feminism should never do is shame other women, and criticizing women who don't want to be called feminists is shaming in action. Many women might not identify with feminism because the movement has historically excluded them.

Even when that's not the case and we judge women like Meryl Streep or Sarah Jessica Parker for preferring to call themselves humanists instead of feminists, or preferring to avoid labels altogether, we are simultaneously shaming and excluding them. So even though it may not make any sense to you, try not to verbally attack women who don't consider themselves feminists. Your words won't change their mind, but they will 100 percent make them feel excluded from the feminist movement — and that really couldn't be more counterproductive. Plus, it's just mean.

5. Neglecting To Seek Out LGBTQ Perspectives On Feminism

If you're not seeking out LGBTQ perspectives on feminism, or you're not taking into account how feminism might look different to a bisexual, lesbian, or trans woman, then you're unintentionally excluding a lot of women from feminism.

We live in a society that promotes heteronormativity from birth. That said, it's important that feminists of all backgrounds make an effort not to exclude each other, because women need other women. So even if you're not a part of the LGBTQ community, you should try to consider how gender inequality affects member of that community differently, because it most definitely does.

More like this
Sandra Bullock, Girlboss Extraordinaire
By Matt Harkins & Viviana Olen
10 Times Boris Johnson Got It Wrong On Trans Rights
By El Hunt and Sam Ramsden
You're Probably Doing These Gross Things Around The House Without Even Realizing It
By Rachel Bar-Gadda
If Your Refrigerator Is A Mess, These 25 Organizing Products Can Help
By Courtney Young
Get Even More From Bustle — Sign Up For The Newsletter