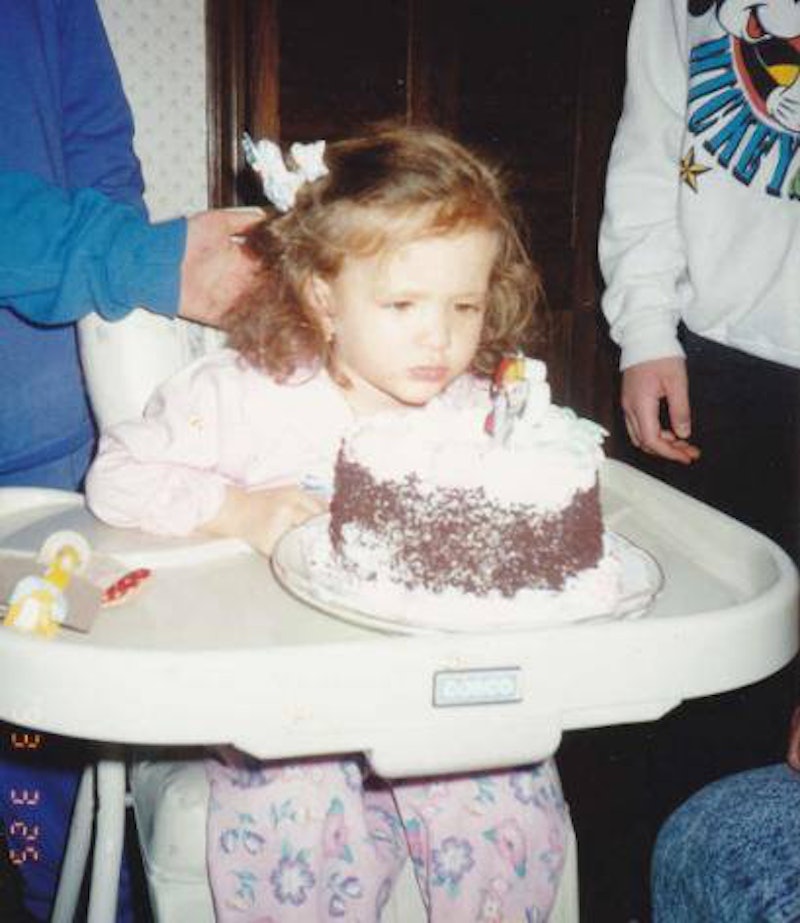 I don't presume to think that I'll be "the perfect parent" because I don't presume to think there is such a thing. Amongst the things I hope I will be able to translate to parenthood, however, is being able to teach my kids not to fat shame. That being said, I tend to fall on the nature side of the nature versus nurture department, so it's not like I type these words with the expectation that my moral code be one my future son, daughter, or anything in between adopts for themselves.

I know there's only so much I — and all of us — can do, or teach, or attempt to convey before outside factors (call it the media, call it other kids, call it the fundamental components of contemporary living) or natural ones (since people do seem, to me, to develop their own guiding principles sans environmental factors of any kind) get in the way of those lessons. But we can sure as hell try anyway.

In a world (read: first world) where 47 percent of 11 through 14-year-olds have been shown to have poor self esteem while almost all girls diet by the age of 10 and likely more boys than we know are dealing with the same exact shit but can't really talk about it (thanks, machismo), the need for combatting body stigma and fat shaming, IMO, is pretty evident. Here are some little ways we might be able to teach our kids that the "F" word isn't such a bad thing.

1. Input Fat Positive Media Into Their Lives Whenever Possible

I seriously hope that by the time I have kids, fat people won't be seen in the media if and only if they fall into the following tropes: The funny fatty, the over-sexualized fatty, the designated, ugly, fat friend, the pitiful fat ass, or the butt of the joke. Likewise, I dream of the day when all bodies (fat ones, disabled ones, ones of color, non-cis ones) garner equal representation on my TV and in my magazines. If it hasn't happened, however, I can try my best to introduce my kids to positive fat representation elsewhere. And so can you.

As long as the Internet remains alive, there will likely be fat people on it taking a stand for themselves. There'll be activists, there'll be models (indie or signed), there'll be a select few characters in movies or shows who deviate from the aforementioned tropes. There'll be Lumpy Space Princesses or body positive Disney characters. We can't control everything our kids watch, but we can definitely try to avoid playing movies or cartoons that rely on fat shaming as a plot point.

2. Have Fat Positive Art Around The House

Personally, I plan on surrounding myself and my kids with gorgeous fat positive artwork. From the images of fat posi photographers like Substantia Jones to illustrations to a couple of Fernando Botero paintings or mini versions of his sculptures, I will make it a point to showcase fat bodies beautifully.

The more your kid sees fat bodies represented in a way that isn't tied to shame or stigma or anything remotely bull-shitty, the more those bodies will seem normal (because all bodies are normal). This doesn't mean you have to deck out your whole house with photos of fat bods. But keeping your artwork diverse is undoubtedly a positive thing to do.

3. Teach Them That Fat Is Not A Bad Word

I call myself fat constantly, and will continue to do so well into parenthood. I don't do it because I want you to tell me, "No, you're not fat. You're beautiful," because I know I can be both. And I'll be damned if I don't try to instill that very simple fact into my kid's day to day life.

By expressing to your child that "fat" is not synonymous with ugly or lazy or undesirable or bad, you can hopefully begin to combat the stigma cues they'll be receiving from the mainstream. Tell them that fat is just a descriptor. Tell them that it's no different than being tall or short. Tell them that all bodies are good bodies. And if you're fat yourself, tell them that you love your body (provided it's not a lie).

If ever my kid presents me with the idea that fat is inherently sucky, I'll have no qualms with telling them that learning to love my fat has been my ticket to a much happier, more fulfilled, more exciting, more self-love-inducing life.

Until I learned how to love my fat body (I was definitely older than 20), I don't remember a time when fitness wasn't about weight loss. Even before I was actually fat, I would overhear my sisters calculating how many hours of cardio it would take to burn off the calories they'd just eaten. I would listen to my mom as she expressed how she needed her gym membership back stat because her visible belly outline wasn't going anywhere on its own. I'm sure they weren't trying to condition my 6-year-old self, but that kind of messaging is exactly the sort of thing that does influence your perception of working out.

Most of us likely want our kids to be able to experience the endorphins that can come as a result of running around or doing jumping jacks or swimming like a mermaid. But perhaps we should try to teach them that there is no greater pleasure than turning a fitness routine into something body positive. When exercise is allowed to be about overall wellbeing, mental health, and physical health — and not remotely about a number on the scale — it stops being a scary thing. It stops being a fat shaming thing.

5. Make Sure They Know There Are A Lot Of Misconceptions About Fatness & Health Out There

Tell your kids that being fat doesn't automatically make you less healthy than anyone else. Tell them that consuming cholesterol actually isn't always bad for you. Explain to them that BMI is not an indicator of health, and that words like "overweight" or "underweight" aren't the be all and end all (and that they mean different things to different people, because there is no one universal weight all bodies should be). Talk to them about the principles of Health At Every Size. Tell them there's a difference between subcutaneous fat (the jiggly stuff you can physically touch) and visceral fat (the stuff that wraps itself around your organs). Tell them that weight loss diets aren't designed in a way that works. Above all, remind them that whether someone is clinically healthy or clinically unhealthy, that person is no less worthy of acceptance or self-love.

6. Embrace Your Own Fat

Whether fat or skinny, tall or short, I don't think I've ever encountered another human with 0 percent body fat. Despite the fact that we're told time and time again that all fat is bad, the human body needs it to survive. So, we all store some of it, and that's often manifested in rolls or cellulite. If you want to teach your kid that fat isn't bad, please — for the love of god — don't treat your own fat like it's the worst thing to ever happen to you.

Wear a bikini in public, if you're comfortable doing so. Wear those shorts you love. Don't be afraid of your VBO. Don't shy away from body-hugging cuts because you're worried about your back boobs. If we treat our own fat like something to be hidden — like something that's going to traumatize passerby and offend the dearly beloved public — we're never going to convince our kids that it isn't something to hate.

7. Be Open About Sex

It's important to me that my kids know that sex is weird and can be gross and isn't always like that rom-com scene where everything is candlelit and everyone is perfectly oily. It's also important to me that they know that — contrary to popular belief — you don't stop being able to have or enjoy sex when you're fat.

As a woman who has dated a man very literally half her size for several years, I know the misconceptions out there. "You can't ride because you'd crush him!" "How can he even get in there when your thighs are so big?" "Aren't you afraid of hurting him?!" "Aren't you embarrassed of him seeing your rolls?" This is very gendered language, I know, but the same basic principles are heard the world over when it comes to fat sex.

And you know what? All those principles are complete and total bullshit. Being fat doesn't stop you from getting jiggy with it. Please make sure your kid knows that so they don't grow up thinking that fatness gets in the way of experience.

Too often do we hear people associate someone's fat with their character. Whether we're talking about Chris Christie or Ursula from The Little Mermaid, a lot of people seem to maintain this idea that someone's fat is intrinsically linked to their moral compass. IMO, it's probably why Chris Christie is never just called an "asshole." He's called a "fat asshole." It's why Ursula isn't just a "bitch." She's a "fat bitch." It's possible that as a result of hearing so many asshole-ish fatties described by their weight, we begin to correlate fatness to being a bad person. But this simply isn't the case.

Make sure your kids know that bad people exist. Make them aware that there are bullies and Internet trolls and rude relatives and mean subway passengers, and that they'll likely encounter the many degrees of being a crummy person throughout their lives. But also make sure they understand that bad people come in all shapes and sizes.

Once you've gone through all of the above, and your kid is schooled on health and fitness and the ways of keeping those two things body positive, they'll hopefully begin to realize that food — like body size — is not an indicator of morality. But you'll probably want to reiterate it nonetheless.

Although I am not suggesting that you allow your child to eat at fast food joints three times a day, seven days a week, I am suggesting that you express (to the best of your abilities) how horrifying it is to equate a cupcake to how "good" or "bad" a human you are. Don't allow them to feel fear about eating. Don't let them get away with saying things like, "But that cookie will make me fat." If that cookie is going to make them happy and allow them to feel like they're living and experiencing the beauty of the world, then please encourage them to eat the damn thing (it's likely not going to make them fat anyway).

Along the way, remind them that fearing fat means you're linking together a body type that many, many people identify with to something scary. In doing so, you are being nothing short of cruel and marginalizing to the people who do identify with said body type.