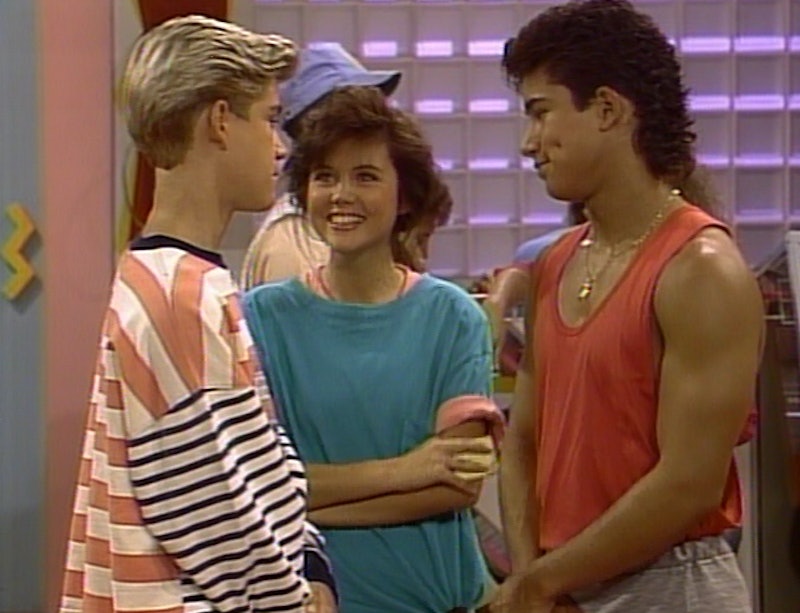 With the present-day revival of '90s classics such as Full House and Boy Meets World and the return of crop tops in stores everywhere, it's safe to say the world is crazy for everything '90s. And who could blame 'em? The '90s were a fun, colorful time before smart phones, Twitter, and having everything at your fingertips instantly. Instead of setting a DVR to record shows, I used to tape them on a VHS. Of course I'd watch them live — commercials and all — but I'd still tape them to go back and re-watch my favorites over and over again. It seems hilariously old-school now, but that was the way things worked then. Obsessing over TV shows isn't anything new, of course, but the way it's done now certainly is. So instead of physically rewinding a VHS tape (how tedious!) now you can get sucked into a Netflix vortex and watch an entire series of a show without ever leaving the couch. How wonderful is technology?!

Without further ado, I present the best '90s TV shows that you absolutely must watch on Netflix ASAP. Whether you watched them religiously when they first aired, or are newly discovering them, these are the best of the best from the decade that brought us Ross and Rachel and the Roswell High gang. Just please, remember to step away from the screen long enough for a bathroom break and snacks. I beg of you.

Charmed was part of the WB juggernaut for eight seasons, and it was a great departure from the sappy, happy teen shows surrounding it. It centered on three sisters who discover they have supernatural powers and find out just what it means to have a little black magic. It was darkly funny and sinister at times, but the dynamic of their relationships made it a gem. The show was never quite the same after Shannen Doherty departed after the third season, but it's still worth watching the entire way through.

2. Saved By The Bell

I'm biased towards SBTB because it's my all-time favorite TV show, but it's definitely the show to watch if you're looking for some cheesy fun. The entire show looks like the '90s threw up on it — from the clothes (acid washed jeans and pleated pants make an appearance in every episode) to the infamous Zack Morris cell phone — but it's flawless. It's the show I can (and do!) watch regularly over and over and never get sick of. Zack and Kelly forever!

OK, so this one is set in the 1970s, but it was filmed in the late '90s, so it counts! This one follows a bunch of kids surviving their teen years during the disco era, and it's a must-watch if only to see the adorable beginnings of Ashton Kutcher and Mila Kunis and their blossoming romance. Plus, it's funny as hell.

If you, like me, were a kid in the '90s, you're surely old enough now to appreciate the critically-acclaimed Frasier. All I knew about it back then was that it had the greatest theme song ever, but now I know why it's cemented in television history as one of the best comedies of all-time: the writing, cast, and plot lines were clever and somehow relatable. The only problem is, I still don't know what to do with those tossed salads and scrambled eggs... do you?

A show pulled from the air way before its time, Freaks and Geeks was only on for one season, making for a quick Netflix watch. But it's soooo good. Created by comedy geniuses Judd Apatow and Paul Feig, it's a great coming-of-age show for those of us in high school who were hardly cool or popular, just trying to figure life out. It also stars some of today's most well-known celebs, including a baby James Franco, Seth Rogen, Busy Philipps, Jason Segel, and Linda Cardellini. It's a cult classic for a reason — it'll hit you right in the feels.

Yep, before there was House of Cards, The Good Wife, Scandal, or even Veep, there was The West Wing. A true political drama in every sense of the word, this show first aired at the tail end of the '90s, during a pre-September 11 political climate, and the real-life war that occurred after the tragedy played a huge part in the plot of the show. It offered a great glimpse into life behind what we see when the president appears publicly, and it's a great watch for anyone, even if you're totally over hearing about the election.

If you preferred your teen TV to be a little bit darker than standard fare, Buffy was your girl. Sarah Michelle Gellar absolutely slayed (ha, see what I did there?) as Buffy Summers, the chosen one on a mission against vampires, demons, and other forces of darkness, one stake through the heart at a time. She had her group of friends, the Scooby gang, by her side as she tackled some pretty crazy creatures. It was campy at times (there was a musical episode before Glee ever existed!) and brooding at others, but it's '90s TV at its finest.

Hey, if you just devoted all that time to the romance between Buffy and Angel, how could you not seal the deal by binge-watching the spin-off to BTVS, Angel? Angel was on for five seasons, and some would say served as a predecessor to Twilight's Jacob and Edward. Except with much less sparkle (in a good way).

Could there be anything more perfect in the '90s than Friends? The answer is no. There are two kinds of people in the world: those who love Friends and those who are wrong. I'm mortified to admit I was in the latter category until a few years ago, when I caught a few reruns and realized how hilarious it actually is. Sure, some aspects are horribly dated now (notably: renting videos, answering machines, and the excitement of Baywatch reruns on TV) but the heart of Friends is pretty timeless. They're there for us, when the rain starts to pour (sorry, had to!).

The late '90s saw a surge of female-fronted comedies, and Ally McBeal was one of the best. It was a career breakthrough for Calista Flockhart as she played the titular young, single lawyer on the quest for career happiness and finding true love. Even though it ended in 2002, it's still easy to relate to for most millennials navigating the always-challenging dating game.

Arguably the most popular science fiction series of all time, you should watch The X Files especially now. Thanks to the upcoming reboot airing this January, our favorite FBI agents are even more popular than ever, and with good reason. Their on-screen chemistry was the stuff of legends back in the '90s, and fans are still not over it.

Sure, these days we have Fringe and Agents of Shield (and of course, the aforementioned reboot of The X Files), but the great thing about Roswell was that it was a sci-fi show for teens, so it had plenty of drama and juicy romance plot lines. It only aired for three seasons, but it's a fun watch for anyone into the supernatural.

Before he was starring as a hot shot lawyer on The Grinder, Fred Savage (aka Ben Savage of Boy Meets World's big brother) was charming us all as little Kevin Arnold on The Wonder Years. He was one of the cutest teen boys on TV, and the budding romance between Kevin and girl-next-door Winnie Cooper kept audiences hooked. It's a sweet coming-of-age tale set in the 1960s that will bring back fond (and hilariously awkward) memories of growing up, whether you're a millennial or a baby boomer.

Yeah, I know it's a cartoon, but hear me out: The Powerpuff Girls are fun, colorful, and seriously adorable. Plus, they're also kind of feminist icons, so you've gotta give them props for that. Watch one episode and you'll be hooked. Plus, it's always fun to pick a favorite — mine's Bubbles!

Before he was Charlotte's husband with a very, er, notable problem, Kyle MacLachlan played special agent Dale Cooper in this short-lived, but still great, crime show. MacLachlan's character heads to a small town called Twin Peaks to investigate the brutal murder of a high school student, and quickly realizes things aren't what they seem. Like all good '90s classics, this one is also being rebooted and will air on Showtime sometime in 2017, so you'd better watch the original in preparation and revisit the haunting, suspenseful show that your mom likely loved back in the day.

It's winter now, so while you're stuck inside, be sure to check out some (or all!) of these shows while you stay cozy.