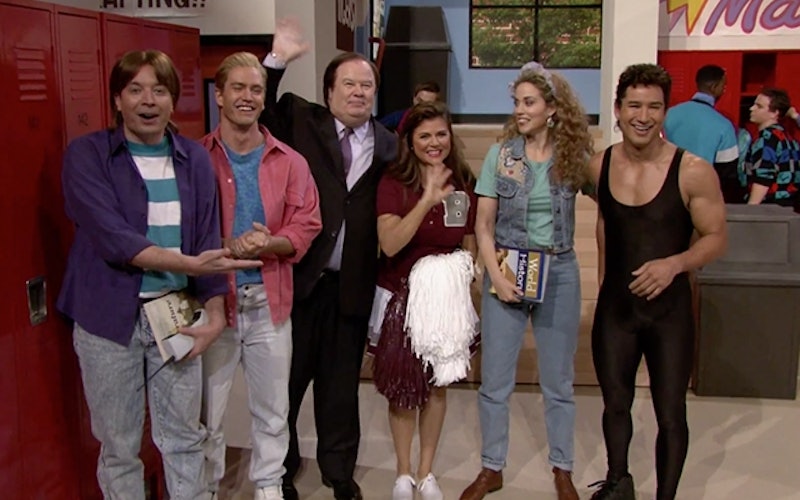 If I had a dollar for every time I used the phrase “the ‘90s are back” in an article I wrote in 2015, I’d have like.... 17 million dollars. Indeed, as 2015 draws to a close, everything old feels new again, with all of our childhood faves having sent us into the ultimate nostalgia spiral this year. And when you think about it, 2015 felt like the most ‘90s year ever... aside from, you know, all those years in the actual ‘90s.

But wait, haven’t we been saying this for every year since like, 2009? Haven’t the last five or so years just been a generalized platter the “'90s revival”? I mean, yes, and since I hopped on the grunge train back in like, 2006, it feels like it’s been going on a lot longer than that. Still, 2015 had some especially potent ‘90s moments, from music to TV to movies all vibing with a retro feel. And for your consideration, I rounded them up for you to survey and drift back to a simpler time.

So, here they are now:. Feast upon this wondrous platter of some of the most ‘90s moments in pop culture... from this year in the mid 2010s. Oh, it all hits me right in the childhood...

1. The Saved By The Bell Reunion

It was sans Lisa (sob) and sans Screech (whatever), but god, it was glorious. And if anyone could do it, it was Jimmy Fallon: the late night host put on a LOLz-worthy Saved By The Bell skit with your favorite Bayside High Schoolers, and we were all so excited.

Most of us will never forget where we were when it was announced Full House was getting a spin-off show — and on Netflix of all places! Which is great, because now you don't have to worry about buying a TV for your apartment.

Think this 1995 teen classic could ever age poorly? As if! The film may be two decades old, but Clueless fans were more fanatical than ever this year. Even now, Clueless is still a total Betty.

4. The Whispers Of A Backstreet Boys and Spice Girls Tour

It's not set in stone, but you know you'll empty your piggy bank if this one comes to pass.

5. And Hey, There Might Be A New Britney Spears Album

Not before the year is up, though, unless some kind of miracle happens. I'm stoked, nonetheless.

6. The Craft Is Getting A Reboot

That's right: This is happening, and it could be a fun shout out to all of us who were into the weird psuedo-goth stuff of the '90s. Shout out to my witches.

OK, you actually did buy a TV in order to catch all your favorite '90s cartoons in one place.

9. Alanis Morissette Popping Up Everywhere To Sing "You Oughta Know"

Mostly with Taylor Swift, sometimes with other people.

Really, guys, how crazy is it that it's 2015 and I can say there's a new Harry Potter story on the way?

11. All This, And Clarissa Darling Literally Explained The '90s

Seriously, we got Melissa Joan Hart to break down the '90s for you... because we love you that much.

How much more proof to you need? 2015 was delightful proof that the more things change, the more they stay the same. Thank God.