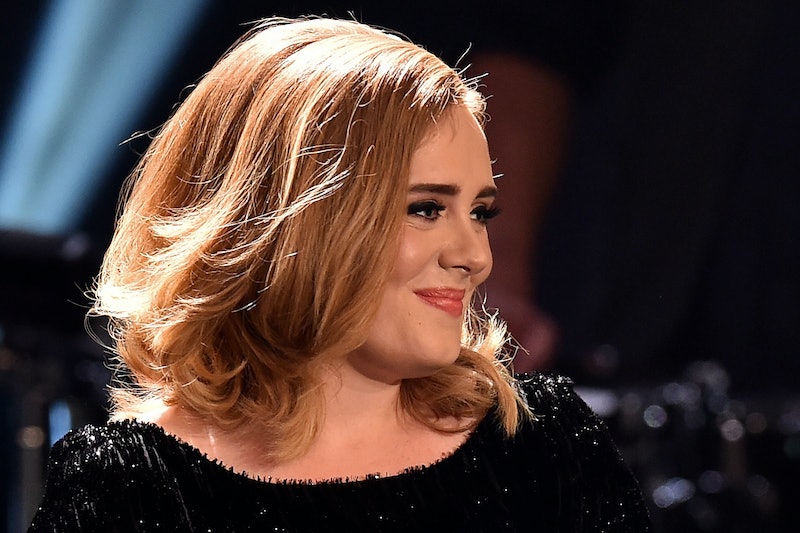 Like any year, 2015 was no stranger to celebrity scandals, heartbreak, and drama. On Wednesday, Google released their 2015 Year in Search lists, which show the topics that had highest spike in traffic over a sustained period in 2015 as compared to 2014. The Top Trending People (Not Including Deaths) list includes everything from musicians to athletes, and shows that these are the people who did something totally surprising this year. Which makes sense. While someone like Kim Kardashian or Taylor Swift is always popular, in order to be one of the Top Trending People, you have to have done something to make your popularity spike.

We were glued to the news when it broke that Lamar Odom had been rushed to the hospital; and we cheered when Caitlyn Jenner proved she's a force to be reckoned with in the transgender community after a stunning welcome to the world. We hit repeat many times when Adele's new single finally hit the airwaves; and we had the sudden urge to cut off all of our hair and finally get those tattoos we've always dreamed of when Orange Is the New Black's newest inmate, Ruby Rose, proved she's just as cool outside of Litchfield as she is behind bars.

2015 was filled with plenty of crazy moments and news makers, so without further ado, here are Google's Top Trending People of the year and the reasons they really made waves.

We've been Keeping Up with the Kardashians for 11 seasons now, but this year, we watched closely as Khloé Kardashian's estranged husband, former Lakers star Odom, was rushed to the hospital after he was found unresponsive at a Nevada brothel in October. Rumors of his struggles had run rampant for a long time, but it was horrible to watch as conflicting reports about what really happened to Odom began to surface. The two-time NBA champion has a long road to recovery, but he's got Khloé and her entire family by his side, and a legion of fans that are rooting for him.

Jenner is no stranger to the spotlight: first as the gold medal decathlon winner in the 1976 Olympics, and then as part of one of America's most famous reality TV families. But this year was different, as Jenner came out as transgender. The 66-year-old made a stunning debut to the world on the July cover of Vanity Fair, and has since made it her mission to change the way the transgender community is treated in the media and to promote a positive message of living life as one's true self, no matter what that means. It's a beautiful message, and her moment in the sun was such an important one this year.

From one strong female to another: Rousey showed everyone who's boss this year. Nearly every opponent she touches hits the ground pretty instantly, so fans were definitely shocked when she lost a match to Holly Holm in November. But she's proving that she's not just great at kicking butt in the ring — she had roles in Furious 7 and Entourage this year, and she wrote an autobiography that landed on the New York Times Bestseller list upon its release. She's also on a mission to change the way women athletes are perceived, and wants to pave the way for young girls with dreams of hitting the big time in sports.

Trump has always been a powerful media force, and this year, he put his money where his mouth is by officially announcing his candidacy in the Republican party for the 2016 presidential election. What was most surprising is that despite numerous controversies (both political and non-political in nature), he's shot to the top as the front-runner for his party. Sure, he may speak to shock value, but the world is listening.

Ruby Rose may be a new name to us Americans, but she's been a famous face down under since 2008. Primarily known as an Australian model and actress, she made her way stateside earlier this year when she shook things up between Piper and Alex on the third season of OITNB, and she's not going anywhere anytime soon. She'll be back for the show's fourth season, and has a slew of film roles on the horizon for 2016. Aside from her burgeoning movie and TV career, she spoke out in a poignant video about gender identity. She's definitely one to watch next year.

Depending on what era you grew up in, the name Charlie Sheen will conjure different memories. One generation will remember him as a wildly successful film actor from a famous family who then went on to star in Spin City, and millennials will know him as the star of Two and a Half Men with "tiger blood" running through his veins. Sheen has had plenty of well-documented highs and lows, and this year, he rocked the world with the announcement that he is living with HIV. He's become an unlikely health advocate, setting out to remove the stigma that comes from an HIV diagnosis, something that should be applauded and commended.

Williams was a successful anchor for 10 years on NBC Nightly News, winning a Peabody award for his coverage of Hurricane Katrina in 2005. He managed to escape controversy pretty easily until this year, when it surfaced that he lied about things that had happened to him when on location reporting the Iraq War in 2003. He was quickly reassigned to news coverage on MSNBC, NBC's partnered network, and became an Internet meme, with many mocking his credibility.

In one of the more head-scratching news stories of the year, Dolezal sparked controversy by the revelation that she lied about her racial identity. As the president of the Spokane, Wash. chapter of the NAACP, she lived identifying herself as a black woman, until her parents came forward and said that she was a white woman pretending to be black. She still stands by her statements and says on her website: "May each of you find the courage to embrace your full, unabridged identity in all of its complexity and beautiful expressions and proudly live your truth!"

Adele took a three-year hiatus from music to focus on raising her son, Angelo, with partner Simon Konecki. Her absence from music, however, was sorely missed, so when she released her first single in three years this past fall, it was a highly celebrated return. Her album 25 has broken all kinds of records, and in an age where people don't buy albums anymore, it's an exciting prospect. Hello, Adele, welcome back. You've been missed a lot.

Prior to this year, the Duggar family's biggest controversy centered on their conservative views on social issues. But the Josh Duggar turned that controversy on its head when he and his family released statements to People confirming reports that he molested multiple minor girls while he was also a minor. With that, the Duggar family's image as a wholesome family was brought into question, and their popular show 19 Kids and Counting was cancelled by TLC. Later in the year, Duggar's alleged use of Ashley Madison was reported in light of an online data breach, and he released a statement saying: "I have been the biggest hypocrite ever. While espousing faith and family values, I have secretly over the last several years been viewing pornography on the Internet and this became a secret addiction and I became unfaithful to my wife ... the last few years, while publicly stating I was fighting against immorality in our country I was hiding my own personal failures." He remains in a "long-term treatment center."

Though 2015 proved to be a crazy year for politics, pop culture, and activism, I can't wait to see what 2016 has in store.