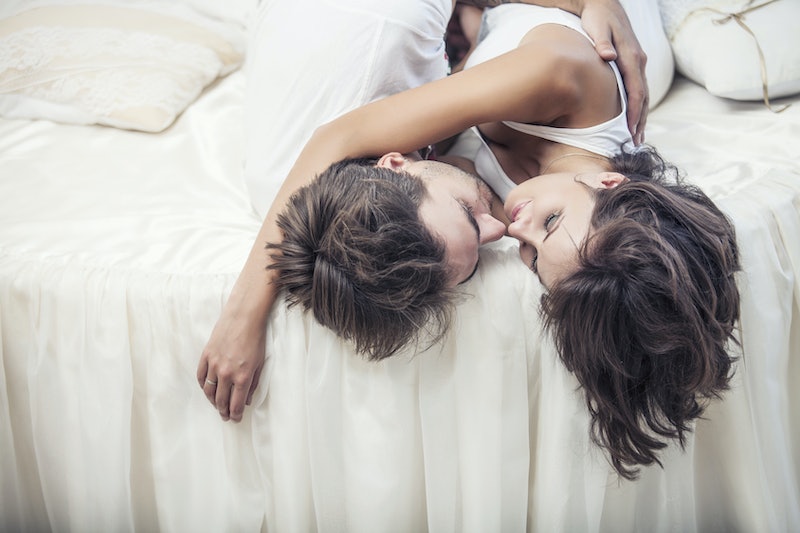 This time of year people have two things on their mind: holidays and sex. Since this is the case, the sex toy specialists at Adam & Eve, have compiled a Better Sex Guide to not only enhance your sexual practices this holiday, but give you some insight into who’s doing what and where and how. Because who isn't a Nosy Nancy when it comes to the sex lives of others?

Adam & Eve asked 1,000 people in the United States to fill out an online survey regarding their sexual habits during the season of merriment and cheer. What they found was sort of surprising: Some people are having way better sex and friskier sex during the Christmas holiday. It must be all the soft glow from the Christmas tree lights and the spiked egg nog that makes people want to rip each other’s clothes off and get down and dirty by the fire, or the TV Yule Log ― whatever provides more romance. Personal, I prefer the latter, but that’s just me, because who needs mistletoe when you have a Yule Log?

Because we all want to know what other people are doing in the bedroom, here are seven holiday sex stats that Adam & Even uncovered with their survey.

1. 34 Percent Of People Have 3x More Orgasms At Christmas

What?! Yes! According to the survey, 34 percent of people report having 3x more orgasms at Christmas than they usually have during other times of the year. See? It’s the damn Yule Long ― I just know it!

Well, if you’re having more orgasms, it only makes sense that you’d be having more sex to enjoy all those extra orgasms, right? Yes! In fact, 30 percent of those surveyed reported having sex 3x as much during the Christmas season.

3. For Less Than 50 Percent Of People, Sex Toy Use Remains The Same

Although more sex and orgasms are being had, for 47 percent of the participants, their sex toy use around Christmas stays about the same. What I deduce from this is that people may need to be giving more sex toys to their partners, so we can take this percentage up a few notches.

4. Most People Are Confident In Their Bedroom Skills

On a very refreshing note, 67 percent of those surveyed strongly feel that they make good lovers both during the holiday season and during the rest of the year, which, is great news! Having confidence in your sexual ability always makes for better lovers.

5. A Quarter Of People Add Sex Toys To Their Holiday Mix

Although 47 percent of people say they don’t use sex toys any more during the holidays than during the rest of the year, one in four couples do admit to turning to sex toys this time of year to, and I quote Adam & Even’s press release, “help jingle bells ring with their partner during Christmas.”

6. The Northeastern Part Of The Country Has The Best Lovers

When the survey was split up by parts of the country, they found that those in the Northeast, at 11.3 percent, claim that their partners are better lovers during Christmas. I’m betting that has something to do with the weather being so cold, but considering what’s going on this year, it may not ring true for 2015.

7. The Southeast May Have Some Work To Do

Coming in second, but well behind the Northeast, is the Midwest with 4.8 percent saying sex with their partners is better around the holidays, and only 4.1 percent of those surveyed in the Southeast can say the same. I guess the snow and cold plays in our favor for a change, huh, Northeasterners? That impending Polar Vortex doesn't seem so awful anymore.