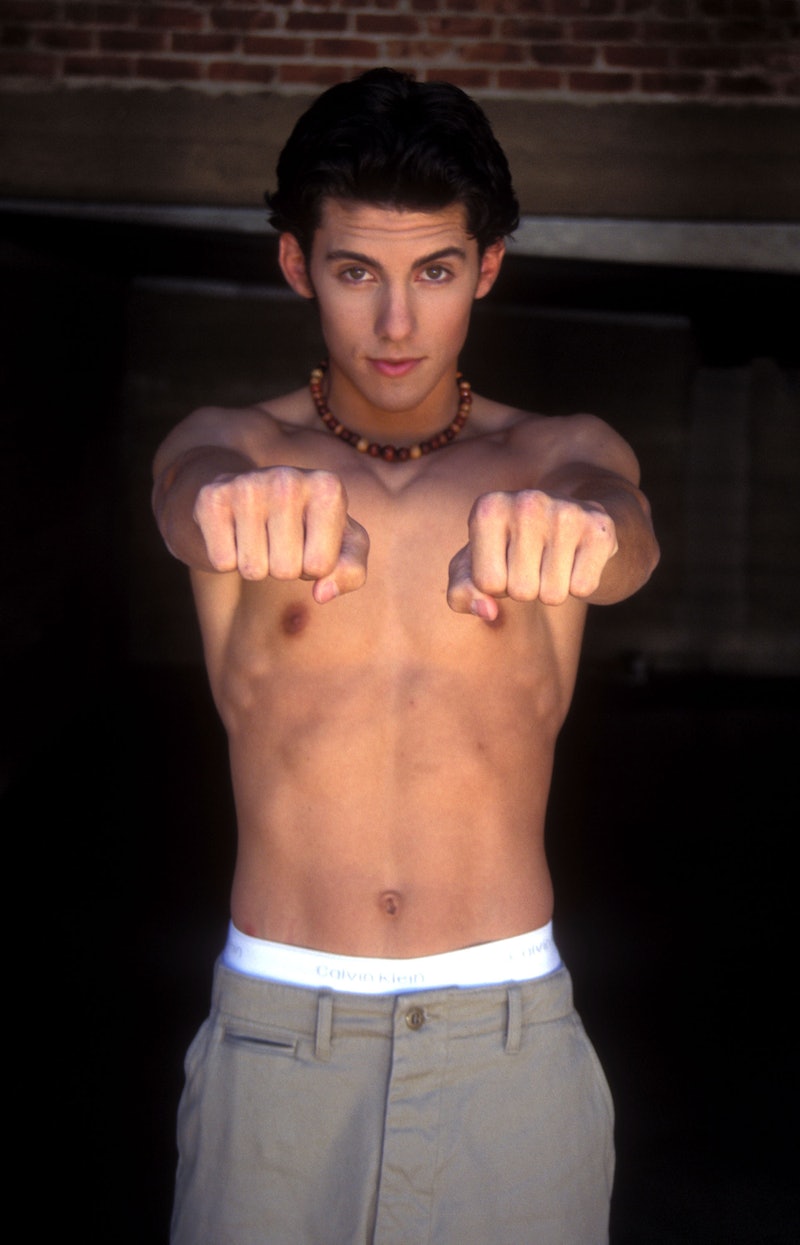 As a diehard Gilmore Girls fan, I've seen the entire series multiple times. Thanks to Netflix, it's a regular in my TV queue. Plus, with all the hype about a possible Gilmore Girls revival, I'm practically ready to hop in a car and drive to Stars Hollow myself. Like any fan of the show, I have strong opinions about Rory's love life. By that, I mean that I've always been adamantly Team Dean, because really, he was her first love and he built her a car. For most of my years as a fan, I denied even understanding the appeal of Jess.

Granted, when I rewatched the show after it appeared on Netflix, I had a newfound respect for Jess. He brings out Rory's adventurous side and really connects with her on an intellectual level, especially since they bond over a love of books. Still, I wasn't completely sold on being Team Jess — until I saw these vintage Milo Ventimiglia photos, that is.

Looking at the goofy poses and shirtless photos, I can't help but change my mind. Seriously, they're so amazing in all their early 2000s glory that I bet even those who are Team Logan will be persuaded. (Serious question: Is anyone actually Team Logan though?) Without further ado, here's a round-up of throwback Ventimiglia photos that will make any Gilmore Girls fan's heart skip a beat faster than you can say, "Copper boom!"

Honestly, what is this pose? From the shirtless-ness to the very '00s beaded necklace, I can't even deal. Sure, it's a bit ridiculous, but so great at the same time.

Between the pose and that face, he's like a human emoji here. You know, the one with its tongue sticking out sideways.

Clearly trying to show off his abs and Calvin Kleins, it's as if his eyes are saying, "Oops! Did I forget an undershirt?"

This pose is reminiscent of Mowgli in The Jungle Book.

This ensemble feels very Backstreet Boys chic. And I mean that in the best way possible.

As I look at this, Taylor Swift's "Out of the Woods" instantly comes to mind.

Dare I say his brows are on fleek? (Is this phrase still relevant? I know it wasn't even a thing back when this photo was taken.)

A true sign of their characters' chemistry? Ventimiglia and Alexis Bledel can goof off like this in real life.

Is this a superhero pose or the start of the "Macarena"? Not sure, but I still appreciate this photo's existence.

You know what this face says to me? It's basically Ventimiglia telling everybody, "Really?! Are you not convinced yet?"

That settles it, somebody get me a #TeamJess button ASAP.

More like this
This 'Gossip Girl' Wardrobe Error Has Gone Viral On TikTok
By Alyssa Lapid
Mel B Thinks These Celebs Should Play Them In A Spice Girls Movie
By Alyssa Lapid
Hilary Duff Is “Optimistic” About A 'Lizzie McGuire' Reboot
By Alyssa Lapid
'Friends' Star Maggie Wheeler Offers Support To Matthew Perry After Reading His Memoir
By Alyssa Lapid
Get Even More From Bustle — Sign Up For The Newsletter
From hair trends to relationship advice, our daily newsletter has everything you need to sound like a person who’s on TikTok, even if you aren’t.