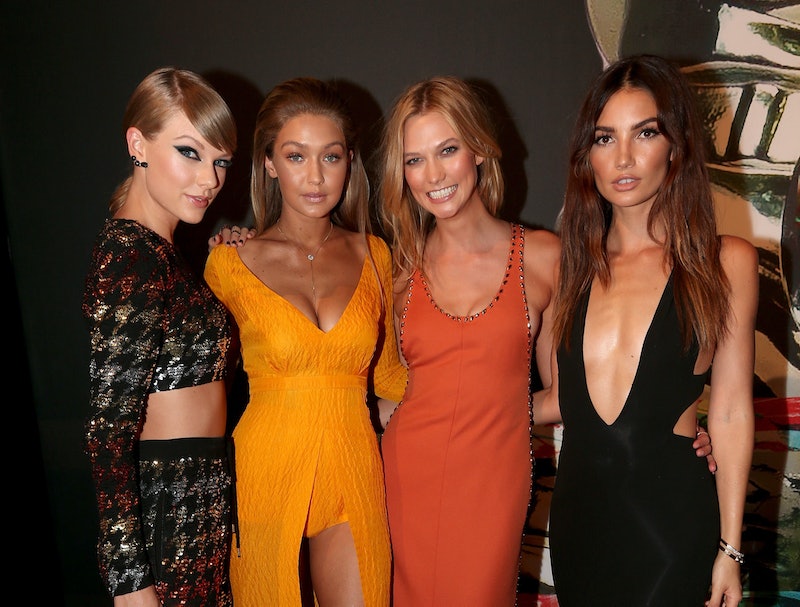 If there's one celebrity friendship that embodies that elementary school catchphrase "girls rule, boys drool," it's Taylor Swift and Gigi Hadid. It may sound silly, but hear me out. They've managed to not let the fact that they both dated the same guy influence their friendship. That's right, they each had a romantic past with Joe Jonas. Although just thinking about the potential awkwardness makes me cringe, it's not enough to stop these two. They're just as close now, despite the fact that Hadid is dating Zayn Malik, the ex-bandmate of Swift's ex-boyfriend Harry Styles. (Confusing, huh?) On Sunday night, Hadid and Swift proved just how close they still are when watching and singing along to Sunday night's Grease: Live. Pretty standard BFF behavior.

This got me thinking: How did Swift and Hadid meet anyway? If you've always wondered the same thing, I decided to dive a little deeper into this friendship. Because honestly, they've got to have more in common than a certain JoBro. Instead of being connected by who they've dated, Swift and Hadid's friendship actually appears to be rooted in some solid girl power. The first photographic evidence of them hanging out was when Swift photobombed Hadid and pal Karlie Kloss on the red carpet at a pre-Oscars party in March 2014. Swift and Kloss have been good friends for awhile now, tracing back to February 2012.

Although there's no concrete story of when exactly T. Swift and Hadid became besties, it may have all began with this very photobomb. From there, pictures together have solidified their friendship. In an interview with Elle Canada in September 2015, Hadid gushed over Swift and the rest of their squad. She told the magazine,

We want to be the generation and the group of friends known for supporting each other. "Squad Goals" is a big social-media thing right now, and that’s what we want to inspire in other groups of friends — to be proud of the power you all have when you’re together, which can be amplified so much by each person. That’s what has been cool about everyone’s willingness to be there for each other, and we don’t want to be like other generations who are infamous for their cattiness.

That's a mission I can get behind! Here's a round-up of highlights from Swift and Hadid's friendship, ever since that fateful photobomb in 2014. Because as these pictures prove, they put sisters before misters (and all those other sayings about female friendships trumping all).

She may have missed the dress code memo, but Swift still looks as classy as ever hanging with this group of supermodels last January.

Hadid joined Tay and the rest of the crew in the "Bad Blood" video. She played none other than Slay-Z.

Swift threw a baby shower for Jaime King last June. Hadid was in attendance, along with Sarah Hyland, Hailee Steinfeld, and the Haim sisters.

Those star-spangled onesies are everything. They also baked a flag cake together, of course. So festive!

During Swift's 1989 World Tour, Hadid strutted the catwalk on more than one occasion. She not only appeared at the show in New Jersey, but also London and Detroit. Their friendship went international.

Hadid was part of the epic girl group who joined Swift at last year's MTV Video Music Awards. They all were there, on behalf of their role in "Bad Blood."

When Hadid appeared on MasterChef in January 2016, she made sure to give a shoutout to Swift's stew. Not only is she a queen of baking, but it sounds like she's a serious cook too.

*There's no set date for this, since the timeframe is unclear. But based on the MasterChef appearance, the two ate stew together sometime before January.

It's impossible to watch Grease: Live and not burst into song. So it totally makes sense that these two posted a Snapchat of their viewing experience.

So there you have it! Swift and Hadid's friendship epitomizes girl power. And the fact that that likely were connected through pal Karlie Kloss just further solidifies this idea.