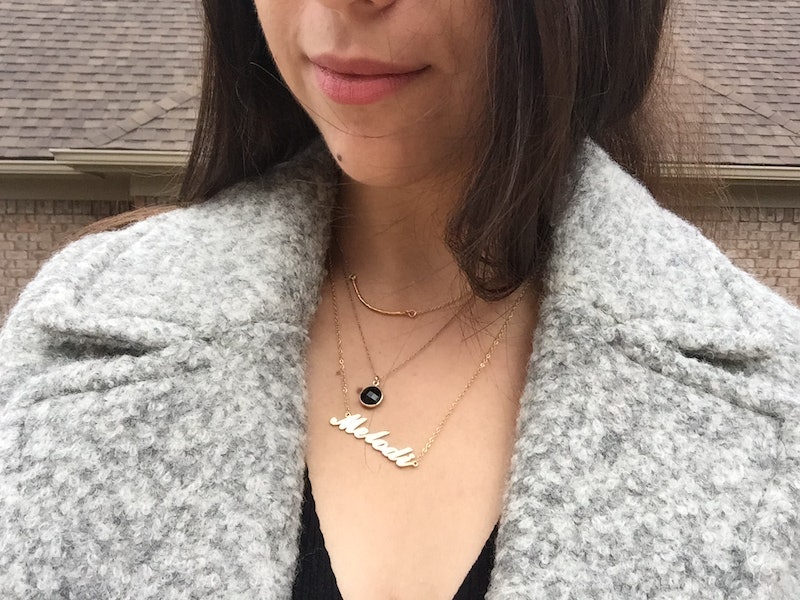 When it comes to TV shows, there is no cast that has been or ever will be as stylish as that of Sex And The City. And so I decided to dress like the Sex And The City characters for a week to see if their unique and fabulous styles could translate to an average human's daily life. The four ladies had killer sartorial prowess, but I was curious to see if vamping it up like Samantha or rocking a blazer á la Miranda would feel a bit ridiculous in my ordinary existence.

As a SATC super-fan, this is something I think of often when watching re-runs of the show. Carrie Bradshaw, Charlotte York, Miranda Hobbs, and Samantha Jones all had unique styles that everyone who loves the program can somehow relate to.

Sure, it's a shared sentiment that "the naked dress" Carrie wore on her first date with Big was gorgeous, while Charlotte's kitten-heeled boots were flawless. But the overall looks the women sported were, well, questionable for actual reality on a practical level. The majority of the ensembles were über-trendy, out-there, and occasionally insane (a yellow scrunchy tube top, Carrie? Really?).

So I dressed like Charlotte, Carrie, Samantha, and Miranda to find out just how much SATC style works IRL. Here's what happened.

Ahh, Charlotte York. The prim and proper debutante had the girliest, most traditionally feminine style of the group, which I predicted would be difficult to emulate what with my trend-based wardrobe. Picking out an outfit was certainly a challenge, but I ended up with a lace skirt over sheer pantyhose, a black blouse tucked in, kitten heels, and a cream clutch. And, of course, a pair of pearl earrings.

I didn't expect to feel so pretty and femme in this outfit, since I usually feel my best in ripped up T-shirts and leggings. I don't know if it was the kitten heels or the white lace, but the regal vibes were strong. I crossed my legs all day, and even remembered to powder my nose. Charlotte's upscale, formal style was getting to me. And I didn't mind at all.

I wore the outfit to my not-very-formal office on a Friday, which is typically the day everyone dresses down for the upcoming weekend. I did look dressed-up in comparison to my colleagues, but because I held my chin up and my back straight, I think I managed to pull it off anyway.

I would definitely say Charlotte's style was easy to pull off in real life, and I would even recommend it for more formal events or meetings. It may be a little too much effort for the everyday, but there's no denying it made me feel confident in my own skin.

The first things my bosses said when I walked in the door for work were things along the lines of, "Wow, you look nice! Where are you going tonight?" and, "Hot date?" I was pretty pleased that I had fooled them.

The same thing happened later in the day when I asked my friend if my outfit reminded her of an SATC character. She accurately guessed Samantha.

I was happy that folks noticed my best efforts at looking sexy and confident, but considering this outfit is something I would only wear to go out, I didn't feel particularly comfortable in it. Plus, I kept checking to make sure my bra wasn't showing through my blouse, which was a major nuisance.

Something tells me Samantha wouldn't care if her bra was revealed at work. She's basically just a badass, and her provoking, attractive style reflects that. But the story is a little different for me personally. Le sigh.

I was least worried about copying Miranda's style, so the day I channeled Ms. Hobbs turned out to be a pretty good one. Since Miranda's daily ensemble on the show mostly consisted of a suit or blazer, that's what I opted for.

Even though my office job's dress code is very relaxed as compared to Miranda's law office attire, I felt very empowered and confident walking in with a blazer and black slacks on. And with a collared shirt and some tasseled black loafers? I was convinced my take on Miranda was going to go swimmingly.

No surprise here: It went swimmingly. I felt confident yet comfortable in my pants and blazer. And even though it was on the formal side for my office, it didn't prompt any questions from my coworkers. In fact, I even got a few compliments on my blouse and pants combination.

With Charlotte and Miranda definitely having the more reality-appropriate wardrobes of the four characters, I was expecting more feedback about the looks being a little doldrum when emulating them (even if I can appreciate their formal clothes and feminine basics). But overall, it was a really great experience.

I left my personal favorite character for last: Carrie Bradshaw. Easily the most difficult character to recreate style-wise, due to her penchant for OTT styles and couture heels, Carrie could pull off anything and everything. Including a diamond-studded pair of underwear. Picking out clothes was more difficult than I imagined, but I erred on the side of trendy items with classic pieces mixed in, incorporating fun colors and a statement piece. That's basically what Carrie's outfits were always like: A whole lot going on, and everything somehow working together.

I threw on a purple, printed mini skirt with a black bodysuit and sheer black tights on underneath. I then added a gray coat with some dramatic heeled over-the-knee boots (which I'm convinced, if SATC were still taping, Carrie would wear), and finished the look off with a bold, red handbag that Bradshaw would rock as a statement piece.

And, of course, I wore a Carrie-inspired name necklace. Because is there any other way to live?

I would never wear this many loud pieces together, but I felt confident in the look since I was channeling one of my favorite fictional characters. That is, until I ran some errands and stuck out like a sore thumb. Running from shop to shop, I counted 18 long stares from the people around me. I secretly wanted to tell every one of them that they don't understand the essence of Carrie Bradshaw, but then I realized I was super dressed up for Wal-Mart.

I personally loved the outfit, but I have to admit it was a little over-the-top for your basic running-errands day. Maybe if I had worn the skirt and the boots separately, the story would have been different. But I can see why my take on Carrie may have prompted some odd glances at my local strip mall.

What Did The Babes Of SATC Teach Me?

All in all, recreating the amazing styles of the SATC cast in my everyday life was fascinating. I was doubtful that the unique, creative ensembles and out-there outfits would translate to a basic lifestyle. But as evidenced through my best attempts at Carrie, Samantha, Miranda, and Charlotte, I've come to the conclusion that their outfits, no matter how seemingly-unreasonable, are as feasible for reality as you'd like them to be.

Of course, the SATC outfits were sometimes too much when placed in real-life situations. I felt uncomfortable wearing a low-cut blouse at work like Samantha would, and I had to give myself a foot rub after wearing heels like Carrie's all day. Personally, I thought Miranda and Charlotte's styles were a little more realistic for my world.

Ultimately, this experiment made me realize something about the SATC characters' styles that I had never thought about before: Your personal style can be whatever you want it to be, so long as you feel comfortable, confident, and like yourself. Even if I won't revisit their looks for my everyday, this has taught me to appreciate expression and identity through all things sartorial.

And it's given me yet another reason to love SATC. Which, let's be real, there can never be enough of.

More like this
10 Times Haley Lu Richardson Dressed Just Like Portia
By Dominique Norman
15 Times Jenna Ortega Dressed Just Like Wednesday Addams
By Dominique Norman
Phoebe Dynevor Serves ‘Bridgerton’ Underboob In Stunning Floral Gown
By El Hunt
J.Lo's Micro-French Manicure Has A Fun, Sparkly Twist
By Olivia Rose Rushing
Get Even More From Bustle — Sign Up For The Newsletter
From hair trends to relationship advice, our daily newsletter has everything you need to sound like a person who’s on TikTok, even if you aren’t.