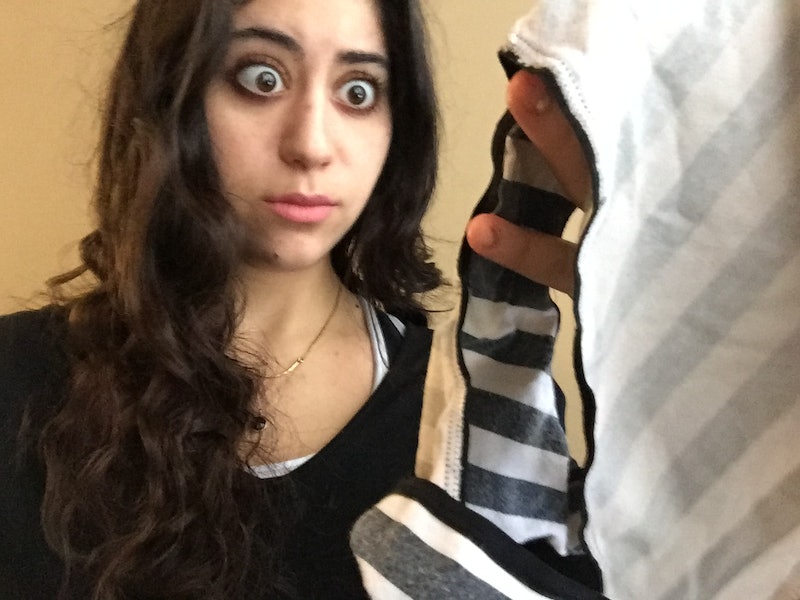 One of the worst things you could do to yourself when it comes to underwear is hold on to pairs that are disgusting, old, or just plain wrong. Those pairs of underwear that deserve to be thrown out immediately, or burned, and or even mutilated (pick your choice!), have been taking up space in your valued underpants drawer for way too long. Because frankly, life's too short to hold on to underwear you don't know why you're holding on to.

Underwear is a very personal matter. I'm a big believer that everyone has their own choice to whatever undergarments they want for whatever reasons. I don't want to be that person that tells you what to do, especially when it comes to a private thing like underpants, but the chances that you have some gross, horribly wrong undies in your underwear drawer are probably very high. Those panties that have a questionable, unwashable stain on them? That bra with the wire sticking out that could double as a weapon? That random pair of underwear you found in your dry cleaning that definitely doesn't belong to you? These are all underwear that need to go, ASAP

Here are 11 kinds of underwear that need to be thrown out without any questions or hesitations. From your beloved ex-boyfriends boxers to your weird training bra from middle school, you have my blessings to get rid of them all! And by blessings I mean demands. Seriously.

1. They Have A Terrible Smell

I don't need to describe it, because you probably already know that horrid, disgusting, totally abominable smell. If that's not reason enough to run to the trash holding that underwear as far away from you as possible, then by all means read on.

2. They're Stained Beyond Washing

And I mean, no bleach, detergent, or stain-remover could mess with a stain like that. Stains are not cute in general. You wouldn't wear a stained T-shirt all day would you? Just because your underpants are hidden from the world doesn't mean it's necessarily OK to wear stained undies. In fact, that's probably the last place you want a stain. Toss 'em!

Someone may think that one-inch hole on your left butt cheek on your favorite briefs is cute, redeeming, and adorable (ahem, it's you). But to me, that sounds like a pair of undies that needs to be gone, eradicated, and absolutely removed from your life.

You know the pair. They're too big, too bulky, and just don't work like you wished they did anymore. So bad, they'd make a better hat or rag.

5. They Hurt And/Or Are Uncomfortable

The pain of underwear that's squeezing you too tight or the agony you feel when wearing a bra that's wire is poking out is not fun. At all. Trust me, I've worn one too many tight briefs in my life to know! But just like with anything, if they hurt or are uncomfortable, no matter what you're doing in them, they're not worth holding on to. No one should have to wear painful and/or discomforting undergarments.

6. You've Had Them Since Middle School

I don't know if there's an exact lifetime for a pair of undergarments, but I know that middle school would definitely exceed it.

7. You Don't Know Where They Came From

If you have ever asked the question, "Oh, I wonder where these came from?" when looking through your underwear drawer, I send my condolences. Because unless you forgot about a pair of underwear you own, that's never a fun experience. If that does happen, though, there's no reason to hold on to those undies. Toss them and I promise you'll never look back.

8. Or They're Just Not Yours

There is really no reason for you to have someone else's underwear. I don't care if it's your sister's from when she stayed with you, your ex-boyfriend's boxers that have lingered around from your last relationship, or a complete stranger's you found in your laundry; the last place they belong is your personal underwear drawer. But also, no one wants to accidentally wear a stranger's underwear... I shudder at just the thought of it.

9. You Can't Remember The Last Time You Wore Them

You remember when you bought them, you recognize their pattern, you know they've been in your underwear drawer for at least the past two years, but you cannot, for the life of you, remember the last time you wore them. They clearly cannot be that important, so throw them out!

Years of wear will definitely turn a garment into something you don't recognize. If the fabric has faded on your undies, or the lace has nearly deteriorated on your bra, it's time to let them go. You obviously bought them because they were pretty and appealing, but after so many years of wear and tear you're probably better off shopping for new pairs.

And finally, if you find undergarments in your things that fit all of the characteristics above, what are you even doing?

Seriously, throw them out! Clean out your underwear drawer and I promise, you'll never look back at weird, gross, or questionable underwear ever again!