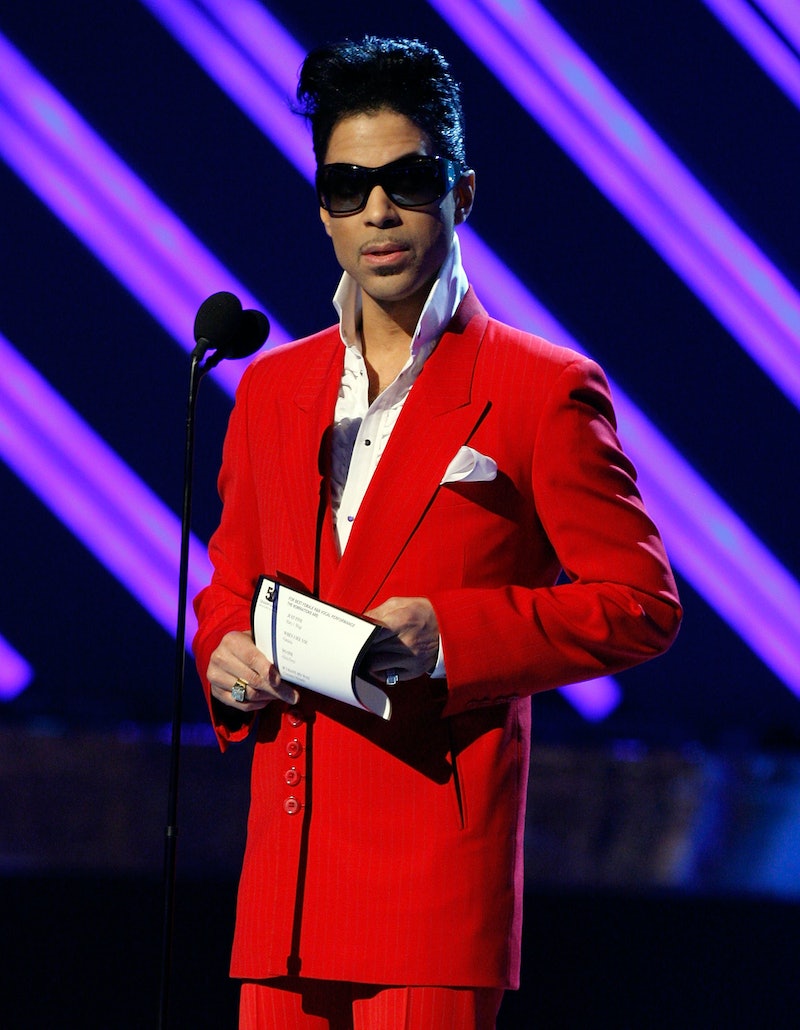 On Thursday, the entertainment industry changed forever. Music legend Prince died at age 57. His rep confirmed the news to Bustle in a statement, which reads, "It is with profound sadness that I am confirming that the legendary, iconic performer, Prince Rogers Nelson, has died at his Paisley Park residence this morning at the age of 57." According to the Carver County Sheriff's Office, the singer was found unresponsive in an elevator. This is undeniably a huge loss. While Prince is best remembered for Purple Rain and his sense of style, his feminism is also worth acknowledging. Whether he self-identified as a feminist is unclear, but his actions suggest he was a believer in equality and defying gender stereotypes.

I'd say that it doesn't necessarily matter whether he considered himself a feminist, if his actions created an impact that helped others better understand their own meaning of the phrase. Here's a look back at five ways Prince perpetuated feminism over the course of his career.

1. The Ending Of Purple Rain

On a blog called Pop Feminist (which ran from 2007-2009), the author vouched for why Purple Rain belongs in the feminist film cannon, writing, "Both the film and the album are unambiguously feminist." Throughout the essay, the writer raises great points about how although Prince's character, The Kid, first discredits the women in his life, he goes on to realize he can't succeed without them.

By the end of the film, he "has an epiphany through feminine art." Viewing the performance of the song "Purple Rain" as the movie's turning point, the author said,

The song is a release of sexual and jealous claims on women, instead urging a cleansing to take place in the “[P]urple [R]ain”, an experience offered from a man to a woman as a friend—an equal.

While this is merely one person's interpretation, I've got to say that it makes a lot of sense. Although some have noted that his character is sexist in the beginning, the ending of the movie certainly shows a change of heart.

Prince's style is another part of his legacy that people won't forget. He didn't shy away from sparkle, bright colors, or makeup. As Bustle's own Georgina Jones writes,

Following in the androgynous steps of Bowie, Lou Reed, and Iggy Pop, Prince showed us that playing with gender codes in fashion wasn't just a phase for him. Perhaps most importantly, Prince filled a space in androgyny that had previously been occupied predominantly with white people.

This in itself is significant. He didn't conform to any assigned gender roles and instead decided for himself what his style would be. Jones also pulls lyrics from Prince's song "I Would Die 4 U," which are beyond relevant: "I'm not a woman. I'm not a man. I am something that you will never understand." In lyrics like this, he refuses to fit into any box.

When it comes to his music, Prince is sex-positive and certainly doesn't shy away from the subject. On her list of "Six Sexy Feminist Reasons Why Sexy Feminists Should Love Sexy Prince," Rachel Masters writes on xoJane:

While most male artists today focus on this topic in excess, it’s not quite the same as how Prince approaches it. Prince was sex-positive before most of us had a word for it, and that scared a lot of prudes and proponents of puritanical rules about sexuality.

Several other fans have tweeted that Prince helped make them feel empowered, in terms of both sexuality and feminism. As mentioned earlier, whether or not Prince outwardly identified as a feminist, the fact that he helped others embrace their own feelings on the subject is just as important.

4. His Emphasis On Breaking The Rules

Sometimes, in order to get things done, it requires pushing the envelope and breaking the rules. I'm not saying you should go out and do something illegal, but I more so think this applies to social constructs, whether related to gender or beyond. Prince is widely quoted as saying, "A strong spirit transcends rules." This is a message that any feminist can relate to; it takes guts to fight social norms on behalf of what's right.

5. Encouraging People To Be True To Themselves

This inspiring Prince quote originally appeared in a Rolling Stone interview. I could be misreading his words, but I'd like to think this quote could be interpreted in two ways. First, he's saying that you don't have to let others define who you are — you can set the tone. You shouldn't let the opinions of others dictate your worth.

Another way you could read this statement is that it is up to you to decide how you treat others — since it says "who you are to other people." If going with that interpretation, it could mean that people should treat one another with respect and kindness. Honestly, no matter how you read this quote, it conveys the idea of being your true self.

Overall, Prince embodied several feminist ideals. The fact that he celebrated female sexuality and challenged masculinity only further adds to why he's a legend worth remembering.

More like this
Ed McVey Shares A Surprising Connection With Eddie Redmayne
By Catharina Cheung
Women Around The World Are Cutting Their Hair In Solidarity With Mahsa Amini
By Darshita Goyal
Chrissy Teigen Reveals Her Miscarriage Was An Abortion That Saved Her Life
By Radhika Menon
Everything To Know About Taylor Swift’s 10th Studio Album, 'Midnights'
By Grace Wehniainen and Jake Viswanath
Get Even More From Bustle — Sign Up For The Newsletter