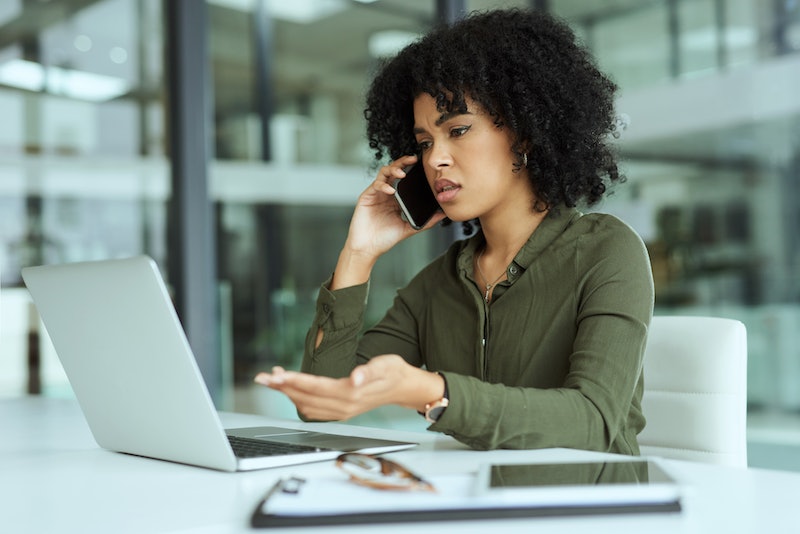 While feminism may be gaining more mainstream acceptance these days, that doesn't stop people from making a lot of anti-feminist comments — even in places like the workplace, where attacks on people's politics and personal beliefs are totally inappropriate. It can be difficult to know how to respond to anti-feminist comments at work because, unfortunately, calling out people's sexist comments can sometimes get us into more trouble than making them in the first places does. But there are tactful ways to do it that will get your point across without antagonizing your coworkers.

While it might seem unbelievable that people are saying anti-feminist things at work in 2016, I myself once experienced this — from a female boss. During lunch one day, she came up to me, said, "You're a feminist, right?" and proceeded to list all her grievances with the feminist movement, including, "I like a man who takes charge" and "Little kids need to have stay-at-home moms." I had no idea how to respond, so I just nodded and got on with my lunch.

It's not on us to make sure all our coworkers understand feminism, so it's OK if you'd prefer to stay out of these discussions altogether — especially if, like in my situation, you're dealing with a superior. But if you are in a position to say something, here are some ways to respond to anti-feminist comments at work.

It seems that whenever a woman says something to imply she is a human being who deserves the same treatment as men, she is classified with the label "feminist," and not in a good way.

Short answer: If somebody does this to you, you shouldn't feel pressure to hide your support for feminism, so there's no shame in answering, "Yes, I am." Maybe, by seeing that someone who is not a man-hating meanie can be a feminist, they'll stop it with their stereotyping. Because hey, guess what? Saying "I'm a feminist" is not the same thing as saying "I hate men."

It can sometimes be hard for privileged people to get that nobody's making anything about sexism or any form of oppression. So, if a woman tries to point out that her ideas aren't being heard, she's not getting paid as much, or she's being overlooked in the workplace, it's unfortunately common for people to accuse her of making the issue about gender.

Short answer: The thing is, the wage gap is about gender, along with a whole lot of other systemic inequalities. Being interrupted and overlooked are about these things, as well. There are studies to prove this. So, if somebody accuses you of making this all up, here are some facts: The wage gap exists even when you account for what professions people choose and how many hours they work. More women than men are being overlooked for promotions (at least among Millennials, according to Deloitte's Millennial Survey). And women are interrupted more than men, according to a study in Journal of Language and Social Psychology. Feminists are often considered "irrational," but what's really irrational is ignoring all these statistics.

3. "I Hear You're A Feminist. Here Are All The Reasons Why I Disagree With That Position."

This sounds like an absurd thing to say to someone, but it happened to me! Sometimes, people are looking to make conversation based on whatever they know about you, and they don't realize how they're coming off.

Short answer: If I were in this position again and felt comfortable responding, I'd probably say something like, "No shame in whatever you like, but I've seen people do relationships/families in all sorts of ways these days." Often, people's complaints about feminism stem from a fear that it threatens their own lifestyle, and by letting them know that feminism is about giving people options rather than prohibiting conventional behavior, they're less likely to be defensive.

4. "Whoa, You're Getting A Bit Argumentative."

"A few weeks ago at work, I spoke my mind and gave my opinion in a clear and no-bullshit way; no aggression, just blunt," Jennifer Lawrence recounted in a Lenny article. "The man I was working with (actually, he was working for me) said, 'Whoa! We're all on the same team here!' As if I was yelling at him." This experience is far from uncommon. According to the survey Elephant in the Valley , 84 percent of women in the tech industry have been called "too aggressive" at work.

Short answer: If you're being called aggressive for something a man would get away with, steer the attention away from your tone and back to whatever point you were making. You might try saying, "Oh, I think I was misunderstood. I wasn't expressing anger toward anyone — I was just saying that we would attract more customers at the conference if we had a demo." If you make it about something that matters to the company, it'll be hard for your coworkers to stay focused on your way of speaking.

The phenomenon of "mansplaining" is all too familiar to women in the workplace. In this setting, that often means women will be told how to do their jobs by men with less expertise than them.

Short answer: If somebody suggests that they know more than you do about how to do your job, try explaining to them why you've done things the way you have. If you've already tried things their way, explain why it didn't work. If you do things differently, explain how it has worked for you. That should drive the point home that you know what you're doing.

More like this
Sandra Bullock, Girlboss Extraordinaire
By Matt Harkins & Viviana Olen
The Most Common Traits Of A Taurus-Gemini Cusp
By Nina Kahn
Here's What The Face Emojis Actually Mean
By Bustle Editors
The 'Hocus Pocus' Sequel Finally Has A Release Date & It Makes Total Sense
By Shannon Barbour and Radhika Menon
Get Even More From Bustle — Sign Up For The Newsletter