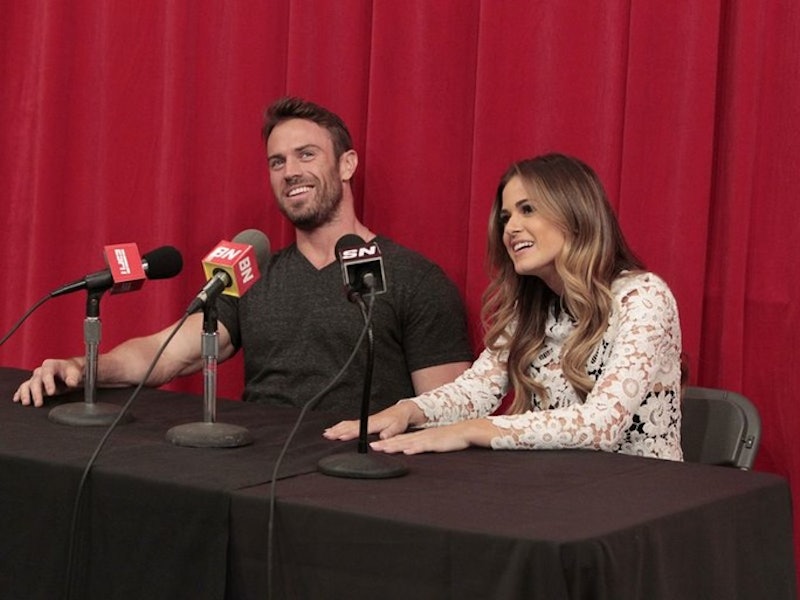 The premise of The Bachelor or Bachelorette is simple: Put a bunch of similar people in a house, give them all the same objective, and tell them all there can only be one winner. Sure, technically these shows are about love, but at the end of the day, it's all perfectly orchestrated for personal tension, fights, and TV-ready blow-ups. But in all the good, clean, dramatic fun, people can also get their feelings seriously hurt. And in worst case scenarios, the healthy competition can turn into full-blown bullying on The Bachelor or Bachelorette . The teasing isn’t gender-specific, so it's happened on both shows, and it’s something that I think will unfortunately continue for as long as the show does. I mean, remember these 12 The Bachelor contestants who were totally bullied?

Strangely, sometimes the series' biggest villains are often the ones that seem the most bullied — and their inclusion in this list are not at all a validation of their often cutthroat techniques, but in almost any situation, watching an entire house of people gang up on one person just to take them down feels unsettlingly like wide-scale bullying. Don't believe me? Let's revisit.

From the first moment Olivia appeared onscreen, fans all knew she'd be trouble. Immediately possessive of Ben despite his complete lack of reciprocation, it didn't take long at all for the majority of the contestants to turn on Olivia, and, in turn, one of the most infamous instances of bullying on The Bachelor continued. Olivia, who has since revealed she's dealt with bullying her whole life, was targeted by the women for everything from her toes to her breath (which they all insisted was less-than-fresh), turning this would-be villain into one of the most sympathetic contestants on the show. Especially after she got left on that island!

One of the most vibrant cast members of Season 20 who had serious chemistry with Ben Higgins prompted some peak mean girl antics from a group of women on the show who seemed to dislike her for no discernible reason. The girl could not catch a break and eventually left the show.

Never the most popular girl in the house and an outsider from the very beginning, she went through hell during her time trying to win Jake Pavelka's heart — especially afterwards when the two aired their relationship dirty laundry on live TV.

Look, I get it if Shea's not your cup of tea. But when you look back at the insults Courtney lobbed at her during her time on the show, it's hard to ignore the fact that she left the show with a wounded ego and more than one potentially negative rumor swirling around her. Poor thing!

Kaitlyn is unique. Besides being the coolest, most herself Bachelorette the series has maybe ever seen, her contact with bullying is different from the usual kind that we see on the show. Sex positive and open about her activity with Nick Viall outside of the Fantasy Suite, Kaitlyn was met with a firestorm of outrage and cyber-bullying towards Kaitlyn once the public was alerted of her apparent "rule breaking" with Viall. Gross.

6. Anyone In Michelle Money's Way, The Bachelor Season 15

We know now Michelle really hates the "villain" label, but what some might call sarcasm and dry wit often sounded a lot like mean remarks and borderline bullying to me.

Despite the fact that AshLee Frazier had to stand up against Tierra during her time on The Bachelor, she couldn't help but come down hard on Clare Crawley during their shared time on Bachelor in Paradise, slut-shaming her like nobody's business then hastily apologizing after being made aware that her iffy comments were caught on hidden camera. No one messes with Clare, AshLee! She's been through enough with Juan Pablo!

There's really no one worse in The Bachelorette history than Bentley Williams. You remember Bentley, right? The guy who showed up on Ashley's season only to decide he found her so unattractive that he'd rather "swim in pee" than marry her? Someone give this girl a hug.

Easily one of the most sickening moments I've ever had the misfortune to see during my time in the reality television pool was Erica Rose's egg incident on Bachelor Pad. Involving a nearly medieval egg-throwing contest that asked the men of the house to throw eggs at the women they were the least attracted to and wanted out of the house, the game resulted in nearly every egg hitting Erica, and her breaking down in tears in the process. Heartbreaking.

Moana, who was the ultimate runner-up of Season 8, was one of the earliest victims of Bachelor house gang mentality, with women like Tara and Susan taking dead aim on Moana, all because she failed to say that she loved Bachelor Travis Stork after just a few weeks of knowing him. News flash, all: Not having an immensely strong devotion to a guy you hardly know is very normal, indeed.

11. Anyone Chad Johnson Interacted With, The Bachelorette Season 12

Most people who had the guts to go up against Chad ran the risk of eliciting a very detailed, physical threat from him. Evan, Jordan, and Alex were easy targets for the threatening contestant who left freaked out and disgruntled contestants in his wake.

Stay with me here. Yes, Chad was out of line pretty much constantly. Yes, no one should threaten to hurt someone or put their hands on anyone regardless of the situation. But, when you look at it objectively, it's pretty easy to see the aggressive and relentless bullying that also came from people like Evan and Alex, contestants who seemed to forget about JoJo in favor of ganging up on Chad. Not cool.

More like this
This 'Bachelor' Contestant Had The Best Reaction To Wearing The Same Dress As Another Woman
By Grace Wehniainen
A Guide To All Of Zach Shallcross' 'Bachelor' Filming Locations
By Brad Witter
Brooklyn From 'The Bachelor' May Have Accidentally Predicted Her Time On The Show On IG
By Grace Wehniainen
'The Bachelor' 2023 Schedule Differs From Last Season In 1 Key Way
By Grace Wehniainen
Get Even More From Bustle — Sign Up For The Newsletter
From hair trends to relationship advice, our daily newsletter has everything you need to sound like a person who’s on TikTok, even if you aren’t.