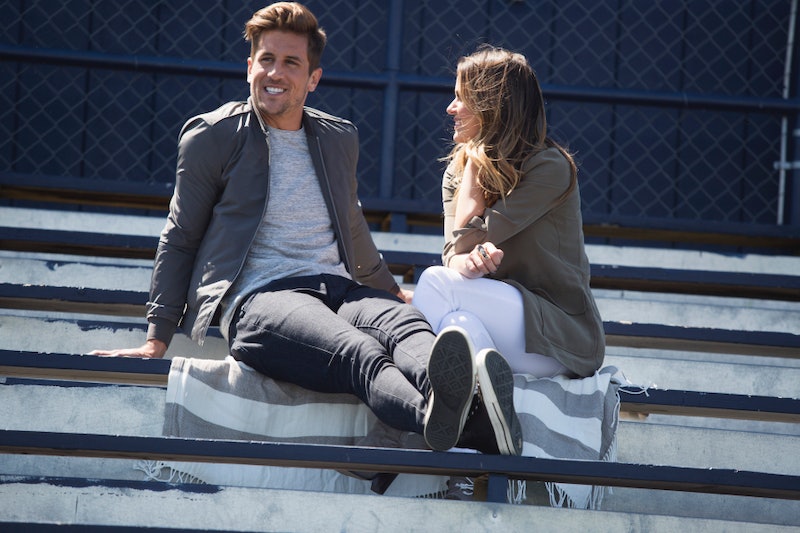 This season of The Bachelorette features an abundant amount of shadiness. Yet, weirdly enough, the suspect guys are the ones who JoJo Fletcher seems to be into the most. There has been a lot of drama this season, so it might be a little difficult to keep track of all the guys who were rumored to be shady on The Bachelorette — and that's where I come in.

I just want the best for JoJo (she's a friend in my head), which is why I am nervous based on this pool of guys. Yes, most of them are very good looking and charismatic, but there is just so much, alleged, shadiness. But you know what they say: where there's smoke, there's fire. So even if some of these rumors aren't exactly true, they aren't necessarily a great sign of things to come.

I could tell you right away that most of these guys were not "the one" for my girl JoJo, but I guess she had to find that out herself and go on this journey. Plus, the season would be really short if she just listened to me and eliminated all of the losers and sketchy guys right away. So yes, there were plenty of reasons to keep these men around.

Here's a rundown of all the shadiness we've gone through this time around.

Thankfully, JoJo got rid of Chad, who called her "naggy" and was way more into antagonizing the other guys than he was into getting to know JoJo. He would do anything possible to provoke these guys. After the show filmed, Chad hung out with Robby's ex-girlfriend and Grant's ex — what a weird coincidence (cue my eye roll). He also bought the domain names for fellow contestants like Robby, Alex, Grant, and even JoJo, so when people went to those websites (like, jojofletcher.com), it would redirect them back to Chad's Instagram. It looks like that ownership period was pretty limited though since the links don't work anymore. Sure, those last two things didn't happen on the show, but they definitely didn't make it seem like Chad was there solely to woo JoJo.

Robby's relationship timeline raised suspicions for JoJo. During the hometown dates episode, Robby's mom warned him about some rumors going around that he dumped his girlfriend just so he could be on the show. He was pretty appalled by the accusations, but the timing did raise questions. TV sleuth Reality Steve posted about this situation on his site several times — but beware if visiting his site. Spoilers abound. Steve alleged, "Robby is going to be an interesting one for the sole reason that, well, he had a girlfriend of 4 years named Hope Higginbotham that he broke up with in January. Here are some recent photos of them, with one of these being a trip to Italy for her birthday in November, then also them together in pajamas this past Christmas."

Then there's the guy who was rumored to be the most shady of all: Jordan. First off, his brother Aaron Rodger is a famous and successful NFL quarterback, so the fact that Jordan went on a reality TV dating show caused many to speculate that he was just trying capitalize on his famous sibling. Plus, there is a mysterious rift between Jordan and Aaron, which made fans wonder what really happened between them.

He is an ex-NFL player who wanted to be a sports broadcaster, and he did reportedly land a job as a sportscaster for the SEC Network while The Bachelorette was airing, so it's unsurprising then that people might think the show was an audition of sorts for that type of career.

On top of that, there was a rumor about Jordan cheating on his ex-girlfriend, but he denied this to JoJo on the show. Even with all this, Jordan is (obviously) the one who JoJo is into the most.

Yes, I know that The Bachelorette is edited and that almost anything can take on a negative spin in the tabloids, but it really seems like the shadier these dudes are, the more JoJo is into them. Can we just ask for a redo of this season? Who would't want to watch another season of JoJo?