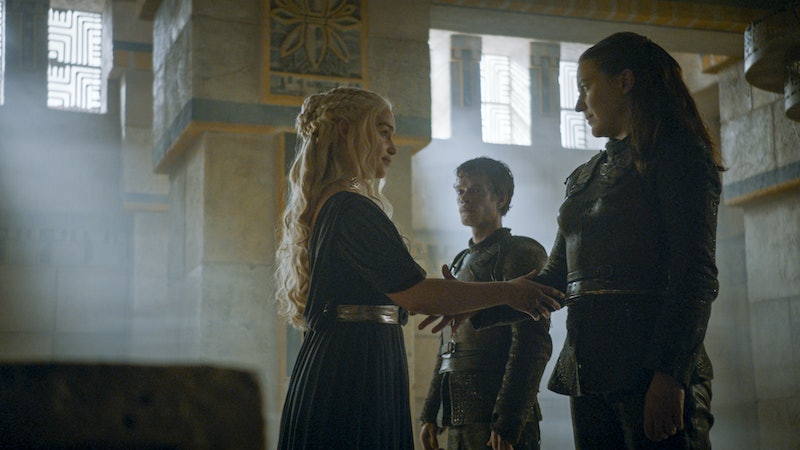 As we hurtle at full speed toward the Game of Thrones Season 7 premiere, it's safe to say that, by now, there are a ton of things that could happen to each character. For every metric ton of possibility, there are two tons of things that aren't going to fly. While GoT is approaching an inevitable crazy penultimate season, we can expect to see many of the character arcs beginning their descent towards the final curtain call. As such, it should be noted that a descent doesn't necessarily mean the ride won't be bumpy. In a show that prides itself on unexpected murders, romances, and wars getting waged, I have no doubt that the GoT writers are still going to lob narrative curveballs our way. But, considering all the wild possibilities, there are some major things that simply can't happen at this point.

Whether we've confirmed a theory that rules out another theory, a character has made a different choice, or there is simply no logical way an event could happen, GoT is setting us up for heartbreak no matter what. I know we've all spent literal years contemplating every look, word, and action from every major character in GoT, questioning what it all means. There's merit in that kind of curiosity, to be sure. But here are some things I have total confidence won't be happening in GoT's seventh season.

I know we all saw some sparks fly when Dany and Yara met for the first time in Season 6. The chemistry was pretty palpable, yet I have a feeling the only time these two babes will be getting busy is when they're fighting side-by-side on the battlefield. You can't deny, though, that they'd make one hell of a power couple.

I think we have to all face the sad truth that Catelyn Stark is well and truly dead. We will not see her again, zombie or not. While Arya may be taking up the mantle of Lady Stoneheart in practice, the canon version of her will probably not be happening any time soon.

3. And While We're At It, Lord Stoneheart Won't Happen Either

Similarly, we should all start processing our grief now that Robb is gone forever and everything sucks. The most bae Stark is chilling with the rest of his ancestors in spirit form in Winterfell, which is how it should be. Lord Stoneheart isn't happening, and we're all a little worse for the wear because of it. C'est la vie.

4. Arya & The Waif Are Not The Same Person

I love a good Fight Club reference as much as the next person, by Arya is no Tyler Durden. Theories percolated midway through Season 6 that Arya and The Waif were in fact one and the same. I'm not buying it, y'all. Not only did Arya literally kill The Waif without losing any sense of herself that might come with dissociation, she escaped Braavos, proving she wasn't in a mental prison of her own making.

5. Khal Drogo Coming Back From The Dead

I love Khal Drogo as much as the next GoT fan, but I think it's safe to say there's only room for one resurrected character in this show. While Khal Drogo was a sincerely great partner for Daenerys, boosting her confidence and helping her blossom into the strong woman she is today, there's no way we're seeing him anywhere except the House of the Undying any time soon.

Daernerys straight-up denied Daario in the Season 6 finale. It was such a cold moment to watch: Dany giving him the read receipts, and Daario slowly realizing he was going to lose the woman he truly loved. While Daario may pop up in Westeros, chances are slim that he would ever get close enough to Daenerys to try and woo her once more.

7. Littlefinger Taking The Iron Throne For Himself

All that scheming and dreaming is fun to watch, but Littlefinger's chances of getting to sit on the Iron Throne are so slim. Sure, death and destruction will inevitably rule Westeros once Daenerys touches down, but there would still need to be a ton of major character deaths for Littlefinger to even be considered as a ruler. Sorry, bro.

8. Brienne & Jamie Riding Off In The Sunset Together

I know, I know. You 'ship Brienne and Jamie. They've got great chemistry. They understand one another. They're practically cut from the same cloth. But Brienne is currently sailing down a river, and Jamie is about 10 seconds away from possibly murdering his sister. Who knows if they'll ever cross paths again.

He's been rowing a long time, folks. He may have been claimed by the Seven Gods for all we know. Peace out, Gendry.

10. Azor Ahai May Not Happen

We have yet to confirm whether Jon Snow will become Azor Ahai incarnate, but, with Melisandre banished from Jon's sight, there's no way of knowing if this will actually happen. But just having Jon back in our lives is blessing enough, right?

11. We May Never Know What Happens To Jorah Mormont

Already on the highway to the friendzone, poor Jorah is literally battling for his life thanks to a sweet greyscale infection. He's been commissioned by Daenerys to go find a cure; he doesn't even know she's set sail from Essos, poor guy. He'll probably return to the Bay of Dragons and dissolve into a pile of sadness because Daenerys has left him alone for good.

While previous Hands of the King — one a Stark, one a Tyrell — have not exactly died of natural causes, there is no reason we need to worry about Tyrion. Not only is he the Hand of Daenerys (who seems to be totally ride-or-die for Tyrion), but he's an intrepid dude. Tyrion has been through worse in previous seasons, so he's ready for whatever battles he might face in the upcoming season.

13. Bran May Not Be Safe If He Brings Down The Wall

Bran may end up unleashing a whole mess of awful if and when he does bring down the Wall. While he risks succumbing to the White Walker's curse after being touched — a particularly nasty end for this Stark — Bran is also inadvertently unleashing pure mayhem on the rest of Westeros should he somehow bring the Wall down. If he does it, he'll have a big target on his back.

So, rest easy, GoT fans. Or take to the streets in protest. Either way, all these things are unlikely to come to pass when the next season of Game of Thrones rolls around.