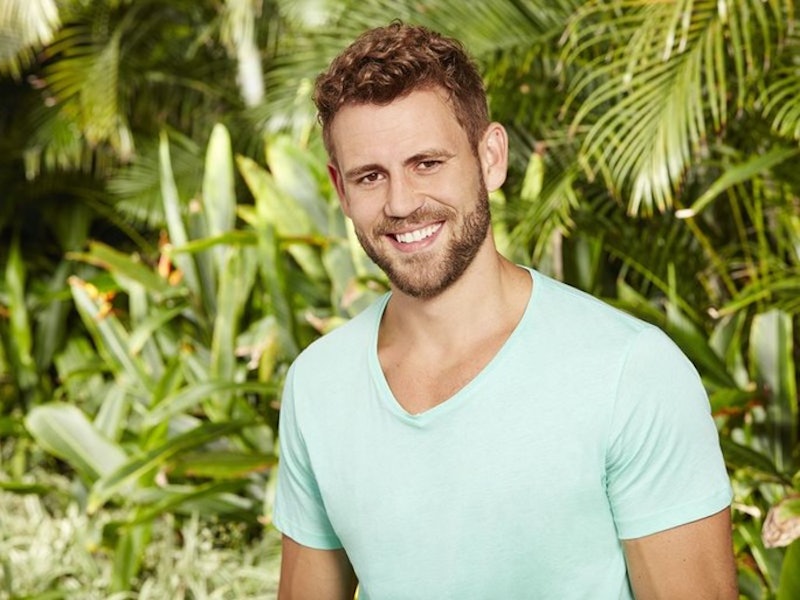 I am a 25-year-old woman living in a world where I am lucky enough not to feel pressure to get married anytime soon — not from my parents, not from my peers, and not even really by society. Unsurprisingly, Millennials are getting married later in life than any generation that came before us (that is, if we bother getting married at all). The times I have ever felt jarred in my 20s by the pressure to get married are few and far between, but the most notable times were while watching the way the idea of marriage was discussed during runs of The Bachelor and The Bachelorette — which is exactly why Nick Viall's run as the next Bachelor is such a relief to me as a twentysomething woman.

If you've been intermittently tuning out of Bachelor Nation for as long as I have, then maybe you too experienced the same shift that I did. I woke up one day and the women competing on the show weren't grownups with awesome hair that seemed to be in some very distant place from me; they were my peers. In some cases, they're a few years younger than I am ('sup, Hailey and Emily). And with every season, it seems that the contestants — particularly the female contestants — are younger and younger. Fresh out of college. Barely of legal drinking age. Certainly not an age that I would ever feel comfortable pressuring someone to get engaged — and yet the end goal of the show has, over time, remained exactly the same.

This shift is compounded by the fact that, traditionally, female contestants are younger than the male ones (average age of 26 versus 29), as are the Bachelorettes versus the Bachelors (average age of 27 versus 31). But let's disregard the stats for a moment, because the actual ages of these contestants is, of course, not a testament to their maturity or how serious they are about love. What jars me is not necessarily their ages, but instances like Tuesday night's after show, when unaired footage from Bachelor in Paradise showed a 24-year-old Caila Quinn crying and seeming to talk about herself as being broken in some way for not finding love; instances like 23-year-old Hailey and Emily breaking down before leaving because they hadn't found it either; and an entire season of JoJo Fletcher, a woman my own age, feeling pressure to be engaged at the end of her season from all sides, despite the fact that the man she chose clearly (and reasonably) wasn't ready for that kind of commitment.

I'm not at all questioning the maturity or the validity of the feelings of these women, nor am I questioning anybody's decision to marry young. But at the same time, it worries me that while I am happily existing out in the real world, which is largely supportive of women waiting for marriage or forgoing it altogether, there still exists this micro-universe in my television where women — very young women — are made to feel heartbroken about not finding love or being engaged at an age where they have a ridiculous amount of life ahead of them. The idea of it seems to perpetuate the notion that women are subject to time tables that men aren't, that there's an expiration date on our desirability or ability to find love that doesn't apply to them, and the idea of it isn't just disheartening for these women, but for all the women watching as well.

Enter Nick Viall, who is one of the older Bachelors we've seen in a long time. This September, he'll be 36, which is certainly an outlier on the typical age we see for any of the contestants and Bachelors. What I'm hoping this means is that, in keeping with the show's tendencies to cast contestants younger than the Bachelor, this might be an opportunity to take the heat off of young twentysomething women. I'm looking forward to a season that will hopefully bring on older female contestants, a season with a lead who has been open about his desire to take his time to find the right person rather than giving into the YIKES level of pressure that the franchise seems to inflict on its contestants. I'm looking forward to a season where we will get to see single thirtysomething women who are settled in their identities and established in a way that, try as we twentysomethings may, many of us just plain aren't yet; to a season that reflects the very normal situation of being single in your 30s, as typically a lot of women are.

There are a lot of reasons to get pumped about Nick Viall being the next Bach. He's funny AF, refreshingly candid, and falls for women who are strong, witty, and confident in themselves. I'm excited for a season where I feel at least slightly less like I am compromising my feminist values by actively rooting for women to find love with a man on a reality show, and a season where I am guaranteed a few laugh out loud moments per episode. But more than any of that, I'm looking forward to seeing a reflection of love on my television that I see more often in real life — women who aren't necessarily in a rush to get married, who have been comfortable with the idea of being single, and will give the show less of an opportunity to put a weight on the idea of marriage as other seasons certainly have. Casting Nick Viall as the Bach might be the step necessary in setting the tone for a show where the focus is less on getting married by a certain age, but rather on finding someone you have a meaningful connection with, and seeing where it goes from there — in other words, more like actual reality than this reality show has ever been.