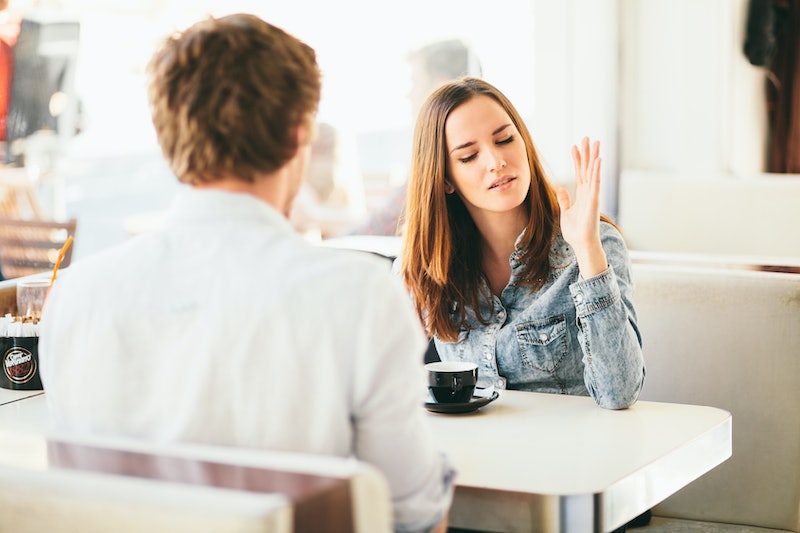 Ask most men, and they'll probably tell you they strive to include everyone in their conversations. But ask most women and gender-nonconforming people, and they'll probably tell you that at some point or another, they've been excluded, usually by a cisgender man. That's because there are ways men exclude women from conversations without knowing it or even intending to.

This is not meant to be an indictment on men. I don't hold it against people for behaving the way they have been socialized to behave, and I do completely believe that these behaviors are unintentional. They're typically a result of unconscious biases that lead us to stereotype people without thinking rather than conscious beliefs about male superiority.

But the fact that they're unintentional doesn't make them excusable. Ultimately, acknowledging the lived experience of marginalized people is more important than protecting the egos of privileged people. So, men (as well as white people, straight people, and other privileged people) need to accept that they could very well be guilty of these behaviors and work to change them. If they don't, we'll keep living in a world where some peoples' opinions and experiences are valued less than others.

Here are a few ways that men unintentionally exclude women from conversations both at work and in social situations.

"Mansplaining" is a term to describe the act of explaining something to a woman that she already knows. While there's nothing wrong with helping someone understand a concept, acting like an authority can undermine the other person's intelligence, and when it's done by a man to a woman, it contributes to the broader undermining of women's intelligence that takes place all the time.

In case the presidential debate didn't convince you, it's a proven fact that women are more likely to be interrupted than men. One famous University of California-Santa Barbara study found that, in mixed-gender conversations, men accounted for 47 out of 48 interruptions. Another more recent one from George Washington University showed that both men and women interrupted women more.

One dangerous way the experiences of women and other oppressed groups are regularly dismissed is through gaslighting — telling people they are not really experiencing what they're experiencing. Men are often guilty of gaslighting women about sexism because it's easy to believe that if you haven't experienced or noticed something yourself, it's not real. Of course, though, that's how sexism works: Men often don't notice it because they're not usually on the receiving end.

Sometimes, without realizing it, men discourage women from joining conversations by talking about things they don't relate to. There's nothing inherently male about sports, for example, but we live in a world where men and women are socialized differently, which means that sports analogies can be alienating to women and to men who don't conform to their gender role, as can language that objectifies women (which shouldn't be used anyway for so many reasons).

Many women could tell you of a time when they made a suggestion and had it ignored, and then a man said the same thing and it was praised. While this may be harder to quantify than the others, it is something to look out for: Make sure you're taking everyone's opinion just as seriously, because our unconscious biases often lead us to do otherwise, and it takes active awareness to challenge them.