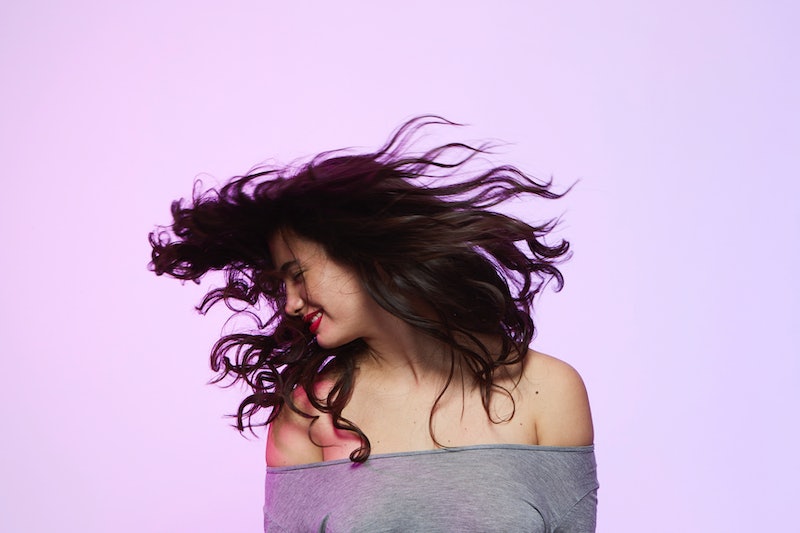 If you're the type of person who enjoys making New Year's resolutions (no shame if not!), I'm sure that you — like me — likely have a few small resolutions that you make every year, only to fail to do them. So, why not make 2017 the year you focus your energy on a few of those fun, small New Year's resolutions and finally complete them, for real? I mean, 2016 was hard enough — it's time you gave yourself a little break doing something fun.

Every new year, people commit themselves to changing their lives in big and inspiring ways. Some strive to live healthier, while others try and better their minds with reading goals and education plans. In 2015, I made it my resolution to say one nice thing to someone every day, and like most New Year's resolutions, it turned out to be harder than I thought. That's why for 2017, alongside my more serious resolution to smash the patriarchy and chill, I decided pick one thing I know I can accomplish in a year, and make it my New Year's resolution. Something fun I've always wanted to do but haven't had the time to, something that doesn't carry with it the pressure of lofty goal setting. Something fun and lighthearted to help me kick of the new year in a better, brighter way than the last.

In case you share my sentiments, here are a few fun, common New Year's resolutions, and some suggestions on how you can actually accomplish them. Good luck, and may your 2017 be infinitely better than the crap-shoot nightmare that was 2016.

It's possible that The Wire is of the many critically acclaimed shows you've always meant to start but haven't gotten around to watching — so make this year the year that you finally get around to checking it out. How will you get through all five seasons of what is heralded as one of the best drama series of all times? You know how: marathoning, of course.

Each month for the foreseeable future, set aside one weekend to plow through 10 episodes of the series, and by the end of the year, you will know all about Lance Reddick, Omar Little, and the rest of the unforgettable characters of the show you've waited way to long to watch.

One of the number one books people claim to have read but never actually have, 2017 is the perfect year to finally crack open your copy of David Foster Wallace's masterpiece, Infinite Jest . At a lofty 1,079 pages, you may think it impossible to get through — but in 2017, you can do anything you put your mind to, including this. How will you manage? If you read an average of three pages every day, something you can do while you drink your morning coffee or as part of your bedtime routine, you'll finish the book before next New Year.

Still don't think you can do it? Try listening on audio! And, if that fails, just watch End of the Tour . You tried, at least.

If we're getting technical here, George R. R. Martin's book series is actually called A Song of Ice and Fire, not Game of Thrones like the series title, which you will soon learn as you embark on a journey to read the amazing fantasy novels your favorite HBO show is based off of. So far, Martin has released five of the seven books in the series, which means you have a lot to get through in a year — but don't worry, I know exactly how to do it: build in a reward system.

While you're anxiously awaiting the late release of 2017's seventh season of Game of Thrones, start reading the original book series. Every time you get to the end of a book, reward yourself by allowing yourself to binge the corresponding season. Your desire to watch it all unfold on screen again will push you through each book.

You've tried for years, but you've never quite been able to perfect the illusive makeup technique — that is, until 2017 when you finally learn how to do the perfect cat eye.

There are a million ways to try and figure this out, but if you are looking for a full-proof method every time, I recommend using tape to create the perfect cat eye look. It may not make your hand less shaky, but it will help you get flawless results every time.

In a world that is overloaded with information, you wouldn't think a resolution like staying informed would be that difficult — but you'd be wrong. Keeping up with the world news is harder than you might think. The world is, after all, a great big place, so where can one ever start? Read the newspaper every day like Rory Gilmore? Don't worry, there's an easier way.

Subscribe your email to a newsy website that sends daily round-ups of the world's most important news. Among my personal favorites are The Skimm, The Daily Beast Cheat Sheet, and Bustle's very own The Bustle Huddle (which you can't subscribe to, but you can find online daily during the week).

OK, so you might not be selected by Andy Cohen himself to star in a new Real Housewives spin-off, but that doesn't mean you can't accomplish this very millennial resolution this year. Thanks to sites like YouTube, and even Facebook's Facebook Live feature, your dreams of become the next reality TV star can finally become a reality. To accomplish this goal, simply start utilizing the tools you already have and revel in the fact that your old high school classmates and exes are probably sitting at home on their computer watching your live updates from your Target shopping trip. Hey, every celebrity needs a place to start, right?

This is a goal I have dreamed about ever since I got my very first Lip Smackers Lip Balm and lost it within a week. Finishing an entire lip balm is a funny and easy resolution you can accomplish this year — if you believe in yourself. How, you ask, when you're constantly leaving it to explode in the bottom of your purse or go through the wash in your pants pocket? By leaving it in once place and never taking it out of the house.

To get through an entire stick of lip balm before losing it, you're going to want to pick a secure location to store it in — your medicine cabinet, make up storage area, or night table — and leave it there except for the few seconds it takes to apply every day. Keep a back-up lip balm to take with you out of the house, but keep this one in the same place until it's empty. You'll never lose it.

Avoid the embarrassment this year by making it your resolution to break the habit. How will you do it? The easiest way to avoid it is by setting restrictions on your phone — a feature most smartphones already have — or by downloading an app that will help you not text and drink. No one ever said you had to complete a resolution without a little tech support.

Set a lock on your phone that prevents you from opening it when you're intoxicated, and move on with your night. You'll be happier for it, trust me.

An seemingly impossible feat — or, is it? Make 2017 the year you finally keep track of your bobby pins. You aren't going to do it alone, though: you're going to use magnetic tape. Insert a strip on the inside of your bathroom drawer to store them on, or keep a little handy in your purse to help you find rogue pins on the bottom of your bag. Easy!

Everyone who has ever worked in an office or with a compute can admit to abusing their access to the internet, mainly in the form of mindless social media scrolling. While there are many ways to put a stop to your social media addiction, the easiest way is by restricting your access to it. With the help of Chrome's StayFocused plugin and others like it, you can set time limits on how long you're allowed on social media during the work day, and the app will block the site entirely after you've hit your daily limit. If you don't have the power to stay away, the internet will force you to stay away.