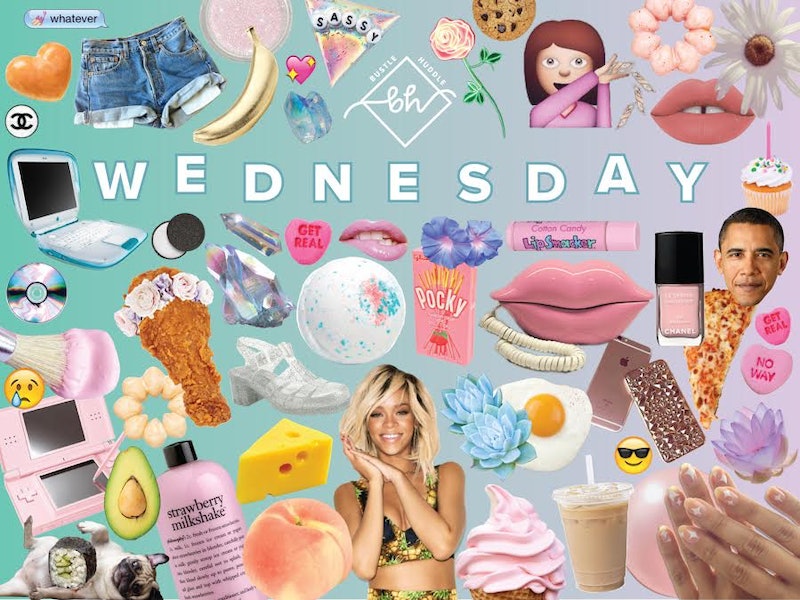 Happy hump day, y'all. Wednesdays are always a rough time, and when it's freezing outside and dark at 4 p.m., the days can feel like an eternity. But you've made it through, and tomorrow is Thursday, which is basically the start of the weekend (right? Right.). So get your celebrations in order, because you're this close to making it to the finish line of this week. Woo!

And what a week it's been already. From Donald Trump getting the title of TIME magazine's Person of the Year to the contestants for Nick Viall's Bachelor season being announced, read on for a recap of all the things that got Bustle's editors talking today.

Donald Trump + Person Of The Year

Few were surprised when, early Wednesday morning, it was announced that Donald Trump is TIME 's Person of the Year. Remember, the title isn't about who's the "best" or most-liked person in a given year, but who's the most influential and important, and like it or not, it's undeniable that the president-elect changed the game in 2016, completely remaking politics as we know it.

Fun Fact: Despite calling it a "very great honor" to be named Person of the Year, Trump (unsurprisingly) has been critical of TIME in the past, calling it, among other things, "really flimsy like a free handout" back in 2013. Guess he changed his mind?

Start stocking up on wine and rose petals, because the next season of The Bachelor is coming up fast. On Wednesday, the 30 women who will be vying for Nick Viall's heart were revealed, and they're certainly an eclectic bunch, ranging from a chef to a nurse to a lawyer to a doula. One thing many of the ladies seem to have in common? Dolphins. Yes, really.

Don't freak out just yet, but according to a new report in Us Weekly, Kim Kardashian is allegedly considering divorcing Kanye West. A source claimed to the magazine that Kardashian is reportedly "building a case" to get full custody of the couple's two kids, North, and Saint. It's all rumors at this point (Bustle reached out to Kardashian's rep for comment, but did not receive a response), but Kimye fans might want to keep their fingers crossed just in case.

Yaaas, Queen: Broad City Season 4 officially has a release date, y'all! New episodes of the R-rated comedy will return in August 2017 (I know, I know, still so far away). Get pumped.

In the latest episode of Bustle's Love, Factually, two psychologists explain the science behind why getting shut down hurts as much as it does. Our brains are wired to hurt when we experience rejection, but that doesn't mean that all people experience it the same. “People who are not well differentiated may be more sensitive to rejection, because they’re still very enmeshed with people around them and taking their cues about their value and own self worth from other people," explains Dr. Alice Sohn. Meaning: the better you know yourself, the less painful rejection will be.

Shopping Break: Star Wars fans, listen up: your Rogue One premiere night attire just got way more festive. Torrid's Rogue One collection features T-shirts, dresses and more inspired by characters like Jyn Erso, and then there's this round-up of all the ugly Star Wars Christmas sweaters you could ever want. May the fashion force be with you.

YA + Your Next Book Club Picks

In the past couple o years, the young adult (YA) genre has gained a lot of respect, with high-quality books like The Fault in Our Stars and the Harry Potter series reminding everyone that teen-led works can, and should, be read by all. And 2016 had a surplus of must-read YA, from Nicola Yoon's latest love story to Sabaa Tahir's sequel to An Ember in the Ashes. Check out why those two novels and more made Bustle's list of the 30 best YA books of 2016.

Holiday Gift Tips: Have a big reader in your life? These 15 stocking stuffers are perfect for book lovers, whether they're looking for adorable bookmarks or Jane Austen-inspired pencils.

What To Watch: Theater geeks rejoice, because tonight, it's all about Hairspray Live! . Check out NBC at 8 p.m. to watch Ariana Grande, Kristen Chenoweth and more belt out tunes from the iconic Broadway musical.