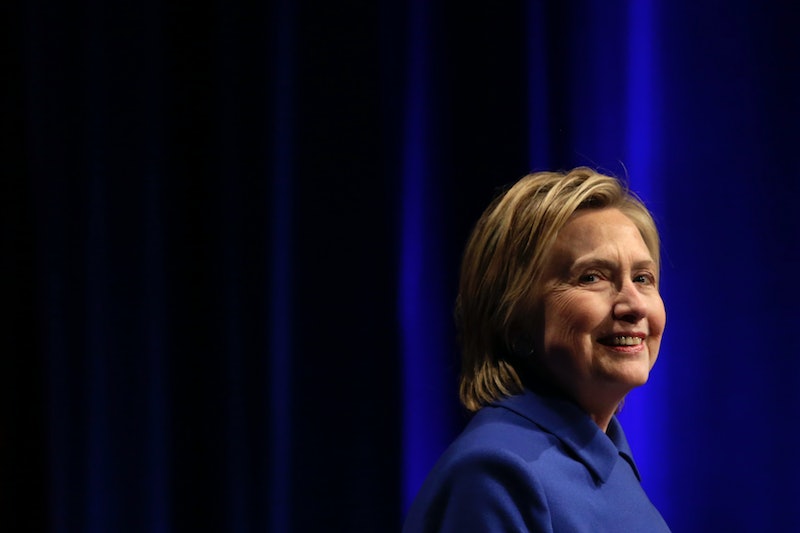 It's that time of year again: the list of TIME's Most Influential People 2016 has been released, so we can reflect on how people made their mark this year. Perhaps unsurprisingly, Donald Trump took the top spot as TIME's Person Of The Year 2016, after being named runner-up to German Chancellor Angela Merkel last year. For better or worse, the president-elect been talked and talked and talked about all year long, and needless to say, some people are unhappy with TIME's choice. However, it's worth noting that the rest of the top 100 list does contain tons of powerful, inspirational women that made strides this year.

Historically, women have gotten the short end of the stick when it comes to TIME's Person of the Year award. Only four (!!) solo women (aka not a collective entity like the Ebola Fighters of 2014) have ever been named Person of the Year, and it wasn't even until 1999 that the award's name changed from Man of the Year to the more inclusive "Person of the Year." Still, it's comforting to know that plenty of women are badass enough in their own right to make the top 100 list, and hopefully someday the ratio of male to female winners will be more balanced.

In the meantime, let's acknowledge and celebrate these 40 awe-inspiring women who made the cut and secured a spot on this year's list of most influential people (in no particular order).

Duh, of course your girl HRC had to make the list — despite her loss in the presidential election, she's been massively influential this year and more than deserves a spot on the list.

Minaj is more than an artist: she's an icon and role model for girls everywhere. She promotes body positivity, has killer style, makes amazing music, and isn't afraid to be a boss.

Since she came out in 2015, Jenner has been one of the most well-known transgender celebrities out there. She's an incredible athlete and former Olympian, beloved member of the Kardashian/Jenner clan, and more than deserves recognition for her courageous decision to come out.

Esserman and Hwang are two of the leading breast cancer doctors out there, and their groundbreaking research will hopefully lead to better treatment options for women with a breast cancer diagnosis.

As an environmental activist and head of the New Delhi–based Centre for Science and Environment, Narain advocates for policies that will help stop climate change.

Professionally, Jahren is a professor at the University of Hawaii at Manoa, where she studies fossilized plant life. But she's also been outspoken about the struggles women in STEM face — like sexual harassment and workplace discrimination — and details it all in her new memoir, Lab Girl.

Murad is a "witness for war victims" who speaks about the horrors she faced when, at age 19, she saw family members murdered and herself was kidnapped, sold, and repeatedly raped by members of ISIS. Now 23, she travels the world, speaking about the genocide of her people and advocating for the many women still being held against their will.

Dr. Hanna-Attisha was one of the key players in the Flint water crisis: as a local pediatrician, she tested the kids of Flint to prove they'd been poisoned by lead in the water. Her bravery helped spark a national conversation about the injustice facing residents of Flint, Michigan.

Figueres is a Costa Rican diplomat with 35 years of experience with policy negotiation. As Executive Secretary of the UN Framework Convention on Climate Change, she helped seal the 2015 Paris Agreement, a landmark deal that outlines plans to stop climate change and lower greenhouse emissions.

The Jane the Virgin star is an inspiration to young women everywhere: she's all about embracing your body, your roots, and your passions, and uses her platform to speak out about things like mental health and body positivity.

Niakan is a developmental biologist who focuses on human development and stem cell biology. Through her experiments manipulating the human genome (and altering DNA), we can hopefully learn how to prevent certain diseases, and improve human health as a whole.

Ledecky is a beast in the pool, and was undeniably one of the stand-out stars of the Rio Olympics. At just 18, she became the most decorated female athlete at the 2016 Olympics, winning gold in four events and breaking two records in the process.

This husband and wife pair are the very definition of a power couple. Together, they founded the Chan Zuckerberg Initiative, and even committed 99 percent of their wealth to important causes like improving education, curing disease, connecting people and building strong communities.

Kennedy is a film producer — she's worked on iconic films like Jurassic Park and E.T. the Extra-Terrestrial — and is also the president of Lucasfilm, aka the company behind Star Wars.

Henson is an actress and singer best known for her role as Empire's Cookie Lyon, for which she won a Golden Globe.

McCarthy is an American actress who can always make audiences laugh. Most recently, she's blessed us by (briefly) reprising her role as the hilarious and erratic chef Sookie St. James in Gilmore Girls: Year in the Life.

Elena Ferrante is the pseudonym of an Italian author whose best-known work is the four-part Neapolitan Novels, which paints a picture of what it's like for two young women growing up in Naples during the mid-20th century.

Grande is a powerhouse: her album Dangerous Woman debuted at number two on the US Billboard 200. Her most recent venture? Taking on the role of Penny Pingleton in Hairspray Live!, which premiered December 7 on NBC.

Pei is a Chinese fashion designer who rose to international fame after dressing Rihanna at last year's Met Gala. She now boasts a showroom in Paris, a MAC collaboration, and a special-edition cover of Vogue.

From Seinfeld's Elaine Benes to Veep's Selina Meyer, the many characters of Louis-Dreyfus have been stealing hearts for decades.

Though best known for her work as an actress, Theron is much more: she's super involved with her foundation, the Charlize Theron Africa Outreach Project, and works tirelessly to raise awareness about and prevent HIV/AIDS.

Kusama, 87, is a Japanese artist and writer, who's noted as a "precursor to the pop art, minimalist, and feminist art movements" — she's even one of Andy Warhol's influences.

Though she got her start in Bollywood, Chopra has transitioned into an international TV and film star — she's currently the lead in Quantico.

Natalicio is the long-standing president of the University of Texas at El Paso, and is lauded as an advocate for first-generation, low-income students.

Robinson is an Air Force General who is currently commander of the U.S. Northern Command as well as commander of the North American Aerospace Defense Command — more importantly, she's the first woman to serve as a combatant commander.

Queen Máxima of the Netherlands is more than just another royal face on a stamp: she's passionate about economic empowerment, and uses her role as the U.N. Secretary-General’s Special Advocate to effect change.

Aung San Suu Kyi is a Burmese politician, diplomat, and author who's an advocate for democracy, and is helping guide Burma's first civilian government in more than 50 years.

As an infant in her native Gambia, Dukureh had her external sexual organs amputated. Now, she speaks out against the horrors of genital mutiliation, and founded Safe Hands for Girls which fights against the practice.

Tsai Ing-wen is a Taiwanese politician who's currently serving as the President of Taiwan — and she's the first unmarried person to do so.

Haley is the governor of South Carolina — aka the state where Walter Scott was shot by a police officer — and has been lauded as a graceful, compassionate leader in what has been a particularly rocky year for the state.

Merkel, last year's TIME Person of the Year, is the Chancellor of Germany and the leader of the Christian Democratic Union.

Since 2011, Lagarge has been the Managing Director of the International Monetary Fund — the first woman to do so. She was also named Forbes' fifth most powerful woman in the world in 2014.

Robinson is an American novelist whose works include Housekeeping, Gilead, and Home.

In addition to being an international supermodel, Kloss has been outspoken about the importance of encouraging young girls to join male-dominated fields, like tech and coding.

Tu is a Chinese pharmaceutical chemist who, in 2015, became the first woman in China to win a Nobel Prize.

Mirza, who was born in Mumbai, India, is a professional tennis player, currently ranked number one in women's doubles.

Rousey is a mixed martial artist and the first U.S. woman to earn an Olympic medal in judo, which she did back in 2008. Since then, she's risen to fame in the world of UFC and is currently the number two ranked female bantamweight fighter.

It's been more than a year since Adele said "hello" again, but her musical influence remains as powerful as ever. Released in November 2015, her third studio album 25 has continued to impact listeners globally.

At the end of what's been a pretty rough year, TIME's Most Influential list has offered a bit of light in the darkness. Although the sexes are still far from equal in many ways, the realization that these 40 empowering, talented women are out there inspiring younger generations is a much-needed comfort.

More like this
Your Guide To Earth Signs
By Nina Kahn
Everything To Know About The Terminal List Season 2
By Kadin Burnett
6 Shows Like Stranger Things To Get Over Your Emotional Season 4 Hangover
By Kadin Burnett
What’s An Open Relationship, Actually?
By Lexi Inks
Get Even More From Bustle — Sign Up For The Newsletter